I. POPE FRANCIS AND THE CHURCH

POPE FRANCIS ON HOMOSEXUALS IN PRIESTHOOD
"No place for that kind of affection."        A fuller set of answers from new book interview.

DEATH OF BISHOP MORLINO: Bishop Robert Morlino of Madison Wisconsin died of a heart attack this week. Here is a priest reading an August 18 letter from Morlino to his diocese about the abuse crisis. It is a bracing letter. RIP.

CLERICALISM AND SODOMY: A chilling historical narrative by a priest from Florida.

HONDURAS: The caravan to the US began in Honduras. Where are the nation's fathers? Where are the authorities to care for the people fleeing their country? There are 9.5 million Hondurans. Half are Catholic; 35% Protestant. The people flee when the civic and religious leaders have failed. Here's what some of the highest Catholic clerics have been up to.

FIX YOUR OWN DIOCESE FIRST--IT IS HARDER AND IT TAKES MUCH MORE COURAGE AND PRUDENCE. BUT ONLY IN SUCH LOCAL TRUTH TELLING BROTHERHOODS WILL THE NEW MASCULINE PERSONALITIES EMERGE NEEDED TO RENEW THE APOSTOLIC CHARACTER OF CATHOLIC MANHOOD.
Every diocese and every national conference needs a purging. There can be no purging unless there is serious investigation. Serious investigation does not need Rome except in the serious investigation of Rome. In fulfilling this investigative and reporting duty, we must salute the work of Michael Voris and his group at Catholic Militant. Every diocese needs a similar serious investigative group without the breathless visual reporting. First make a dossier--the forum for its best publication is not always weekly public consumption.
American Catholics should first live the joy of the gospel and carry on our communal life of worship, ordered love, useful work and acts of mercy. At the same time fraternities of laymen, priests and bishops should communicate and gather to name the traitors in our midst. This must happen at the local level first. The New York and Washington Catholic media elite should spend  their time exposing the huge homosexual networks in those two dioceses and quit tearing down the Holy Father.
Kill the Father, Pope Francis should resign, Impeach President Trump! These cries come from the demonic sexual confusion set against the patriarchy of God, the apostolic fraternity of the priestly Church and the masculine character of civic rule. The Pope says there is a Satanic element in the desire to destroy the fraternity of the bishops with the Pope. He says the Accuser wants to expose the faults and failures of bishops (including the Bishop of Rome) to tear down the whole structure. That is absolutely true. It does not mean  bishops should never be exposed, removed and condemned. The Catholic right yells, "He is calling Vigano the devil." Vigano's overreach in calling for Pope Francis to resign was a deceptive distraction from the letter's far more important exposures of evil. Maybe the Evil One can stain even a truthful letter and the self serving pride of Vigano was a portal of entry.
The Vatican should have shut down the American bishops's lame attempt at new procedures.  It is not going to be a lay committee who will reform the church. It is going to be bishops truly speaking personally and directly to the traitors among their local bodies.  There was a tiny tiny hint of that at the last Bishop's meeting. A lot more honest accusations are needed and soon.  Let's hold on the new "policies". Patriarchal fraternity is the Apostolic form Christ laid as the foundation stones of His Church. A renewal of that male public form of fatherly and fraternal love will reform the priesthood.  It will be a reformed synod of bishops with the pope. It will be a presbyteral synod of priests with a bishop. It will be a few monks and a new abbot in a monastery. It will be a household or province of reformed Jesuits or reformed Dominicans calling out others those depraved orders. It will be brotherhoods of laymen and priests telling the truth and building the bonds of brotherhood which are the antidote to homosexual cliques and clericalism. These public brotherhoods are the path and the model toward a reformed  apostolic priesthood which remains the icon of the Father's love for the Son and the template for the nations.
Catholic men avoid building Catholic brotherhood in our own parishes and dioceses because it takes commitment and will surely lead to conflict. It is much easier to play the Wizard of Oz in the world of TV, You Tube,  and blogs. It is easier to decry the Father in Rome than gather men face to face to investigate and then confront local priests and the local bishop.  It is not obvious how to light up  the homosexual dens masquerading as religious orders in one's own county. But it must be done and not by the Pope.  Let us fast and pray for courage. Let us light a thousand local fires and pull back the rifles aimed at Pope Francis.

MIDEAST CONFERENCE: Very good discussion on Mideast at conference sponsored by The American Conservative telling the difference between friends and enemies. They seem clueless on religion but many of the participants know the area they are covering very well, especially Joshua Landis on Syria and the Iraqi expert, Abbas Kadhim from Johns Hopkins.

PEACE TALKS IN AFGHANISTAN: Afghan government and Taliban begin talks. This could be the beginning of the end.

FIGHTING CONTINUES IN SYRIA: Staying in Syria to fight Iran. A nationalist foreign policy would treat Syria as a nation with the right to make its own allies. Loving one's country leads to one set of policies. Hating some other country leads to another. We have adopted the shared hatreds of Saudi Arabia and Israel for Iran. This is the neocon policy that Jeb Bush, Hillary Clinton, Ted Cruz, Marco Rubio, Lindsey Graham, and John McCain all have advocated. President Trump is more bold and forthright than them. He is no less horribly wrong. Where is the anti-war Left when you need them?

SAUDI HISTORY: Caspian Report on History and Nature of Saudi Arabia. They do these kind of presentations very well. A good introduction to understand the country. Less than half an hour. The showdown with Saudis will be over Yemen. That is the right first objective. A senate resolution to defund the war.

THANK YOU FOR YOUR SERVICE: American soldiers look at "thank you for your service" and the militarization of American foreign policy. Also conscription, volunteer army, and the loss of a republican notion of the citizen soldier. A terrific discussion from needed voices. It would be great if Fox News would use some of these guys instead of Canadian, Australian, and British "conservatives" and in laws from the Weekly Standard to generate serious American commentary.

WOMEN IN COMBAT: General Stanley McChrystal is against Robert E Lee and for women in combat. A lot of crew cut veterans are going to become gender warriors as they try to get the Democratic nomination for President.

BRITISH COLLUSION: Why British intelligence is so against a release of documents in Trump collusion matters. They will show deep collusion of British and Australian intelligence in Trump dossier. Brennan helped because he hated Trump. The Brits helped and led in many ways because they do not want a US-Russia alliance which would downgrade their role in the world. It is very hard for conservative media to understand white Anglo speaking "allies" can be enemies to our nation.. It took a real American nationalist like Donald Trump to expose the rift between the interests of the British Empire and the American nation.

MEDIA COVERS NATIONALISM: Powerline discovers Nationalism. Great! A talk by Israel's greatest public intellectual - Yoram Hazony, author of The Virtue of Nationalism. Hazony is unlike most public Jewish intellectuals in America. Hazony believes in a living God and worships Him. He not only thinks and writes. He prays. His thinking is a fruit of his ongoing submissive posture toward G-d and his careful reading of Providence in history. The talk is excellent and the questions from Yale students are very impressive revealing even more about Hazony's project. The last question he fields is on God and nationalism. He contrasts empiricism, Protestantism, and nationalism vs. the universalizing rationalism of the Enlightenment. Stay for it all. Another short talk by Hazony to a Jewish think group: God, Nationalism, Conservatism, Judaism.

A FRENCH NATIONALIST: Charles DeGaulle and the Nation.

A HUNGARIAN NATIONALIST: Profile of Viktor Orban of Hungary. There is no-one in Europe as clear as the Hungarian leader that Communism and Secular Liberal Democracy are fruits of the same Enlightenment tree. Christianity, nations, and marriage are the forms that cultivate the sacred bonds which elevate human life as a participation in a sacred order. Orban loves Christian Europe as a Europe of nations. He considers liberal democracy an enemy of the higher goods and advocates Christian democracy (or "illiberal democracy"). The "disenchanted cradle of western modernity" has given us spirituality without religion, fluid genders, and open borders. Christianity develops through a culture of patriarchal religion, territorial nations, and monogamous heterosexual marriages. One is formless and leaves us with autonomous individuals. One has forms which prepares us for the sacred bonds which lead to Everlasting Life.

ISRAELI SJW'S: David Goldman on the replacement of Judaism with Social Justice warriors. A brilliant faithful analysis culminating in the nation of Israel as the paradigm of a sacred covenant under God.


THE KERCH STRAIT: Democratic loving peaceful Ukraine against Russian thugs? Maybe Not. Russia considers the Kerch Strait to be inside territorial Russia. They expect any ship passing through to apply for permission. For them this was like an attack on Crimea proper. For   Ukraine both Crimea and the waters off its coast are part of Ukraine. A deliberate provocation before an election the present president was losing. The US media can't be troubled by details. They have an explanation. "Putin is like Trump. He is a bully." No more story needed. Pat Buchanan has a little more historical approach asking Why should the US fight for Kerch? 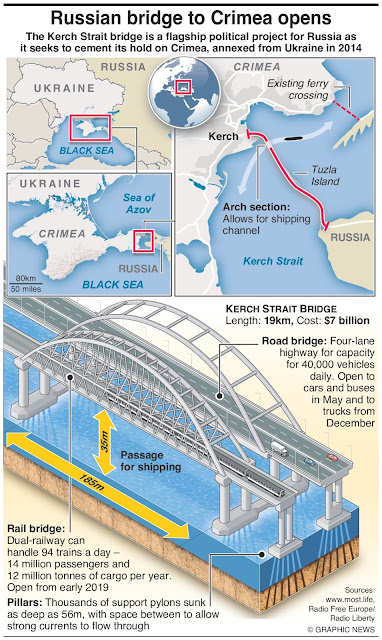 SACRED KINGSHIP: A Chicago lecture on the sacral nature of kingship by Francis Oakley. Legitimate political leadership must maintain the body politic in harmony with the Cosmic Order.


CONTROLLING INSTITUTIONS: Cultural traditionalists can win the baby war but if we don't control socializing institutions like media and schools, the atheistic moderns will beat us through our own children coming of age.

CASUALTIES OF THE SEXUAL REVOLUTION: Last Tango in Paris(1972). What happens to women who participate in real or simulated sex scenes on camera? Does it damage them in a far more substantial and lasting way than male counterparts? The firing of David Edelstein as film critic for his "butter joke " on the death of Bernardo Bertolucci reminds us of the rape screen in Last Tango which was added to the script and foisted on the 19 y/o actress Maria Schneider by 48 y/o Marlon Brando and Director Bertolucci. There was not "real penetration" but the scene was filmed and shown to the world. Bertolucci wanted authentic fear and tears from his actress so he didn't tell her what Brando was going to do to her in that scene. Her tears and terror were real. Her humiliation was real. Her subsequent acting and moral life was in shambles. A lot of very hip people think Last Tango in Paris was "an important movie." This is not a "me too" moment but a time to reflect on the horrible consequences of the sexual revolution which unveiled what is meant to be covered and sacred.
Posted by anthropology of accord at 10:00 AM