John Ireland - the Patriotism of a Patriarch


[Mary Hill was the Catholic wife of railroad tycoon James J. Hill. The mother of ten children was able to convince her husband to make large donations to the Archbishop's building projects.

Alexander Ramsey was governor of Minnesota when the Civil War broke out; and a decade later served as Secretary of War.]

Excerpts from a speech by John Ireland (d. 1918), posted at 'The American Catholic' website:


Pagan nations were wrong when they made gods of their noblest patriots. But the error was the excess of a great truth, that heaven unites with earth in approving and blessing patriotism; that patriotism is one of earth’s highest virtues, worthy to have come down from the atmosphere of the skies.

The exalted patriotism of the exiled Hebrew exhaled itself in a canticle of religion which Jehovah inspired, and which has been transmitted, as the inheritance of God’s people to the Christian Church:
"Upon the rivers of Babylon there we sat and wept, when we remembered Sion.—If I forget thee, O Jerusalem, let my right hand be forgotten. Let my tongue cleave to my jaws, if I do not remember thee, if I do not make Jerusalem the beginning of my joy."

Patriotism is innate in all men; the absence of it betokens a perversion of human nature; but it grows its full growth only where thoughts are elevated and heart-beatings are generous.

Next to God is country, and next to religion is patriotism. No praise goes beyond its deserts. It is sublime in its heroic oblation upon the field of battle. "Oh glorious is he," exclaims in Homer the Trojan warrior, "who for his country falls!" It is sublime in the oft-repeated toil of dutiful citizenship. "Of all human doings," writes Cicero, "none is more honorable and more estimable than to merit well of the commonwealth."

Countries are of divine appointment. The Most High "divided the nations, separated the sons of Adam, and appointed the bounds of peoples." The physical and moral necessities of God’s creatures are revelations of his will and laws. Man is born a social being. A condition of his existence and of his growth of mature age is the family. Nor does the family suffice to itself. A larger social organism is needed, into which families gather, so as to obtain from one another security to life and property and aid in the development of the faculties and powers with which nature has endowed the children of men.

The whole human race is too extensive and too diversified in interests to serve those ends: hence its subdivisions into countries or peoples. Countries have their providential limits—the waters of a sea, a mountain range, the lines of similarity of requirements or of methods of living. The limits widen in space according to the measure of the destinies which the great Ruler allots to peoples, and the importance of their parts in the mighty work of the cycles of years, the ever-advancing tide of humanity’s evolution.

The Lord is the God of nations because he is the God of men. No nation is born into life or vanishes back into nothingness without his bidding. I believe in the providence of God over countries as I believe in his wisdom and his love, and my patriotism to my country rises within my soul invested with the halo of my religion to my God. 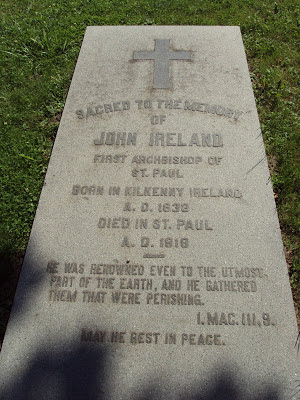 Archbishop Ireland thought America had a special claim on him for its foundation in Christian brotherhood under God. Here is how he explained the country we call our own:


America born into the family of nations in these latter times is the highest billow in humanity’s evolution, the crowning effort of ages in the aggrandizement of man. Unless we take her in this altitude, we do not comprehend her; we belittle her towering stature and conceal the singular design of Providence in her creation.

When the fathers of the republic declared "that all men are created equal; that they are endowed by their Creator with certain inalienable rights; that among these are life, liberty, and the pursuit of happiness," a cardinal principle was enunciated which in its truth was as old as the race, but in practical realization almost unknown.

Slowly, amid sufferings and revolutions, humanity had been reaching out toward a reign of the rights of man. Ante-Christian paganism had utterly denied such rights. It allowed nothing to man as man; he was what wealth, place, or power made him. Even the wise Aristotle taught that some men were intended by nature to be slaves and chattels. The sweet religion of Christ proclaimed aloud the doctrine of the common fatherhood of God and the universal brotherhood of men.

Eighteen hundred years, however, went by, and the civilized world had not yet put its civil and political institutions in accord with its spiritual faith. The Christian Church was all this time leavening human society and patiently awaiting the promised fermentation. This came at last, and it came in America. It came in a first manifestation through the Declaration of Independence; it came in a second and final manifestation through President Lincoln’s Proclamation of Emancipation.

In America all men are civilly and politically equal; all have the same rights; all wield the same arm of defense and of conquest, the suffrage; and the sole condition of rights and of power is simple manhood.

Born in County Kilkenny in 1838 (September 11th), John Ireland was ordained a priest in Minnesota in 1861 -- and went off to serve as a chaplain in the Civil War. In 1888 he was named the first archbishop of Saint Paul. One of his strengths was building seminaries, churches, and schools. (A review of Marvin O' Connell's excellent biography )

"A person may be faithful; he may have the power to utter hidden mysteries; he may be discriminating in the evaluation of what is said and pure in his actions. But the greater he seems to be, the more humbly he ought to act, and the more zealous he should be for the common good rather than his own interest."
(Pope St. Clement, martyred about 99 AD)
Posted by Farmer at 3:00 PM