John Vianney (1786-1859) is the patron saint of parish priests. He worked in a French town of less than 500 souls called Ars, and is often called the Cure of Ars. [It is about 90 miles west of Geneva, Switzerland].

'Cure' in French means priest. The Webster word history is instructive. The old Latin word 'cura' meant "the care given to someone, often medical." Christians expropriated the word to mean "the care of souls." The Latin root passed into French, and then English, with this spiritual meaning as cure in French meaning priest and curate in English meaning "one who takes care of souls, a member of the clergy." This word history reminds us that cultures can sacralize language as well as debase it. What a culture does to the words it receives, depends on what kind of life the people are living in that culture.

Jean Baptiste Marie Vianney was no star in his seminary studies. Thank God his superiors recognized his great soul garbed with a modest mind. He received his earliest sacraments in the underground French Church, avoided Napoleon’s draft to fight the disastrous war against Spain, and was ordained in 1815. His piety, prayer, and penance made his parish a gravitational center for Catholic renewal in post-revolutionary France. He knew the basics. God had become man in Christ; the priest had become sacred in ordination; and the souls of his parishioners would be sanctified only through prayer and penance.

The humble priest provides for us an antidote to living public life "as if God doesn’t exist." The French priest had a cure for practical atheism. He built his life on prayer. He centralized the tabernacle’s sacred space in gesture and building to proclaim Jesus present. He saw men as souls. In his celebration of the Mass, he directed all present to the reality of the Triune God. In the confessional he did not turn his head from the hold of Satan on unresolved penitents. He chastised those who repeatedly failed to "amend my life." 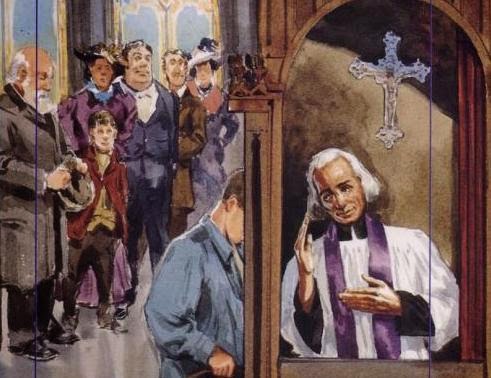 The local parish is still today the physical and communal form of Christ’s Presence shining through the sulfurous mist of practical atheism. The priest is a watchman for the city of God whenever he mounts the walls of the confessional to beat back Satan assaulting the people. The Catholic life is a daily, weekly, and annual set of practices organizing a community of prayer around a sacred space and Personage. The priest prays the daily office of Church in communion with the worldwide apostolic priesthood, and puts on the mind of Christ for his local flock by this practice. Keeping Catholic time draws the local face-to-face body into the Universal Church, and the day-to-day calendar into the timeline of the Divine Drama. The antidotes to the foggy atmosphere of practical atheism are the tabernacle lights of countless parochial sacred hills where men worship the Father. As Jesus promised the woman at the well, there shall come a time when worship is no longer restricted to the mountains of Jerusalem and Samaria. That time has been achieved through the coming of the Spirit in the sacramental Church. Let us rejoice and be glad!

The priest is not a community organizer urging his parishioners to do public service projects or postcard-campaigns to lobby the civil authorities. He mans an ark and pulls us into a sacred space where we are set apart from the corrupting flood-waters of the world. Once in the ark, man can finally see reality with his head above the waters. He has been saved and is enlightened. He understands his purpose because, finally, he stands and kneels where he is fully oriented in space and time to the Divine Person. The parish priest directs hearts to God and cleanses souls of sin. He leads us in prayer, integrates us in the sacramental order of the Church, and teaches us the pillars of the faith -- which explain Nature, History, and Person in the light of Christ. The practicing Catholic becomes a new personality. These new Christian personalities shaped by communal liturgy and prayer will feed the hungry, heal the sick, enlighten the ignorant, protect the widows and orphans, and shelter the immigrant. The men will build cities and nations while the women will build homes, schools, and hospitals. The men will be apostolic in their communal public character, and the women will be virginal in their interior lives and maternal in their care of others. Catholic practice shapes Catholic personalities, and that practice is as tactile as it is local.

Seek first the things above and all else will follow. Holy priests make holy men and holy women. There is only one kind of village that explains the Cosmos -- the parish at prayer. The local parish has never been the end game of the careerist. But it remains the locus of prayer and penance where practicing Catholics muster in the formations which proclaim the Sacramental Presence of Christ in those golden tabernacles, and herald the Final Coming of our Lord and King just over the horizon.

From the Catechetical Instructions by St. John Mary Vianney:

Man has a noble task: that of prayer and love. To pray and to love, that is the happiness of man on earth.

Prayer is nothing else than union with God. When the heart is pure and united with God it is consoled and filled with sweetness; it is dazzled by a marvellous light. In this intimate union God and the soul are like two pieces of wax moulded into one; they cannot any more be separated. It is a very wonderful thing, this union of God with his insignificant creature, a happiness passing all understanding...

Our prayer is an incense that is delightful to God... My children, your hearts are small, but prayer enlarges them and renders them capable of loving God... In a prayer well made, troubles vanish like snow under the rays of the sun.


May Saint John Vianney guide many parishes and their local priests into a prayerful weekly rhythm of the Catholic sacramental order: Baptism, Confession, and the Eucharist.