Thanksgiving Day is an embarrassing holiday for the atheists. Whom should one thank?

Nonbelievers first turned this day of formal national prayer into a rekindling of an earlier bliss betwixt Pilgrims and Indians. A little rewriting, and secularists turned the feast into a memorial of Pilgrim settlers thanking the native-born Americans for their ecological wisdom that allowed us a full table and survival through the winters. As usual, the guilt-ridden white folk reminded us of something true but missed the real story. There were formal acts of prayerful thanksgiving before we became a nation but unfortunately for the Protestant imagination the first such acts were in that old liturgical  form of the Catholic Mass.

The Pilgrim parable was soon debunked by Indian activists who reminded the well-meaning storytellers that the only gifts white men gave Indians were smallpox blankets. "Who wants to celebrate that, white man?"

Instead of returning to the first Congress or Washington or Lincoln to get the holy day back on track as a civic duty of a repentant nation to a Sovereign God, our adaptable consumer culture had a new answer. Let the appetites be sacralized! There was a surge to elevate not "Whom We Thank" but "What We Eat." Turkey Day was proclaimed! 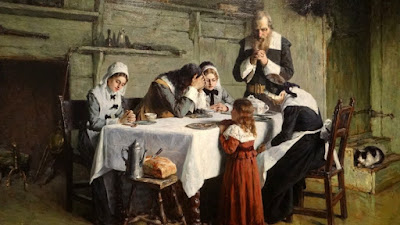 Contrast our evolving celebration of  Black Friday Eve with George Washington’s understanding of Thanksgiving Day in the first sentence of his 1789 Proclamation:


“Whereas it is the duty of all nations to recognize the providence of Almighty God, to obey His will, to be grateful for His benefits, and humbly to implore his protection and favor…”

Contrast Turkey Day with the content of his prayer:


“And also that we may unite in most humbly offering our prayers and supplications to the great Lord and Ruler of nations and beseech Him to pardon our national and other transgressions -- to enable us all, whether in public or private stations, to perform our several and relative duties properly and punctually…”

This is a day as a nation we are supposed to perform a religious duty -- to ask forgiveness and give thanks to a Divine Ruler who governs not only the lives of men, but the public communal forms of men: the nations. That is what Congress requested Washington to declare; and that is what this national day of prayer for forgiveness and thanksgiving is still meant to be. Let us assemble in our houses of worship, at community kitchens, and at our family tables but remember we are acting as members of the larger national political community.  Let us ask God forgiveness for turning away from Him and allowing these sacred goods to be defiled: His holy Name, our sacred flag, our national brotherhood, the institution of marriage, the protective love of mother for child, and the sacred virginity and innocence of our young. In Lincoln's words: "with humble penitence for our national perverseness and disobedience...we fervently implore the interposition of the Almighty Hand to heal the wounds of the nation and to restore it as soon as may be consistent with the Divine purposes to the full enjoyment of peace, harmony, tranquility and union."


UPDATE: Be sure to check out Andrew Lynch's essay.

The Thanksgiving proclamation of our First Continental Congress.
A reminder from "War on the Rocks" that Thanksgiving is a holiday forged in national wars.
Lincoln declared the last Thursday of every November as a national holiday at the bequest of Sara Josepha Hale, editor of the popular magazine, Godey's Lady's Book.