Libya has nine cities with populations over 100,000 – and all of them are on the Mediterranean coast.

[Where would you go to find another Mediterranean port city by the name of “Tripoli”?  In northern Lebanon.]

The next largest cities: Misrata, Bayda, Zawiya, Zliten, Tobruk (near the Egyptian border, it was the site of important WWII battles), Ajdabiya, and Derna. 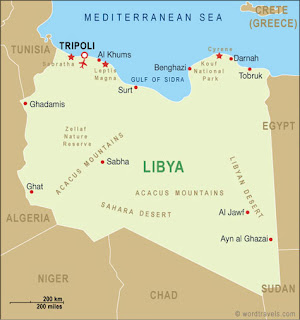 The area of Benghazi was originally founded as a Greek city.  The oldest coins minted there are from about 480 BC.
Benghazi was the first city to rebel against Muammar Gaddafi’s government in early 2011.

The coastal city of Surt (17th largest in Libya) was the final stronghold of forces loyal to Gaddafi.  Surt was his birthplace – and is also where he was captured and killed one year ago.


UPDATE: Be sure to check out this further link about Gaddafi's hometown, kindly sent to us by "Geographic Travels" blog.