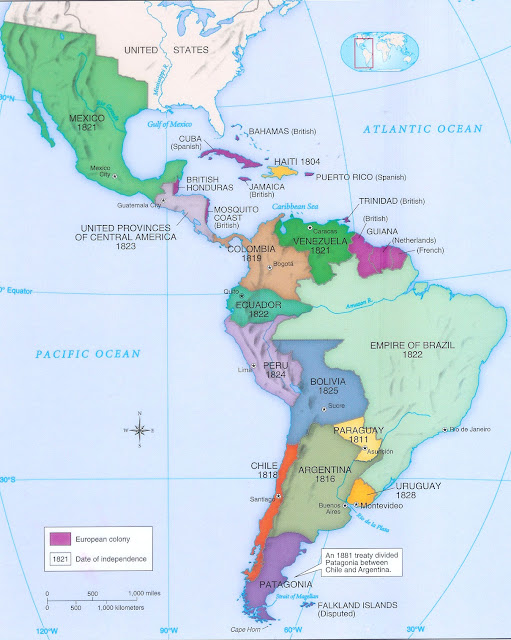 Although many of these nations struggle with internal political turmoil, the relative peace among the nations of South America is a testament to the peaceful fraternity of Christian nations. Where decolonization occurred throughout much of the world only after the Second World War, the rise of an independent South America, free of European rule, came rather swiftly during the first quarter of the nineteenth century.

While the national borders displayed on the map above have experienced some change, the broad shape of South America's Christian nations emerged from a series of revolutionary wars taking place at the end of the eighteenth and early nineteenth centuries. Here it is important to place these wars in the context of two previous revolutions: the American Revolution (1775-1783) and the French Revolution (1789-1799). The success of America's war for independence did not go unnoticed by its southern neighbors. Haiti would be the location of the first revolution in Latin America - and the successful uprising of its slave population startled the landed aristocracy of both the United States and the Spanish colonies.

It was the fateful rise of Napoleon Bonaparte through doors opened by the French Revolution, however, that set in motion the revolutionary wars of South America.

Driving the revolutionary cause was Napoleon's invasion of Portugal in 1807 and his overthrow of the Spanish government in 1808. Portugal's royal family fled to their largest colony, Brazil, while the colonies of Spain - which rejected the puppet rule of Bonaparte's brother - turned to self-rule until legitimate authority returned to power. When King Fernando VII came back to the throne in 1814, however, his colonial subjects resisted his rule as an absolutist monarch. Meanwhile, Brazil's breaking with the Portugal took place after the Portuguese king's return to Europe in 1821. Endangered by revolutionaries throughout his kingdom, John VI threatened Brazil's semi-autonomous status. This prompted the full independence movement of the Brazilians - led now by none other then John's son, Pedro. Brazil declared its independence on September 7, 1822 and Pedro was made the first Emperor of Brazil the following month. By early 1924, Emperor Pedro secured Brazil's military independence, and the Treaty of Rio de Janeiro in 1825 formally ratified the independence won on the battlefield.

The story of how Spain's South American colonies became independent can largely be told by the contribution of two military men: Simon Bolivar and Jose de San Martin. Bolivar's skills on the battlefield helped win independence for what would become Venezuela, Columbia, Panama, Ecuador, Peru, and Bolivia - all in the north of the continent. By far a better general than a politician, Bolivar was also no George Washington and he died on his way to a self-imposed European exile. See also our book review of Marie Arana's Bolivar. The Argentine, Jose de San Martin, fought against the French in Spain but returned home to help Argentina win independence, and later fought his way north to liberate Chile and then Lima, Peru.

All told, the independent Christian nation states of South America began to take shape by the mid-nineteenth century. The revolutions were won on the battlefield; and a shared Christian culture and memory of a pan-continental struggle against colonial forces sowed the seeds of peace between these new nations that persists to this day.