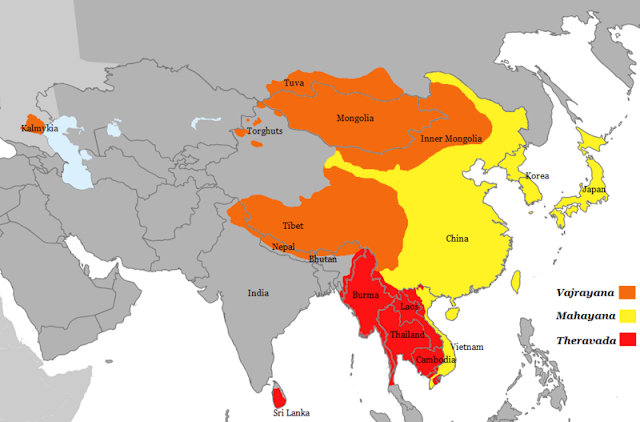 MAPPING THE THREE BRANCHES OF BUDDHISM
by A. Joseph Lynch

Buddhism traces its origins to India's Siddhartha Gautama in the fifth century BC. Upon becoming "the Buddha" (the "Awakened One") he proclaimed the Four Noble Truths and the Eightfold Path to nirvana (a state of mind in which one is awakened to the unreality of the self - and with the death of self comes the death of desire, which Buddha believed was the cause of all suffering). His first followers formed the Buddhist community (or "sanha") and took up a life of ascetic monasticism. Hinduism appropriated Buddha into its pantheon of Vishnu's many incarnations (or "avatars"), and in doing so Buddhism largely died out in the land of its birth.

Within a hundred years of Buddha's death, Buddhism divided into two sects: Theravada Buddhism and Mahayana Buddhism. As the way of the elders, the Theravada branch remained much closer to the original outlook of traditional Buddhism. It taught that the individual's pursuit of nirvana was paramount and that nirvana could be achieved only through one renouncing the world and embracing a life of ascetic monasticism. The more popular Mahayana (or "large vehicle") branch, however, divinized the Buddha and infused Buddhism with many religious practices that were accessible to the masses. What's more Mahayana Buddhism did not require monastic vows to attain nirvana. This branch also focused on compassion and celebrated the bodhisattva - those who put off their own nirvana in order to help others along the path before entering themselves.

A third major form of Buddhism is Tibetan Buddhism. This branch developed in Tibet during the seventh-fourteenth centuries AD, mixing Buddhism with local animistic and shamanistic practices. Religious and political leadership became united in the person of the Dalai Lama (or "big teacher"). The Dalai Lama is seen as the reincarnation of an important bodhisattva who helped many others attain the state of nirvana. Tibetan Buddhism is also known as Vajrayana (or "lightning") Buddhism as those who live it out can achieve nirvana at lightning speed - even as quickly as one lifespan without reincarnation.

As Buddhism spread outside of India, it traveled north, east, and south with each direction lending its name to each of the three major branches.

Although one would think Tibetan - or Northern - Buddhism is relegated to Tibet, its branch spread northwards to what is today Mongolia (55% of the total population) and even into Russia. It also comprises roughly 75% of Bhutan's population. With around 20 million adherents, however, Tibetan Buddhists make up less than 5% of all Buddhists. Despite its limited numbers Tibetan Buddhism receives much more attention than other branches due to the political movements surrounding the Dalai Lama and the popularity it has received through political activists, news media, Hollywood, and our modern culture's love for esoteric eastern religions. Although Tibet's unique religious-political history makes it quite unique from the rest of China, its status as both "the water tower of Asia" and also an impregnable wall against India (home of the Dalai Lama in exile) makes Tibet vital to Chinese geostrategy. Here China dabbles in religion as the Chinese government has declared its right to name the next Dalai Lama.