The Physical Ecology, Communal Loyalties, and Geopolitics of Burma 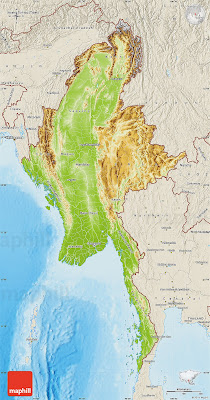 The core of Burma is dominated by the Irrawaddy river valley. The river runs north-south and roughly bisects the nation. At 1,348 miles in length and with a drainage basin 156,100 square miles (out of the nation's total of 262,000 square miles), it is also one of the most important rivers of Asia and home to various states and peoples over the centuries. The British Empire saw the value of this river and made its control an important imperial pursuit. Today the river generates electricity by way of hydroelectric dams. It acts as an important means of transportation, both in terms of people and goods (e.g. petroleum, cotton, timber, and local commodities). It also provides the water necessary for Burma's important rice production.

Protecting the Irrawaddy core has always been problematic for peoples inhabiting the river valley. To the north and west, highlands and mountains form borders with India, Bangladesh, and China. The Hengduan Mountains form a natural border with China in the north while the Arakan Mountains create a border with Bangladesh and India. This physical geography led Burma to have greater communications with its southeastern neighbors (modern day Thailand and Laos).

Eastern Burma is dominated by the Shan Hills, a sparsely populated region home to Burma's many mineral resources. These include jade, sapphires, rubies, lead, silver, and zinc. This area is also more amenable to travel and communication, making it - along with Burma's long border with Thailand - an easy point of entry for migrating peoples. Burma is also home to oil and natural gas, with roughly half of it's drilling onshore and half offshore. It has been exporting crude oil since 1853, and remains today a vital oil and natural gas exporter in Asia.

Myanmar is a South Asian country of 53 million. The largest ethnic group is the Bamar (70%). In 1989 the military government changed many English names (like Burma) to ethnic equivalents (Myanmar). 88% of the people are Theravada Buddhist. 6% of the country are Christian and 4% Muslim.

The ethnic Burmans—the people who ruled Pagan and dominate Myanmar today— didn't arrive until A.D. 9th century. Over a period of few centuries, they emigrated south from Tibet, passed through what is now the Yunnan Province of China and established settlements along the Irrawaddy River.
The ancestors of modern Laotians, Thais, Burmese and Cambodians originated from southern China. The Burmans appear to have migrated south from Tibet to Yunnan in China, along with several other linguistic and cultural groups, more than 3,000 years ago. Anthropologists see them  as southern Mongoloids.

Burmese is the official and most widely spoken language in Myanmar. Spoken by about 70 percent of the population, it is Tibeto-Burmese language, a subfamily of the Sino-Tibetan family of languages language, which also includes Kachin, Chin and several tribal languages spoken in the Myanmar-China border region. The mother tongue of the Bamar, it is linguistically related to Tibetan and to the Chinese languages.  Burmese is a tonal language—like Thai, Chinese and Vietnamese—with five tones (meaning that words or syllables with similar sound have a different meaning depending on the high, low, rising, falling or level tone or pitch of the sound).

After 1914, the Buddhist element became much more nationalistic, and highly resistant to Christianity. Most Christians are from minority ethnic groups. There was hostility toward the Christian Karens as well as Indian immigrants.  The Protestant population reached 192,000 in 1926, with the Baptists in the forefront. When the Japanese seized Burma in 1942, the British and American missionaries fled, but they returned in 1945. Independence from Britain came in 1947, and for years there was simmering tension and sometimes military action by the government against the Karens. This strengthened the Christian religiosity of the Karens minority, and deepened the hostility of the majority Buddhist population toward Christianity. In 1966 all foreign missionaries were expelled by the Burmese government,  The growth in conversions of minorities to Christianity was related to the rise of Buddhist nationalism, closely tied to ethnic Barma identity. The Chin minority group grew from 35% Christian in 1966 to 90% in 2010; the Kachin minority group likewise grew from 40% in 1966 to 90~95% in 2010.  Most Muslims live in the northwest provinces. The largest ethnic group of Muslims are the Rohingya who are not recognized as a native ethnicity eligible for citizenship (see below).

British colonization after the Anglo-Burmese wars (1824-85) brought many Hindus and Muslims from present day India and Bangladesh into Burma. (Best map explanations here). The Burmese nationalist movement in the 1920's portrayed the immigrants from the subcontinent as part of  British colonization. The newcomers dominated industries and the colonial government. They were never perceived as seeking a common Burmese citizenship with the locals. The Burmese nationalist movement  rooted their nationalism in indigenous precolonial ethnic identities and the Buddhist religion. In 1942, Japanese forces invaded Burma and during the British retreat communal violence erupted. Attacks were made against those groups that had benefited from British colonial rule. Burman nationalists attacked Karen and Indian communities, while in Arakan Rakhine, Rohingya villagers attacked one another causing a displacement of Buddhist villagers to the south and Muslims to the north. Many Burmese nationalists welcomed the Japanese as liberators of the nation from British Imperialism. Most prominent of these was Aung San (1915-1947), the Father of the Nation and organizer of the Burmese Independence Army(1941). The region remained under Japanese control until a British offensive drove out the Japanese in 1945. Prior to the Japanese invasion, the British, seeking to bolster support for their forces, had promised the Muslims of northern Arakan a Muslim National Area.

After Burma became independent in January 1948, tensions between the government and the Rohingya grew. Immediately following independence, a group of Arakanese Muslims went on the political offensive, pushing for the integration of Maungdaw and Buthidaung into what was then known as East Pakistan. That proposal was rejected by the Constituent Assembly in Rangoon. The government treated the Rohingya as illegal immigrants.

The immigration authorities imposed limitations of movement upon Muslims from the regions of Maungdaw, Buthidaung, and Rathedaung to Akyab [Sittwe]. Some 13,000 Rohinga still living in refugee camps in India and Pakistan whence they had fled during the war, were unable to return. Those who did manage to return were considered illegal Pakistani immigrants.

Beginning in 1950, segments of the Rohingya community resorted to armed action, led by armed groups called Mujahids. The Pakistani government in 1950 sent a warning to its Burmese counterparts about the treatment of Muslims in Arakan. However, Burma's Prime Minister, U Nu,  negotiated an understanding according to which Pakistan would no longer provide weapons to the Mujahids. In 1954, authorities in Pakistan finally arrested Cassim, the leader of the Mujahids. In November 1954, the Burmese army stepped up counterinsurgency operations in Arakan and quieted the rebellion.  Shortly after General Ne Win and his Burma Socialist Programme Party (BSPP) seized power in 1962, the government began to dissolve Rohingya social and political organizations. In 1977, Burmese immigration and military authorities conducted what they called Operation Nagamin (Dragon King), a national effort to register citizens and screen out foreigners prior to a national census. By May 1978, more than 200,000 Rohingya had fled to Bangladesh ( In 1971, the Bengalis of East Pakistan fought a war of liberation establishing Bangladeshi as a sovereign nation. 162 million strong, 98% Muslim, it is the world's 8th largest nation and 4th most populous Muslim country.)  The Burmese authorities claimed the Rohingya affinity for Bangladeshi was more proof that they were not really of Burma. Refugees reported that the Burmese army had forcibly evicted them and alleged widespread army brutality, rape and murder. (SECTIONS OF PRECEDING 3 PARAGRAPHS PATCHED FROM RELIABLE PUBLIC SOURCES)

A 1982 law defining Burmese citizenship deliberately excluded the Rohingya people (defining them as a Muslim Bangladesh ethnic group that settled in Burma under the cover of colonization) as a native ethnic group constituting the Burmese nation. They excluded as natives anyone who could not show ancestry before 1823. The 1 million members of the Northwest state of Rahkine (bordering Bangladesh) are thus considered stateless and were advised to return to their previous homeland. This narrative of all Rohingya only coming with the British is highly disputed by Muslims who claim much longer ancestory in Arakan where they were also persecuted in the 17th century.  In the last two years close to 10,000 Rahkine Muslims have been killed and 400,000 to 900,000 have fled-- mostly to  Muslim Bangladesh. It is ethnic cleansing by exile fed by brutal whole village exterminations to threaten those who might wish to stay. It is mindful of the wholesale ethnic/religous slaughter and mass migrations of the Indian partition in 1947 (15 million displaced; 1.5 million dead).

The replacement of Burma's military government (ruled 1962-2011) by the NLD party led by female democracy advocate Aung San Suu Kyi has actually increased the propensity of nationalist advocates to take to the streets and expel their Muslim neighbors. Like the Arab Spring, so called democracy movements often unleash deeper communal identities and hatreds which eventually shape the course of events. The American press has been fairly incoherent in explaining this story. The photo shots of Hillary Clinton toasting Aung Kyi attest to the poverty of the democracy plus female empowerment=progress narrative. In the 200 year struggle for Burmese nationhood, Aung San (1915-1947), the father of Aung Kyi and the Father of the Nation looms large. He was an organizer of the Burmese Independence Army(1941)  and sided with the Japanese initially in WWII as a fighting alternative to British colonialism. He was the founder of the Burmese Communist Party as well.  His assassination in 1947 left his daughter a symbolic figure of national identity. How that national identity will be formalized and who will lead the country is a work in progress. Here is one account that takes religion and history seriously in explaining the carnage and resettlement.

Religion, nations, and men - we must learn to speak the real grammar of history to understand these events. Buddhists expel "old Muslim invaders" in Myanmar.
Posted by Andrew Lynch at 7:00 AM