After The War; The Plague. The 1918 Influenza Pandemic


At 11 o'clock on the morning of November 11th, the guns of World War One finally ceased. Peace had been achieved.

But the cyclone of Death in 1918 got a huge second wind, and nations would be kept reeling by a tidal wave of influenza. Mankind had not seen anything like it since the Black Death in the middle of the 14th century:

"It is estimated that five hundred million people contracted it – a third of the global population in 1918 – and that between fifty and a hundred million of them died. Asians were thirty times more likely to die than Europeans." 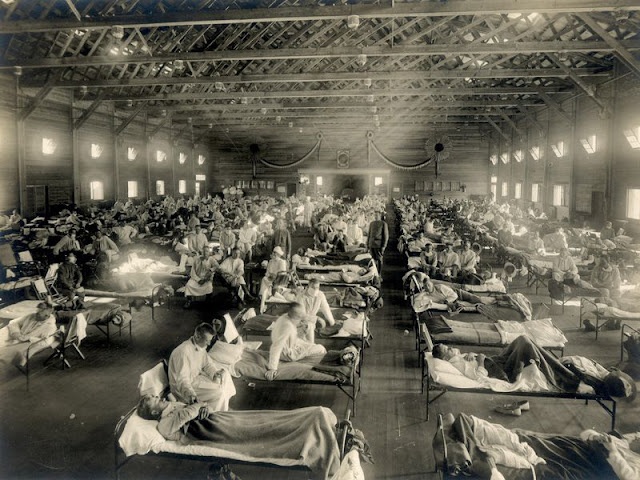 "In India 6 per cent of the population died [17 million]...  Koreans and Japanese were infected at the same rate, but the Koreans, subject to chronic malnutrition, were twice as likely to die. In the United States, Italian immigrants died at twice the background rate (the Italian neighbourhoods of New York had a density of five hundred per acre, ten to a room), while black populations were the least affected."

It came to be called Spanish flu "when it swept through Spain, and sickened the king; the press in Spain, which was not at war, wrote at length about the disease, unlike the censored press in warring countries, including the United States."

"Normally, elderly people account for the overwhelming number of influenza deaths. In 1918 that was reversed, with young adults killed in the highest numbers." 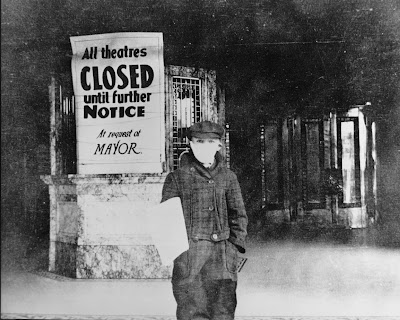 "Donald Trump’s grandfather Friedrich [born in the Kingdom of Bavaria] died from it in New York City. He was 49. His early death meant that his fortune passed to his son Fred, who used it to start a New York property empire."

"Even President Woodrow Wilson suffered from the flu in early 1919 while negotiating the crucial treaty of Versailles to end the World War."

"As to the original source of the pandemic, there are three chief candidates: Kansas poultry farms, the army barracks of Etaples in northern France, and the Shansi province in China." 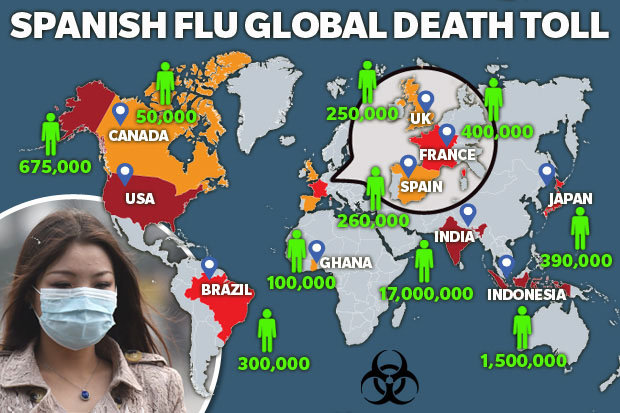 UPDATE: This site has stories of how assorted American cities battled the epidemic.
One Boston nurse remembered: "It seemed as if all the city was dying... In the homes serious illness, on the streets funeral processions."


"New York City responded to its earliest sign of infection with isolation and quarantine over a sustained period of time, beginning 13 days after the first case was detected, and had the lowest pandemic-related death rate of any city on the East coast. By contrast, Pittsburgh reacted late, waiting one month, and suffered the greatest number of excess deaths from the disease. In both cities, however, interventions were used singly rather than as a combined approach. St. Louis layered its interventions, using the various social-distancing measures at once, 2.5 weeks after its first case of infection; that tactic mitigated the outbreak and St. Louis fared better than 36 other communities as a result. Researchers compare layering interventions to layering Swiss cheese: if the holes are vulnerabilities, with enough layering you'll end up with a solid block of prevention."