In the last week several faithful Catholic women have come to me and said their hearts were breaking after hearing reports from the global Catholic TV network(EWTN) that Pope Francis was "abandoning Christians in China". One broke down in tears. She is prone to neither hysteria nor hyperbole.

Here is the Pope discussing China in his most extensive interview on China.  Here is the best explanation of the Pope's approach in an article by Francesco Sisci the Italian Sinologist who did the interview for Asia Times. A more thorough commentary is found in the works of  the Pope's nephew and fellow Jesuit,  Jose Luis Narvaja (a good English translation of his work is needed. It would also be helpful to see a profile of Fr. Jose to show that ancient practice of Papal nepotism can be a service to the Church. That sacralization of male kinship relations is not always an occasion for wealth transfer and graft. ) These excellent online commentaries don't make it in the conservative "Catholic news around the web" compilations. The righteous Western commentators have missed the much larger civilizational story about China and the Church that a multilingual writer like Sisci living in China seems to appreciate.

There is a blind spot among American free market capitalists against Pope Francis. They dominate the Catholic "conservative media". Their destructive anti-filial approach has given room to  the Catholic sexual left who take a different approach to the pontiff. The left selectively quotes Francis and then claim him as their own. (I believe this strategy will soon be abandoned as the Pope becomes clearer on the unacceptable nature of granting any social credence to homosexual relations.)

The Pope actually has a very sophisticated approach to diplomacy. He respects the existence of nations as a development of the polis and thus a social good in itself. He respects nations as corporate realities more than the ideas of leftist or conservative ideologies. Capitalism vs Communism is yesterday's knot. He sees China as a living civilization more than an ideology.  Like the rulers of China, he has seen the human catastrophe that follows the breakdown of constituted social order. When he visits heads of states, he does not preach about human rights. He does not play  "the nag" to posture as the prophet. His representatives emphasize to the Chinese that Pope Francis is Pope not of the West but the South. The new Pope represents Global Christianity not Western Civilization and he fully understands the crucial role of China in establishing a sensibility of harmony amidst the nations. 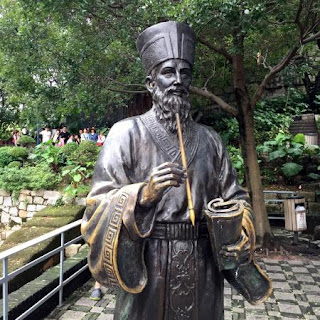 The unification of Korea, reconciliation with Russia, and avoiding the Thucydides trap of war with a rising China are all possible and desirable goals of Christian realists. The Pope is not an infallible guide for American national foreign policy in achieving these ends. He does not carry the responsibilities of the national sword. His Vatican policy however is much more profound than the protests of his American Catholic Republican critics.  He treats China as a legitimate social organism and a great civilization with its own spiritual heritage of harmony and order. He seeks Christian unity with Russia. He addresses nations as corporate wholes even if the Catholics are a small part of the population. This is a highly significant approach in asserting the fraternity which binds Catholics with other members of a common territory as fellow citizens. This is soothing music to civilizations that prize social order and the loyalty of all citizens.

When the Pope was a bishop in Argentina his fiercest critics were leftist intellectuals. Today his detractors in America are "conservative intellectuals". Their well-publicized filial disrespect has confused many faithful Catholics labeling Pope Francis as a "typical modern Jesuit." Nothing could be further from the truth. The Pope spends a good deal of his day in a regular habit of prayer. Always start there!! He believes in a personal Devil not a "symbol of evil." That puts him at odds with the superior general of the Jesuits. His approach to gender differences is that male and female beings  are a given in the created order which must be respected as part of ecological morality. His brilliant encyclical on ecology and the created order was dismissed and under-reported by the Catholic right because he nodded to the possibility of global warning.

Pope Francis  considers even the suggestion of female priests as a betrayal of both femininity and the priesthood. That doesn't exactly make him a James Martin Jesuit or even a Cardinal O'Malley type bishop.(O'Malley on NBC TV: "If I were founding church, I'd love to have women priests. But Christ founded it and what He has given us is something different.") The Pope is much clearer on the natural goodness of the sexual binary than almost all of his American or European fellow bishops.
The Pope believes that politics is the noble science of constituting and maintaining the social order of the polis -the unity of social organization. His understanding is much different than right and left bishops lobbying on "their issues." The Pope calls the gender ideology of the rich countries an attempt at "ideological colonization." We doubt Mr. Arroyo and his papal lynch mob at EWTN will begin any stories on the Holy Father with that headline.

The nations and major religions are experiencing a post Cold War paradigm shift. The Pope is playing his part -- and playing it quite well. The Christian nations have our part to play as well. It is very different than the Pope's and involves the defense of borders and at times the threat and use of military force. The Christian nations must guard from the global capitalism of the right and the sexual anarchy of the left. We must also reject the atheistic tradition of Social Darwinism organizing regional military  coalitions of smaller nations against the largest nation in each region. That strategy of perpetual war is not the Providential destiny of the nations and should not be the policy of a Christian nation. We will not understand our role as a Christian nation until we see how the movement of Global Christianity has outgrown the categories of the West and the Cold War. Christians and nationalists from Eastern Europe, France, Russia, South Korea, and America can offer  humanity a new sense of direction, purpose and order after the bloody twentieth century. Such a perspective of global Christianity and strong national identities can emerge.
The great gift of Mother Angelica's TV outreach is being squandered by her male heirs. Let us pray that this Lent there might be a renewed sense of  piety from the arrogant commentators from the North toward the Pope from the Global South. Filial piety will provide a much clearer vision of the truth than prejudging our father's every move through the clouded lens of the defunct alliances of the Cold War. And it will leave the hearts of some very fine Catholic women a good deal less troubled. 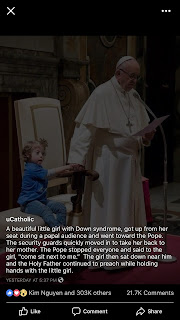 AOA  on an ecclesial approach  to our elder brother in China.  Christianity and China  have an ancient and bloody history that must be understood in terms of the unfolding drama and spiritual destiny of the human species and its largest nation.
AOA  on American foreign policy getting beyond the Cold War and respecting China as our WWII ally and a great civilization. Christian Realism and a new paradigm for China.

Paul Kengor for the opposition. Professor Kengor thinks the Pope Francis China policy a capitulation. He is an honest historian and has never been reflexively anti Francis. His argument should be heard.

A very good background on the Patriotic and "underground" Church in China  by Phil Lawler at Catholic Culture.
AOA on Understanding Pope Francis by listening to him.

Finally Robert Moynihan on the Pope and His China Dream  ...an insightful Vatican correspondent recounts an experience in Rome:


"A few months ago, I was standing by La Vittoria restaurant on the via delle Fornaci in Rome following a dinner with friends. It was a quiet, warm summer evening, about 10 p.m., already dark. An Italian man whom I knew came walking briskly down the street. He is an internationally respected writer on geopolitical affairs. I stopped him, greeted him, and asked him what he was working on at the moment. "China!" he said. His hair was disheveled and standing almost on end in different places.

"China?" I said. "Yes! The Pope and his advisors would like to make a breakthrough in China! It's their #1 priority. Nothing else is even remotely as important to them." "Ah!" I replied, mentally rifling though a series of other matters of concern in mid-2017: the Church's liturgy, the dubia... the bloody conflicts in Libya and Syria and the consequent massive immigration into Europe... the Vatican's opaque finances... the tragic conflict in Ukraine... the post-Christian West's seemingly Gnostic longing for, and embrace of, what will transcend man and perhaps dominate man, the "transhuman," the "superhuman"... "Ok," I said. "Interesting. So, what is the vision?"

"Simple!" my friend replied. "The people of China, so hard-working, so oriented toward becoming successful, in their hundreds of millions, are nevertheless, of course, souls, souls with a hunger for the divine, for the eternal, for God..." He stopped and pointed toward the Apostolic Palace in the distance, above the colonnade. "And that is something about which the Church..." (he shook his finger at the Vatican palaces) "knows very much, for two millennia now. And the Chinese government, despite its best efforts, does not, and cannot, fully understand this hunger. "And so we have these two great powers, one secular, one spiritual. And the Pope is persuaded that if the Chinese government gives the Church an opening to function in China, something extraordinary will happen." "Like what?" I asked.

"Mass conversions," the excited writer said to me. "By the millions. When the Church presents Jesus Christ to the Chinese people, when the sacraments are celebrated in churches in every part of the country, the people will respond because they are spiritually thirsty, spiritually starving. What the Church offers has been systematically excluded from every aspect of Chinese life, which was traditionally rooted in a reverent Confucianism, which respected elders and nature's laws. All that was uprooted in the Cultural Revolution of the 1960s. But the desire for something more remains, for it is a human desire, intrinsic to our nature. And for this reason, the Pope thinks the Chinese people will be fascinated by the Church and the Christian message, and ultimately, by Jesus Christ. And he believes there may well be, if there is an opening, perhaps 100 million Catholics in China in 10 years, perhaps 200 million in 20 years. Making China the largest Catholic country by number of believers in the world. And that would have extraordinary consequences."

"But the Chinese government..." I said. "Would the government ever allow such a thing?" "Good question," he said. "No one knows the answer. But the bet is that the situation will become uncontrollable. The longing for the faith, for the transcendent, will become a cultural phenomenon, an explosion of spiritual force. And the government will be unable to take repressive measures because the longing will be too widespread, and open repression too negative for the country's global image. So the conversions will come, and they will be massive." And he summed up: "But one thing is quite clear: this Pope is the first 'post-Western' Pope. He sees far beyond the old boundaries of what we called Christendom." We talked a while longer, and then parted. But I did not forget the conversation.


ADDENDUM SEPT 22, 2018  A Vatican-China Accord has been struck.
Posted by anthropology of accord at 9:00 PM