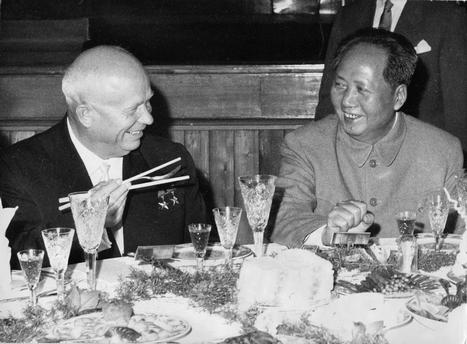 From Frank Dikotter's The Tragedy of Liberation: A History of the Chinese Revolution:

"A turning point in the communist world came in the morning of 25 February 1956. On the final day of the Twentieth Congress, as foreign delegates were busy packing their bags, Nikita Khrushchev assembled the Soviet representatives for an unscheduled secret session in the Great Kremlin Palace, the Moscow residence of the Russian tsars. In a four-hour speech delivered without interruption, Khrushchev denounced the regime of suspicion, fear and terror created by Stalin. Launching a devastating attack on his former master, he accused him of being personally responsible for brutal purges, mass deportations, executions without trial and the torture of innocent party loyalists. Khrushchev further assailed Stalin for his 'mania for greatness' and the cult of personality he had fostered during his reign. Members of the audience listened in stunned silence. There was no applause at the end, as many of the delegates left in a state of shock...

"Copies of the speech were sent to foreign communist parties. It set off a chain reaction. In Beijing the Chairman was forced on to the defensive. Mao was China's Stalin, the great leader of the People's Republic. The secret speech could only raise questions about his own leadership, in particular the adulation surrounding him. DeStalinisation was nothing short of a challenge to Mao's own authority...

"Khrushchev also accused Stalin of ruining agriculture in the 1930s, even though he 'never went anywhere, never met with workers and collective farmers' and knew the country only from 'films that dressed up and prettified the situation in the countryside.' This, too, must have been too close to the bone for a Chairman who viewed the country from the comfort of his private train, passing through stations emptied of all but security personnel."


UPDATE: What happened to Comrade Nikita after he was forced to step down as top leader in October 1964? He basically spent the remainder of his days under house arrest, a broken and dispirited man.

Khrushchev suffered a heart attack on September 11th, 1971. The announcement in Pravda of his death consisted of a single line.

To put some perspective on Communist atrocities, let's compare a few numbers:

During the last phase of Mao's career -- the bloody lunacy of the Cultural Revolution [1966-1976] -- there was no shortage of Western intellectuals who viewed it as a hopeful model for all mankind:


"For a few brief years during the 1970s, advocates of the type of Marxism-Leninism promoted by the Chinese Communist Party constituted the largest and most dynamic trend on the U.S. socialist left. This self-described 'New Communist Movement' (the term 'Maoism' was then frowned upon) was overwhelmingly a creation of young people radicalized in the tumultuous 1960s. At its height, U.S. Maoism could claim a core of roughly 10,000 activists...

"U.S. partisans of 'Mao Tse Tung Thought' were never able to unite into a single Maoist party. But the largest radical newspaper of the time, the 20,000-plus circulation Guardian, was a proponent of New Communist goals from 1971 to the end of the decade."