Stratfor - short for Strategic Forecasting, Inc. - is a private global intelligence company that offers geopolitical insight into the interplay of nations. Stratfor has developed an excellent series of short (~2-4 minute) videos which provide the viewer with a specific nation, along with its basic history, geography, culture, and geopolitical allies and adversaries. In the following video, they present the geographic challenges facing Saudi Arabia.


A SHORT PROFILE OF SAUDI ARABIA
by David Pence and A. Joseph Lynch 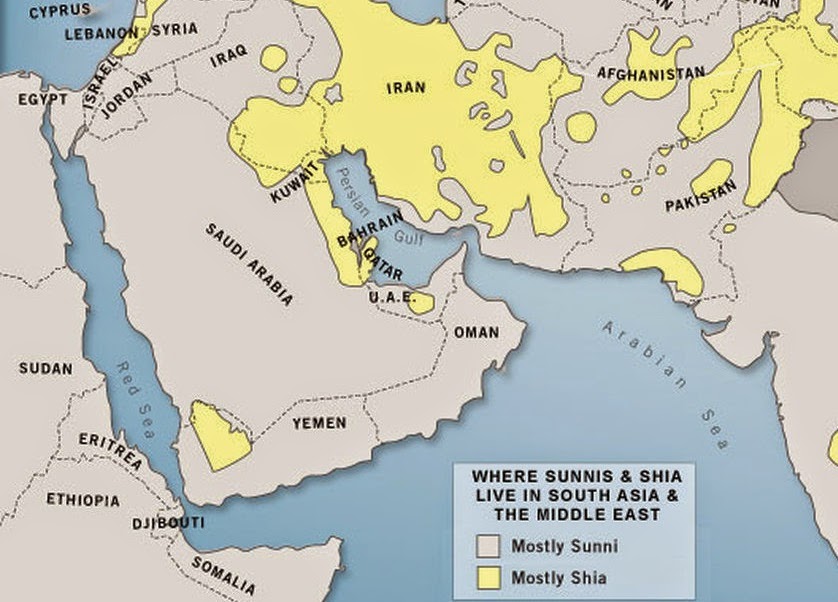 Saudi Arabia has a population of 30 million, with 8 to 9 million foreigners. Almost all the physical labor and service work in the kingdom is done by the foreigners. Most are from Muslim countries but there are over a million from the Philippines. Christians are not allowed to worship. Saudi Arabia has the fourth largest military budget in the world after the US, China, and Russia. They have the most oil reserves in the world and are the top oil producer. Over 15% of Saudis are Shiites, but they are clustered in the oil-rich Eastern Province where the Shiites are an oppressed majority (see map at right). Over 50% of Saudi oil is in the Eastern province with its Shiite majority and 20-30% foreign worker population. There is a Pakistani taxi-driver joke that the best proof that Islam is the true religion is that God gave it to the Arabs, and yet it is still here after all their years of misrule.

Here is how the Saudi Embassy describes the three historical Saudi States:


In the early 18th century, a Muslim scholar and reformer named Shaikh Muhammad bin Abdul Wahhab (1702-1792) began advocating a return to the original form of Islam. Abdul Wahhab was initially persecuted by local religious scholars and leaders who viewed his teachings as a threat to their power bases. He sought protection in the town of Diriyah, which was ruled by Muhammad bin Saud.

Muhammad bin Abdul Wahhab and Muhammad bin Saud formed an agreement to dedicate themselves to restoring the pure teachings of Islam to the Muslim community. In that spirit, bin Saud established the First Saudi State, which prospered under the spiritual guidance of bin Abdul Wahhab, known simply as the "Shaikh." By 1788, the Saudi State ruled over the entire central plateau known as the "Najd." That State was displaced by the Ottoman Empire in 1818.

By 1824, the Al-Saud family had regained political control of central Arabia. The Saudi ruler Turki bin Abdullah Al-Saud transferred his capital to Riyadh, some 20 miles south of Diriyah, and established the Second Saudi State. Ottoman armies again forced them out in 1891.

Al-Saud sought refuge with the Bedouin tribes in the vast sand desert of eastern Arabia known as the Rub’ Al-Khali, or ‘Empty Quarter.’ From there, Abdulrahman and his family traveled to Kuwait, where they stayed until 1902. With him was his young son Abdulaziz, who was already making his mark as a natural leader and a fierce warrior for the cause of Islam.

The Modern Kingdom of Saudi Arabia

The young Abdulaziz was determined to regain his patrimony from the Al-Rashid family, which had taken over Riyadh and established a governor and garrison there. In 1902, Abdulaziz – accompanied by only 40 followers – staged a daring night march into Riyadh to retake the city garrison, known as the Masmak Fortress. This legendary event marks the beginning of the formation of the modern Saudi state. After establishing Riyadh as his headquarters, Abdulaziz captured all of the Hijaz, including Makkah and Madinah, in 1924 to 1925. In the process, he united warring tribes into one nation. On September 23, 1932, the country was named the Kingdom of Saudi Arabia, an Islamic state with Arabic as its national language and the Holy Qur’an as its constitution.

Abdulaziz is the father of all the subsequent kings of Saudi Arabia, including present-day King Salman and the Crown Prince Muqrin.

Oil was discovered on the Shiite majority island of Bahrain in 1932, but Standard Oil of California hit the motherload in 1938 just across the Persian Gulf in the Shiite eastern province of Saudi Arabia near the village of Dammam. Over the years the Sauds allied with SOCAL and then  eventually took over all the oil revenues. By 1988 Saudi Aramco completely controlled the country's resources. The Saudis have utilized their dominance in the market to boycott the US, Japan, Britain, and Canada after the 1972 Arab-Israeli Yom Kippur War, causing the energy crisis of 1973. The Saudis can also glut the market to punish their oil-producing enemies (Russia, Iran, and American fracking companies) as we see today in the precipitous 2015 oil price drops.

The enormous oil wealth of the Saudis, their original bargain with the most intolerant of all Sunni religious traditions, and their admirable ability to negotiate betwixt allies and enemies -- all combine to place them at the center of the religious and national confusion in the Mideast. As one example of sorting out the confusion, two important events happened in November 1979. The Iranian Shiites began to hold US hostages in our embassy, and the mosque in Mecca was seized by Sunni Salafists.

In response to the mosque seizure, the control of daily cultural life by the Wahhabi clerics tightened throughout the nation. The long memory of the Iranian hostage crisis and the amnesia of the much more consequential Mecca event is a prime example of the Sunni-Shia confusion which has so perplexed American policymakers in the Mideast. Finally, policymakers who take Islam seriously as a religion must not forget that there is another claimant to the holy places in the Sunni world. The Hashemite story of the 1924 Saudi seizure of the Hajiz (the area of Mecca and Medina) is a different narrative than told on the Saudi embassy web page.

For the Jordanians, the story of the holy cities of Islam is not a triumphant  tale of the Saudi-Wahhabi concord. The emir of Mecca from 1908 to 1917 was Hussein bin Ali. The Young Turk revolution in 1908 set an increasingly nationalistic and secular movement against the Arab-friendly Islamic arrangements of the Ottoman empire. Hussein did not think of himself as an Arab nationalist, but he found the young Turkish nationalists to be the enemy of his Arab kinsmen and their religion. Hussein sided with the British against the Ottomans (who sided with the Germans and Austrians in World War I). After leading the great Arab revolt against the Ottomans, the Hashemite clan would be betrayed by the British in Iraq and Syria -- and usurped in the holy cities by the Sauds. The Hashemite Kingdom of Jordan is a very different Sunni civilization than their Saudi neighbors. They, too, have been longtime allies of the United States and represent an alternative approach to how Islam and the nations shall be configured.

Saudi Arabia is more than the Saudi clan and the Wahhabi clerics. It is Shiites in oil-rich provinces, as well as foreign workers who do the work but can neither worship nor speak freely. It is other Sunnis with different ideas of an Arab nation or Islamic caliphate. Those Sunnis love God and the Islamic ummah, but they may not feel the same about the House of Saud.

See January 31st's Religion and Geopolitics Review for many articles examining Saudi Arabia, as well as our book review on the Kingdom.