Friday BookReview: BRIDESHEAD REVISITED -- "I can't shut myself out from His mercy"


(There are thousands of Christians who love Mr. Waugh's 1945 novel about an upper-class Catholic family in 1930s England; but also a great number who find it both perplexing and detestable. If you're one of the latter, call a ten-minute truce and ponder some of the following insights of Charles Hallett, who taught English at Fordham for many years.

Charles, a non-Catholic, is both repulsed and attracted by the mysterious force that unites and directs the seemingly disparate members of the Flyte family...

Almost as soon as he becomes the chum of Sebastian Flyte, Charles makes us feel his repulsion for the Flyte family religion and for its chief representative, Sebastian's mother, Lady Marchmain, whose attempts to bring stability to Sebastian's life are viewed as the insidious cause of the decline she wishes to prevent. I have always suspected Waugh of laying a trap for the unsuspecting reader, in that he so deliberately makes us identify with Sebastian and Charles, those free spirits who find Oxford constraining, that we adopt Charles' view of Lady Marchmain. Not until late in the novel do we realize that Waugh continually likens this remarkable lady to the Dolorosa (Our Lady of Sorrows).


The mystery that Waugh is rendering is best approached through a survey of the members of the Marchmain family. At one extreme stand three who remain staunchly Catholic. Lady Marchmain's oldest son, Bridey, "massive" in his "rectitude," embodies the "legalistic" side of the Church. Bridey knows all its regulations and never deviates from any. His strict adherence to Catholic precepts, especially at moments of crisis in the family (marriages, say, or deaths) causes spiritual explosions. Waugh uses "Bridey's bombshells" to keep bringing reality into his sister Julia's life and to precipitate the dramatic climax of the novel.

Lady Marchmain is Waugh's tribute to the old Catholic families, England's Recusants. She is charitable, believing that "it is one of the special achievements of Grace to sanctify the whole of life, riches included." Lady Marchmain lives for others, unobtrusively, selfless but not a saint, enduring with fortitude an inner suffering undetected by all but her daughter Cordelia. Chief among her sorrows are the defection of her husband, Lord Marchmain, the miseries her children bring upon themselves by their willfulness, their abandonment of the Faith, and consequentially a "deadly sickness in her body." Waugh associates Lady Marchmain closely with her chapel, which houses the Eucharist. When she died, Cordelia tells us, "the priest came in... blew out the lamp in the sanctuary and left the tabernacle open and empty." Suddenly, "there wasn't any chapel any more, just an oddly decorated room."

Cordelia, the youngest child, more overtly a touchstone, presents the Faith from the wholesome viewpoints of wisdom and humor. She can baffle both catechumen and priest by mischievously representing common superstitions as articles of the Creed, but lives the Faith selflessly. In Cordelia's confidences to Charles, we hear Waugh's own voice.

At the other extreme are Julia's two lovers. In Julia's husband Rex Mottram, Waugh draws a fascinating portrait of the hollow man: handsome, rich, powerful, and absolutely amoral. Rex "needs setting up solidly" and finds Julia, London's top debutante, "a suitable prize." He is all for a Catholic wedding, because "that's one thing your Church can do... put on a good show," but prefers to waive the instruction. The Jesuit charged with acquainting Rex with Catholic precepts finds that Rex "doesn't seem to have the least intellectual curiosity or natural piety," and Julia learns, over time, that Rex "isn't a real person at all; he's just a few faculties of a man highly developed." She sums him up as "something in a bottle, an organ kept alive in a laboratory, a tiny bit of a man pretending he was whole."

Charles, the narrator of the story and the proposed second husband of Julia (he and Julia have been living together at Brideshead and at a certain point she decides that they must marry, for she "wants to be made an honest woman"), has greater potential than Rex. Both men are worldly, but Charles's worldliness is civilized... Charles, too, even after his travels to the New World, even after the growth of his love for Julia, is "still a small part of myself pretending to be whole." But unlike Rex, Charles knows it, though he doesn't know yet what he learns later, that a man can be complete only if God resides in him.

In between these two extremes wander the apostates -- Lord Marchmain, Sebastian, and Julia -- those members of the Flyte family who flee from God.

Lord Marchmain embraces Catholicism in the initial stages of his love for Lady Marchmain and says when they are married, "You have brought back my family to the faith of their ancestors," but soon finds the bonds of marriage confining. He flees to Italy, where he sets up with a mistress. His chief characteristic is to hate his wife, and one of the main activating forces in his life is to authorize any action on his children's part that will give her suffering.

In Sebastian, their younger son, a homosexual, Waugh paints a consummate portrait of an [alcoholic]. Seeking to be "free," Sebastian flees all civilizing and restraining forces -- not only the dons at Oxford, Monsignor Bell the bishop, and his mother, but "his own conscience and all claims of human affection" as well. He drinks at first, like Charles, from the pure joy of overflowing spirits, but later to escape from reality. A true Flyte, Sebastian spends most of the novel "running away as far and as fast as I can," to Italy, Constantinople, Tangier, and is finally "found starving and taken in at a monastery near Carthage."

Julia too turns her back on the family religion and embraces instead the magnetic Rex Mottram. When that marriage fails, she [eventually crosses paths with Charles, and he] moves in with Julia at Brideshead, an arrangement that Rex finds utterly convenient.

It is through Cordelia that Waugh introduces the final chapters of the novel that show the mysterious power of the Faith to reclaim those who have been shaped by it. Speaking to Charles at the end of Part I, Cordelia observes that

the family haven't been very constant, have they? There is Papa gone and Sebastian gone and Julia gone. But God won't let them go for long, you know. I wonder if you remember the story Mummy read us the evening Sebastian first got drunk... Father Brown said something like "I caught him... with an unseen hook and an invisible line which is long enough to let him wander to the ends of the world and still bring him back with a twitch upon the thread."

And later she reveals to Charles that Sebastian has gone back to the Church. The suffering that Sebastian undergoes, "maimed as he is" by drink -- "no dignity, no power of will," Cordelia declares -- acts as a purgation, making him holy. Sebastian becomes an under-porter at the monastery, "a great favourite with the old fathers," whom he serves, and in his humility he is "very near and dear to God." Waugh portrays the reeling in of Julia and Lord Marchmain in fuller detail.

Bridey's bombshells play a key role in awakening the conscience of Julia. The first of them occurs when he announces his engagement to Beryl, then states that because "Beryl is a woman of strict Catholic principle" he couldn't possibly bring her to Brideshead, where Julia is "living in sin with Rex or Charles or both." Bridey's frank observation sparks in Julia a deep realization of the meaning of her actions, an awareness that she has been "living in sin, with sin, by sin, for sin, every hour, every day, year in, year out"; that Christ bore her sin too, "hanging at noon, high among the crowds and the soldiers." Julia believes at this point that though "I've gone too far [from God and] there's no turning back now," yet she can still "put my life in some sort of order in a human way" by marrying Charles. And thus does Julia feel the twitch on the thread.

Bridey's next bombshell explodes after Lord Marchmain, driven out of Italy by impending war and a serious heart problem, comes back to Brideshead to die. Bridey announces that "Papa must see a priest," a proposal that brings into focus the spiritual gulf that separates Charles from Julia. Julia leans toward the family's point of view: What is at stake here is the salvation of a soul. Lord Marchmain has not been a practicing member of the Church for 25 years and must before his death be reconciled to God. Charles staunchly opposes summoning a priest, on the grounds (ironically) that Lord Marchmain should be allowed "to die in peace." In Charles's view, the Church will "come now, when his mind's wandering and hasn't the strength to resist, and claim him as a death-bed penitent"; it's all "superstition and trickery"...

Waugh makes it a crucial question of his denouement how Lord Marchmain will respond to the ministrations of Father Mackay. Then he gives an apparent victory to Charles. When Lord Marchmain sees the priest and sternly orders Bridey to "show Father Mackay the way out," Charles feels jubilant: "I had been right, everybody else had been wrong," he exults. But Waugh's plot does not end here. As Lord Marchmain's condition worsens, Julia brings the priest back. Her father seems "nearer to death than life" as Father Mackay begins to administer the sacrament of absolution. Then suddenly there is a change, first in Charles and then in Lord Marchmain -- Charles "knelt, too, and prayed: 'O God, if there is a God, forgive him his sins, if there is such a thing as sin,' and the man on the bed opened his eyes." At that moment Charles feels an intense longing for a sign. Then Lord Marchmain moves his hand to his forehead, to his breast, to his shoulder, and makes the sign of the cross.

Lord Marchmain's deathbed conversion effects Julia's. At the novel's end, Julia faces the inevitable truth -- that a marriage to Charles, legally achievable by his divorce... and hers from Rex, would be no marriage in the eyes of God. It is not this marriage that will "make her an honest woman" but fidelity to the commandment, Thou shalt not commit adultery. Julia knows, finally, that "the worse I am, the more I need God. I can't shut myself out from His mercy." And Charles sees the truth of her choice...

When we last meet Charles, years later, as he revisits the Brideshead estate which has called forth these memories that make up the novel's story, we find that Charles now shares the Marchmain's respect for the Holy Eucharist. He goes straight to Lady Marchmain's chapel, where he discovers "a small red flame -- a beaten-copper lamp of deplorable design, relit before the beaten-copper doors of a tabernacle... burning anew among the old stones," and before the tabernacle he prays. Such are the ways of Grace. 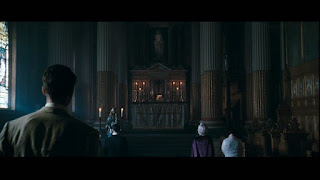