(Graham Greene, who died in 1991, was one of the most widely read writers of his century.
Here is a review by Nick Ripatrazone that appeared a couple weeks ago.)


In the world of Graham Greene’s 1940 novel, The Power and the Glory, it’s a bad time to be a Catholic. The book’s hero is an unnamed priest on the run from Mexican authorities after a state governor has ordered the military to dismantle all vestiges of the religion. Churches are burned. Relics, medals, and crosses are banned. The price for disobedience is death. While many clerics give up their beliefs and accept their government pensions, the unnamed priest travels in secret, celebrating Mass and hearing confessions under the cover of night. Yet he’s also a gluttonous, stubborn, and angry man drowning in vices, and the religious ambition of his earlier years has been replaced with a constant desire to drink, hence Greene’s term for him: the “whiskey priest.” Tired of risking his life, the priest even prays to be caught. 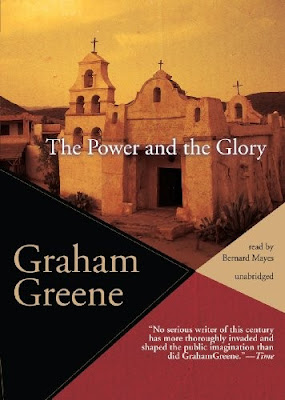 A violent, raw novel about suffering, strained faith, and ultimate redemption, The Power and the Glory received literary acclaim—but not without catching the attention of Catholic censors, who called the book “sad” and denounced its “immoral” protagonist. Despite—or even because of—this vexed history, Greene’s novel is the perfect book to read during the season of Lent... Stereotypically a time for modern Christians to abstain from Facebook or chocolate or alcohol, Lent is the most dramatic time of the liturgical year—40 days of prayer, fasting, and cleaning one’s spiritual house, in hopes that honesty might lead to penance and good deeds. One vision of Lent emphasizes transcendence over struggle: the American Catholic writer Thomas Merton called it “not a season of punishment so much as one of healing.” But Greene’s dark novel and its deeply flawed protagonist offer a richer way to think of faith and self-reflection—one that average Christians might find more accessible and realistic than romantic narratives about belief.

In life and in fiction, Greene was more interested in sinners than saints, and the whiskey priest is no saint—at least not for most of the story. If anything, he’s closer to the modern conception of the antihero. His pride swells his sense of importance. In one village, where the faithful fear retribution from the military officers, the priest hesitates to leave: “Wasn’t it his duty to stay, even if they despised him, even if they were murdered for his sake, even if they were corrupted by his example?” Later, he’s selfish, crude, and heretical in one stroke: He eats a sugar cube that he discovered by a dead child’s mouth, rationalizing “If God chose to give back life, couldn’t He give food as well?” In these and countless other examples, Greene shows how easily dogma can disappear in the face of desperation.

But beneath the darkness of the priest’s actions is faith, which he bears witness to in two pivotal scenes. Arrested for possessing outlawed alcohol, he’s thrown into a small jail cell with a “pious woman,” who later notices a couple having sex in the corner. “The brutes, the animals!” she exclaims. And yet the priest counsels the woman to not think that their action is ugly, “Because suddenly we discover that our sins have so much beauty.” In lines that reflect the lived truth of Lenten struggle, the priest explains, “Saints talk about the beauty of suffering. Well, we are not saints, you and I. Suffering to us is just ugly. Stench and crowding and pain. That is beautiful in that corner—to them.” Greene’s aversion to sentimentality makes for palpable theology. He finds God in dirt and in blood—in the Christian struggle to make faith matter in life.

Ironically, the pious woman is herself the antithesis of Lenten reflection. The priest asks her to pray for him, but she responds, “The sooner you are dead the better.” He thinks about how he can’t see her face in the dark, and uses that blindness as a metaphor for judgment and misunderstanding: “When you saw the lines at the corners of the eyes, the shape of the mouth, how the hair grew, it was impossible to hate. Hate was just a failure of imagination.”

Nevertheless, after publication not everyone was convinced of [the novel's] spiritual value, least of all some members of the Vatican, which had been alerted to its questionable content. Greene’s literary celebrity at the time caused some high-level Catholic officials to fear how influential his novel’s depiction of Catholicism would be. One of the consultants appointed to assess the novel concluded that “literature of this kind does harm to the cause of the true religion”...

A self-described “Catholic agnostic,” Greene had believed in “nothing supernatural” until his future wife pointed out his misunderstanding of the Virgin Mary in one of his film reviews. “I was interested that anyone took these subtle distinctions of an unbelievable theology seriously,” he said. After their engagement, he concluded “that if I were to marry a Catholic I ought at least to learn the nature and limits of the beliefs she held ... Besides, I thought, it would kill the time.” Greene “fought and fought hard” against belief on the “ground of a dogmatic atheism,” comparing his struggle to a “fight for personal survival.” In 1926, there was no grand epiphany, but a quiet shift: Greene took the baptismal name of St. Thomas the doubter.


So why does [an old] novel about a sinful, alcoholic priest get my vote for the perfect book to read for Lent? Whereas a more optimistic believer might have written a devotional novel, Greene’s novel feels informed by the messy reality of lived belief. (He wrote it after traveling to Tabasco, Mexico, and learning about the brutal anti-Catholic laws imposed by its governor, Tomás Garrido Canabal.) Not despite but because of his sins, the whiskey priest is the prototypical Lenten character. ​Much like how Lenten resolutions—no chocolate! no TV!—are strained with each passing day of the season, the priest expects some degree of failure. But this doesn’t weaken him spiritually.

Dramatizing the Lenten struggle between doubt and faith, complacency and reflection, Greene’s novel examines what happens when an unfit believer is made responsible for the well-being of an entire community. Because the government has destroyed the physical artifacts of Catholicism, the priest must turn inward and confront his own doubts, and as the only remaining face of the church, he’s forced to air his private demons. But rather than reveling in these sins, the priest is crushed by their significance and seeks to replace greed with grace. “It was too easy to die for what was good or beautiful,” the priest reflects, before the novel’s tragic end. The world “needed a God to die for the half-hearted and the corrupt.” It’s the novel’s empathy for “the half-hearted and the corrupt”—and its recognition that even those people are worthy of salvation—that makes the story an unlikely but ideal one to revisit in the weeks before Easter.