The Physical Ecology, Communal Loyalties, and Geopolitics of Southeast Asia 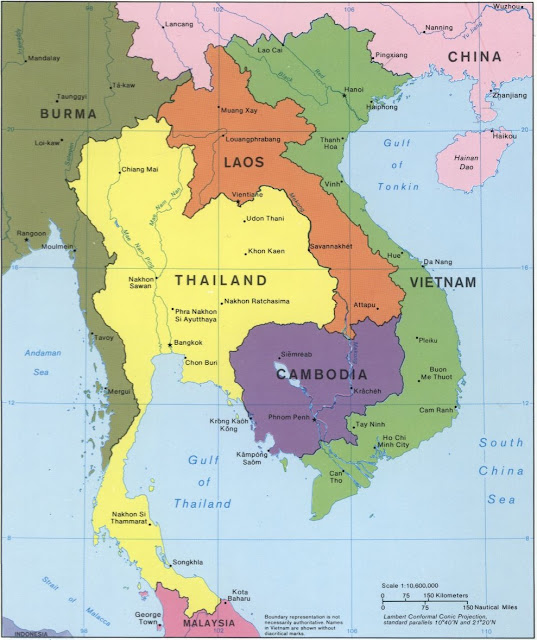 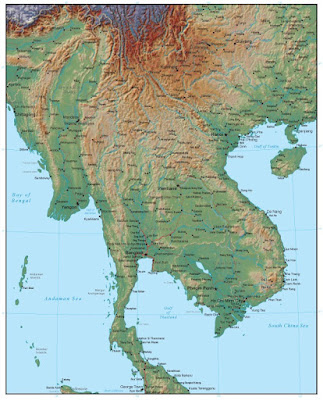 Mainland southeast Asia forms a long, north-south peninsula bordered by (from northeast to northwest) the Gulf of Tonkin, the South China Sea, the Gulf of Thailand, the Strait of Malacca, the Andaman Sea, and the Bay of Bengal. Within the boundaries of these waters may be found the five nations of this regional post: Vietnam,(92mill) Cambodia(15mill), Laos(7mill), Thailand,(68mill) and Myanmar (or Burma)(52mill). At roughly the size of Texas, Myanmar is by far the largest nation in the region. The rest, compared to US states, fall into the following order: Thailand (larger than California), Vietnam (New Mexico), Laos (Minnesota), and Cambodia (North Dakota).

The physical geography of the region is marked by a mountainous north, with ranges extending southwards along Vietnam's border with Laos and Cambodia, and down the Kra Isthmus dividing Myanmar and Thailand. The region's lowlands are generally minimal, with Vietnam's low-lying coastal plains wedged in between the mountains and the sea. Myanmar's central valley region extends southward toward the Andaman Sea with mountain chains running along its east and west. Cambodia and south-central Thailand (the "rice bowl of Asia"), however, enjoy the benefits of the Mekong and Chao Phraya river systems and the low-lying areas for agriculture. 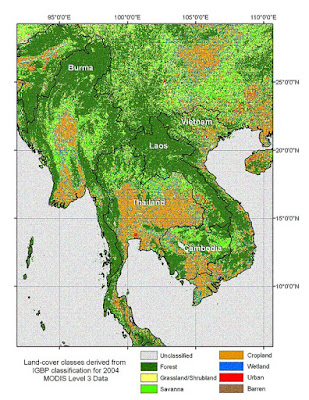 The region's climate is dominated by a monsoon cycle of wet, humid, hot summers and dry winters. Natural resources vary from nation to nation, with Thailand rich in tin, rubber, natural gas, tungsten, tantalum, timber, lead, fish, gypsum, lignite, fluorite, and arable land; while Laos is relatively poor in resources beyond its dense forests, and some deposits of gypsum, tin, and gold. Vietnam's access to the South China Sea makes it a regional competitor for natural energy resources like gas and oil, but it is also rich in coal, iron ore, and copper. Cambodia's limited natural resources include its forests, energy resources in the Gulf of Thailand, along with some moderate amounts of mineral resources. Myanmar is a mineral-rich nation with an estimated ten trillion cubic feet of natural gas off its coast - but its state of extreme low development often leaves its resources untapped.

With the exception of Myanmar's 135 distinct ethnic groups, the region's nations are each relatively uniform in ethnicity. Roughly 96% of Thailand's inhabitants are ethnic Thais, while 90% of Cambodians are of Khmer descent. About 86% of Vietnamese are of the Viet ethnicity and 60% of the population of Laos are ethnic Laos. Myanmar, despite its vast ethnic diversity, remains 68% ethnic Bamar and 10% Shan (both peoples originate in south China's Yunnan region). Myanmar has seen years of internal conflict with the ill-treated Shan.  Myanmar does not recognize the Muslim Rohingya ethnic group from the state of Rakhine as indigenous natives deserving citizenship.  (See Buddhists expel "historical Muslim invaders" from AOA  and Burma profile Map on Monday of AOA)

The region's majority languages are formed by the Austro-Asiatic Languages ("austro" meaning "south") spoken in Vietnam (i.e. Vietnamese) and Cambodia (i.e. Khmer) and the Tai-Kadai Languages of Laos (i.e. Lao), Thailand (i.e. Thai), and part of Myanmar (i.e. Shan). Myanmar is also home to the Burmese language related to the broader Sino-Tibetan family of languages. The colonial history of Britain and France has also left a lasting French and English presence in the region. Beyond these languages, however, is a host of diverse languages rooted in the region's small ethnic groups.

Almost half of Vietnamese practice "folk religions" while decades of Communist rule have left roughly 30% practicing no religion.There are 6million Catholics and 12 million Buddhists. 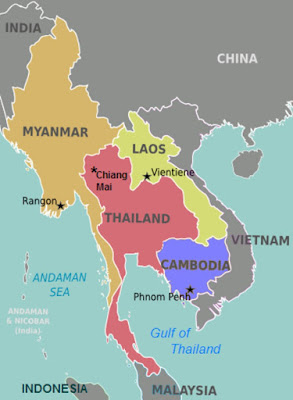 Bordering the nations of this regional post are other important actors in the broader southeast Asia: Malaysia (and Singapore), Indonesia, Philippines, Bangladesh, India, and China.We will look at the geopolitics and military history  of each country in future individual postings. AOA on President Diem and the Vietnam War.

See also the video from Geography Now! on Cambodia.

This post originally appeared on Anthropology of Accord on November 16, 2015
Posted by A. Joseph Lynch at 6:00 AM