Christian Realism: The Clash of Civilizations and the Remaking of World Order

Samuel Huntington (1927-2008) was a Harvard professor in International Studies and a member of the National Security Council in the Carter administration. He taught such important foreign policy thinkers as John Mearsheimer, Frances Fukuyama, and Fareed Zakaria. In 1993 he wrote an article in Foreign Affairs magazine arguing that the "central and most dangerous dimension of emerging global politics would be conflicts along civilizational fault lines." The article became a 1996 book called The Clash of Civilizations and the Remaking of World Order.

He argued that the three blocs of the Cold War (US and allies, Communist USSR/China and allies, and a third group of nonaligned nations) would give way to a new multipolar multi-civilizational order. "In the new world order, the most important conflicts will not be between social classes but between peoples of different cultural entities. In this new world, local politics is the politics of ethnicity and global politics is the politics of civilization. The rivalry of superpowers is replaced by the clash of civilizations. The bloody clashes of clans in Somalia or tribes in Rwanda pose no threat to spread farther. But conflicts along civilizational fault lines can become bigger wars... The most important countries of the world belong to different civilizations. Patterns of political and economic development differ from civilization to civilization. Power is shifting from a dominant West to a still predominant West but emerging civilizations with their core states challenging the hegemony of the West." 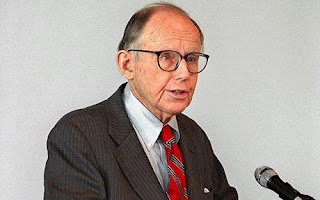 In his chapter on the nature of civilizations he defined blood, language, religion, and way of life as key elements. "But of all the objective elements that define civilizations, however, the most important usually is religion." In his subsequent book on American identity, Who Are We?, he would identify the core American identity as Protestant, Anglo-Saxon, and English speaking.

Huntington explained that his civilizational model is a Map -- a paradigm.  A paradigm is an explanatory conceptual map that provides a pattern of interpretation and prediction. He borrows the notion from Thomas Kuhn’s classic The Structure of Scientific Revolutions. The Huntington paradigm was given added credence as an explanatory model with the fight of the West against Orthodox Serbia, the massing of an expanded NATO against Russia, and the Islamic jihad from 9/11 to the Orlando massacre.

Huntington questions some of his own classifications like Africa and Latin America as separate civilizations. He countered his own civilizational paradigm with three other conceptual maps: 1) Us against Them; 2) One-world harmony; 3) 190 nation states -- more or less; and 4) sheer chaos. He defended his use of the West by showing (p. 55) how the term "free world" is declining, and the West is being used more in citations of the New York Times, and the Washington Post. In the Congressional Record he shows a great decline of references to "the free world," but not a corresponding adaptation of "the West."

Civilizations often coalesce around some dominant core state. Core states of the different civilizations will replace the superpowers, he says. He discusses France and Germany as a European core, as well as the US as the West’s core. He shows that the old line drawn to define the Iron Curtain has moved several hundred miles east to demarcate Orthodoxy from western Christianity. He sees Iran, Turkey, and Saudi Arabia as aspirants for Islamic leadership. He admits an Islamic north divides Africa but he does not record the Christian revolution in the rest of Africa. He alludes to Brazil and Nigeria as large states, if not core. His paradigm is a work in progress.

In an incisive grouping, he labels Australia, Turkey, and Mexico as "torn countries." Turkey, which belongs to Islam, seeks European integration. Mexico, which is culturally Latin (read 'Catholic'), looks North to belong to the West. Australia, tied to the white West in its mind, is yoked to yellow Asia in its geography. They are all torn betwixt civilizations.

Another useful category he introduces describes strategic approaches of surrounding states to emerging core states -- 'bandwagoning' or 'balancing.' Bandwagoning implies a degree of trust that allows emerging regional powers a certain dominance and deference. It is making friends with the big guys and acknowledging their preeminence. (In Henry Kissinger’s book On China, he basically proposes that is the best way to deal with mighty China.) Balancing is forming alliances to counter the emerging power so it cannot establish hegemony. That is the strategy of organizing all the little guys, hopefully with an outside big guy as a partner/guarantor. These are useful concepts in thinking about both Russia and China. Both core civilizational nations have strong sensibilities of their own region in which they are the dominant power expecting some deference. The massing of land troops by NATO on Russia’s western front and the US maneuvers in the South China Sea are clear challenges  to the core state’s regional hegemony. The fact that both of these countries lost millions of soldiers and civilians in World War II from invasions through these entry points is not an added plus for US historical sensitivity. Huntington warned: "In the coming era, the avoidance of major intercivilizational wars requires core states to refrain from interfering in conflicts of other civilizations." If one adds the US backing of Saudi Arabia to prevent the emergence of Iran as the principal Islamic power in the Mideast, the United States is 3 for 3 in not heeding Huntington’s warning.

Professor Huntington’s book could only be written by an older man. It is a powerful explanatory tool -- a true paradigm shift. This essay is written in admiration. Next week we will raise a substantial objection which redraws his map quite significantly, but safeguards the principal religious insight of the new paradigm.