The Archbishop of Los Angeles, José Gómez, has dedicated this 116-page book "to an immigrant’s son and the first pope from the New World." Immigration and the Next America: Renewing the Soul of Our Nation is written in a very different voice than most public policy and philosophical works of Catholic clerical and lay intellectuals. As a generalization, conservatives tend to favor philosophical arguments while liberals employ sociology. This bishop speaks of the sovereignty of God and the destiny of nations. In his first chapter he takes a highly unusual approach in favor of immigration by arguing not for more porous borders and a more humanistic sense of personal identity; but for a deeper commitment to a thicker, more spiritual understanding of duty and national citizenship. He argues there can be no real immigration reform without a renewed and religiously grounded understanding of American citizenship. He does not want the immigrant to be a non-harassed free agent. He wants him to be integrated into a real civic fraternity bound by a sense of duty to the common spiritual mission of a renewed nation. That, really, is a different argument. 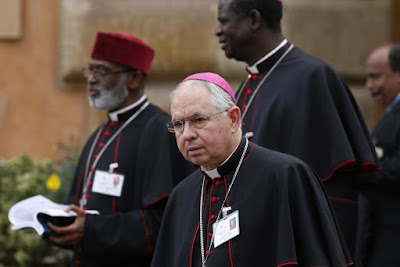 Many of the reviewers of this book seem to pat the archbishop on the head, and bemoan that he wasn’t quite up to the tough specifics of policy reform. They missed the central deep currents of the book. In his second chapter ("The Greater America") he introduces us to Californian historian Herbert Bolton. Bolton believed the only way to understand the meaning of our nation was to consider U.S. history in light of the "larger historical unities and interrelations of the Americas." For Archbishop Gómez, if we look at "the greater America" we will see "America in light of the Christian mission to the Americas, from the top of what is now Canada to the ends of South America and across to the Caribbean. America is actually the historical product of at least three different 'missions' – the first ones of the Spanish and French Catholics, and the later settlements of the Puritans from England… It is the place where the main branches of European Christianity have met. Americans are both children of the Protestant Reformation which prevailed in England and children of the Catholic renewal or Counter Reformation which was centered in Spain and Rome... America was born from the Christian mission. This is not an article of faith or a pious wish. It is a historical fact. This nation was discovered as part of the great commission that Jesus Christ gave to his Church: to proclaim his Gospel "to every nation."

Bishop Gómez writes and thinks more like Saint Augustine and Catholic historian Christopher Dawson than any American prelate I have ever read. He understands that nations have corporate lives which play as large a part in salvation history as the struggles of one man’s soul. He quotes Augustine, "God can never be believed to have left the kingdoms of men, their dominations and their servitudes outside the laws of his Providence." He grants that his modern reader may not believe that America can only be understood in terms of God’s plan for history. But he correctly insists that the men who wrote "in the course of human events" and of "the laws of nature and Nature’s God" had entrusted their covenant of nation-building to "the protection of Divine Providence." 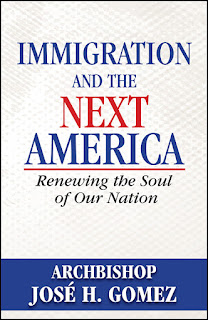 The archbishop has a high view of the American Dream. He agrees with G.K. Chesteron that America is a "spiritual adventure" because "alone among the nations in history America has been engaged in a historic struggle to build a ‘cosmic commonwealth’ by molding many peoples into the visible image of the citizen." Immigration reform is part "of an even more comprehensive reform, a project for American renewal, aimed at forming a a new national identity and civic culture…We will need to seek a new 'patriotic grace' to develop a unity worthy of our missionary and immigrant heritage. It must be based on our founders’ dream of America as one nation of equality and freedom under God." Unlike so many Catholic intellectuals, Archbishop Gómez does not think civic understanding begins with a celebration of the dignity or rights of the individual. He quotes the German Lutheran martyr Dietrich Bonhoeffer who had lived in New York during the 1930's: "American democracy is not founded upon the emancipated man but, quite the contrary, upon the Kingdom of God and the limitation of the earthly powers by the sovereignty of God." This is a crucial distinction in understanding the kind of Biblical and God-soaked language which animated the interracial brotherhood movement of the 1960's (see Stone of Hope, by David Chappell, on how that prophetic religious movement transcended the language of rationalistic liberalism.) That same language will be needed for a true renewal of America and a solution to the immigration dilemma. His emphasis corrects the strategic mistake of both the pro-life movement and much of the neoconservative political project. They ground political discussion in "the dignity of the person" which easily morphs into the reigning ideology of "the autonomy of the individual."

In assembling his argument for the American Creed, the archbishop battles no straw man but dissects the identity narrative of the late, and very influential, Samuel Huntington of Harvard. Huntington’s students include Francis Fukyama and Fareed Zakaria, while his books include the seminal description of multipolar world order after the bipolarity of the Cold War (Clash of Civilizations.)

The archbishop charitably dissects the professor's book on American identity (Who are We?) in which Huntington rooted American identity in the English language, the Anglo-Saxon legal traditions, and Protestantism. Both Huntington’s work and the Gómez critique are important to read in understanding this debate. (It is a curious aside that the historically literate and culturally nuanced Catholic political thinker Pat Buchanan seems much more the Boston Brahmin than an urban Irish Catholic in this conflict.)

Archbishop Gómez is clear that "in order to insure the dream, we will have to challenge the secularist, multiculturalist, and relativist consensus that in recent years has taken hold among elite thinkers and opinion shapers in our universities, cultural centers, and government." America has gone astray, he says, "embarking on an uncharted path -- trying to live without God." Immigration reform is essentially a religious project, in the original sense of the word -- religion as what binds us to ultimate things and connects us to one another.

Archbishop Gómez has written a book which he continues to say is about much more than immigration reform. He contends that the apparition of Our Lady of Guadalupe, in December 1531, "is the true spiritual foundation of America – and of all the nations of the Americas, North and South.” His book is a profound meditation on race as well as American citizenship and immigration. That is another conversation which we cannot have if we do not include God. Is it possible that forging interracial brotherhood under God may become what he means by the "deeper human ties and sense of duty" needed for citizenship? Is this not the missing language in the Ferguson (Missouri) and New York City interracial debates of December 2014? The full integration of black men in the citizen duties of urban protection led by local policemen might be another fruit of "renewing the soul of our nation." Understanding the shared political ('polis' = member of a city) identity and protective duty between police officers and black males is a religious notion of male citizenship. It is just the kind of elevated religious/political category that the archbishop has championed. He is carrying out his apostolic commission to baptize the nations.

The appearance of the Lady 500 years ago in the middle of the Americas came in an era of horrific blood sacrifice and interracial wars. She came as a woman of mixed heritage, a mestizo. She came to lift us up. The message of this book is to listen to her, and follow her Son, to deepen our social bonds through religious citizenship. Many roses will follow.

The message of this review is that Los Angeles has a new and very different bishop. We should listen to him as well. 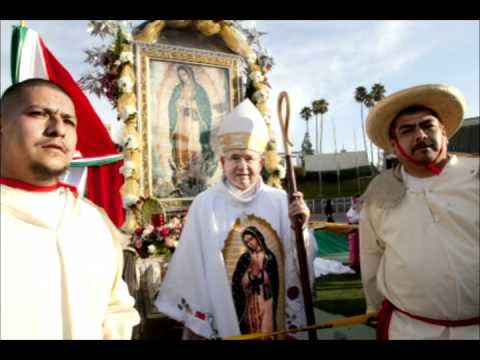