Friday BookReview -- Calvin and Geneva: Light for the City 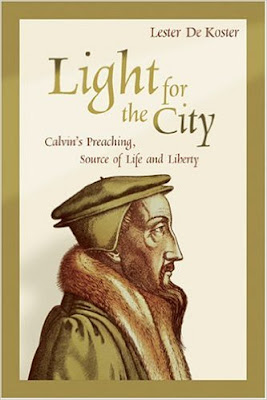 This 130-page book by a late professor of speech at Calvin College is a masterpiece of religious and political argument. If you think America's Protestant past has made us libertarian individualists, this book might reorient your mind to the deep communal roots of that peculiarly American patriot -- with his gun, his plow, and his Bible.

The Russian communist Leon Trotsky (1879-1940) called Marx and Calvin the two greatest revolutionaries of the West. Professor De Koster reminds us that one's Utopia and "new man" led to the Gulag; while the other's obedience to the Word Proclaimed led to the civic bonds of city and nation.

John Calvin (1509-1564), the French-speaking theologian of the Protestant Reformation, had studied Latin and philosophy to become a priest but turned to law school at age 16. It was there that "God, by a sudden conversion, subdued and brought my mind to a teachable frame... " At age 27, Calvin fled the Catholic persecutions in France that followed the Affair of the Placards (Oct 17, 1534). All over France (including on the bedchamber door of the King), anti-Catholic posters deriding the "horrific abuses of the papal Mass" appeared that morning in the best-orchestrated street theatre of the religious wars. The Catholics of the time were not so appreciative. They took the desecration of the Mass a good deal more seriously than Catholics in our own age. Calvin and many other known Protestants fled for their lives. How God works His ways!
It was Calvin's fate that before reaching the "scholarly seclusion of Strasbourg" to continue work on the seminal governing text of the Reformation (Institutes of Christian Religion) he would encounter a French-speaking Swiss town in need of civic and ecclesial organization after the expulsion of its Catholic bishop. "It was to be town, not gown, as his destiny."

De Koster adds, "God chose to demonstrate through Calvin, Calvinists, and their impact upon the western world that His Word can be preached into that highest aspiration of human wisdom, old and new and Divine -- the City... the civis of Cicero, the polis of Aristotle, the civitas Dei of Augustine."

Professor De Koster finds in the Calvinist religious doctrine of predestination the soil for a Christian life of liberty in the City. The question of individual salvation which so inflamed the Lutheran/Catholic debates was settled for Calvin by God's foreordaining salvation or damnation for each individual soul. Calvin's perspective is found in his letter answering the Catholic cardinal Sadolet (who had urged the citizens of Geneva to return to the Catholic sacraments for the good of their souls):


"It is not a very sound theology to confine a man's thought so much to himself and not to set before him as the prime motive of his existence -- zeal to illustrate the glory of God. For we are born first of all for God and not for ourselves. This zeal ought to exceed all thought and concern for our own advantage... It certainly is the part of the Christian man to ascend higher than merely to seek and secure the salvation of his own soul."


This startling claim condemns tent evangelism as the best way to save souls, in the same breath that it derides Catholic sacramental grace dispensaries.

What then is Christianity about? "Let each of us remember," Calvin says, "that each has been created by God for the purpose of laboring and of being vigorously employed in His work, and that not only for a limited time, but till death itself and that he should not only live but die to God." Besides useful labor the Christian is meant to give glory to God by living in a highly ordered civic community -- to make a shining "city on the hill." Calvin's signature masterpiece -- his Institutes which was published in 1559 -- culminates in the fourth book with a dissertation on both ecclesial and civic organization.

Because one's salvation is already determined,  the Christian living in the interim is to give glory to God by carrying out his task in the church, at work, and in the civic community. The City is not the Church, but Calvin's City is shaped by the Word and disciplined by the civil government:


"The function (of government) among men is no less than that of bread and water, sun and air; indeed its place of honor is far more excellent. For it sees to it as all these do that men breathe, eat and drink, and are kept warm. It embraces all these activities when it provides for them living together. It does not look to this only, I repeat, but also prevents idolatry and sacrilege against God's name, blasphemies against the truth and other public offenses against religion from arising and spreading among the people. It keeps the public peace, and provides that each man keep his property safe and sound, that men can carry on blameless intercourse and that honesty and modesty may be preserved among men. No one ought to doubt that civil authority is a calling not only holy and lawful before God but also the most sacred and by far most honorable of all callings in the life of mortal man."

This city is not the church. But the city is the communal day-to-day way men give glory to God. De Koster explains: "God's Word comes to all upon the pages of Holy Scripture, incarnate in the language there prevailing. The sermon is the divinely prescribed manner of broadcasting that Word into time, world, and history. It is God's way for getting His Will incarnate in human behavior. The goal of the ordained preacher is to bring God's word into incarnation in the creation of the city and the maturation of the soul."

This is not a narrow notion of church employees lobbying legislators for favorite bills or churchmen "speaking out on the issues." This is making new men through obedience to the Word of God and those new citizen-men shaping a particular kind of City. It is the opposite of Utopia.

This richly textured vision of Christian men shaping the city for the glory of God is the super glue of social capital. All men in the city are meant for the same common good: to know and love God, and we are all bound to one another in mutual love and concern as we carry out that high-minded goal. The city in time and history can never repudiate God as Sovereign, or it will fail in its appointed role in the Divine Drama -- and cities and nations have real roles in Salvation History.

Calvin, Augustine, and all Christian citizens of their own nations and cities are builders of proper cities if the civic order provides for all men a setting in which we can know God. This transcendent common good is what overcomes factional self-interest and guards against the hubris of powerful cities and nations who mistake the sources and ends of their own prosperity. The question for the city is the question for man: do you live for yourself or do you exist for God? The so-called "realists" of our own day promote self-interest and the 'will to power' to replace love of God, love of neighbor, and the pursuit of justice as our national ends. The nation bent on negotiating self-interest amidst the nations in the name of realism has abandoned the fundamental reality -- the sovereignty of God and the common destiny of all men to know and carry out His Will.  Not too realistic.

This book is written with a clarity and verve of a man who has listened to the Word and had his heart circumcised by its sword. His voice reminds us that the great souls who shape nations and cities are first forged in the setting in which "pulpits loyally proclaim the lordship of Christ after the manner of Geneva." The City is spoken into existence from the pulpits.  First there was the religious Great Awakening, then there was the American Revolution.

Professor De Koster closes with a chapter called 'Mother of Cities: a Glimpse of the Record.' It is a series of succinct paragraphs describing the cities and countries shaped by the Calvinist "world power" -- Scotland, the Netherlands, Cromwell's England, New England, and the city which shaped our American civilization as surely as London, Athens, Rome, and Jerusalem -- Calvin's Geneva.