Dr. Pence writes on this feast day, the Thursday after Trinity Sunday (a holy day of obligation in the universal Church; and a national holiday in countries such as Brazil, Portugal, and Poland) --


The feast of Corpus Christi seldom inspires dialogue with Protestants. This is unfortunate, for much more than theological formulations of justification and faith, it is the sacral priesthood’s irreplaceable role in forgiving sins and bringing the Eucharist to the faithful that divides Catholic and Protestant.  The consecrated Apostolic Priesthood and the real presence of Christ in the Eucharist are indivisible truths. The faithful Protestant with a Bible in his hand, a heart for his Savior, and the name of Jesus on his lips cannot fathom that liturgical actions of the sacramental priesthood are an indispensable means to proximity with Christ. The personal faith of the Reformers has trumped the priestly works of the Papists.

In the same way as Andrew did with Peter, Catholics run to our brothers saying: “We see the Messiah. Come and be with Him; come and be with us.” We know that believing Protestants want to hear us, but it is a hard saying. They want to be close to Christ. They say He is their personal friend and Savior, and they mean it. But especially during Corpus Christi processions and Eucharistic Adoration hours, the Catholics seem so radically different.

Catholics kneel and say with Thomas, “My Lord and my God” – expressing the awe and veneration owed to the God who made heaven and earth. We join the centurion in saying that we are not worthy that Christ should enter under our roof. In the Holy Communion that immediately follows, He enters under our roof and our souls are healed in an act of incorporation beyond any act of friendship.


Why don’t Catholics display the continued unrelieved intensity of a “personal relationship with Christ”?  Because we live in a different sort of emotional universe.  At times we do not dare the familiarity of friendship, as we take off our sandals with Joshua and “fall down and worship.” Other times we know the communion of theosis for which friendship is too sparse a term.  We admire the intensity of our Evangelical friends, but we should neither envy nor imitate the one-dimensional emphasis on friendship that compensates for centuries apart from the Eucharistic presence. Receiving the Lord in the Eucharist introduces a kind of interpersonal consummation, which generates an abiding peace.  This rhythmic liturgical experience of Presence is less excitable than the enthusiasm of college friends; but like marriage, it is a deeper communion.

Corpus Christi invokes an irresistible lesson from the Book of Nature as well.  Bacteria were the first forms of physical life created 3.8 billion years ago. Bacteria live as single cells or in colonies. They consist of prokaryotic cells, which have no nuclei and multiple coverings – a membrane, a cell wall, and a capsule. Around 2 billion years ago, one of the great transformations in life-forms occurred as certain bacteria lost some of their external coverings (the capsules) and merged with other bacteria to form something new: eukaryotic cells. This type of cell was larger and had a nucleus. Most importantly, the new cells had fewer coverings, and the membranes of their cells were capable of much more complex social interaction with other cells. These cells would develop over time with a capacity to “incorporate” into multi-cellular organisms.

These new eukaryotic cells would become the multi-cellular organisms of the protist, fungal, plant and animal kingdoms. [The protist kingdom is that of amoeba and algae; the ‘silly putty’ of the biological world, or the living goo from which emerges the more defined forms of plants and animals]. 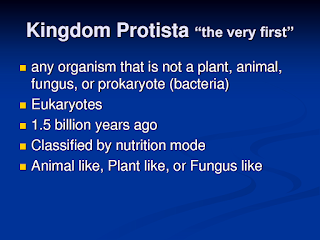 I have always pictured this event as the best biological analogy to the capacity of persons with spiritual souls to be incorporated in the Body of Christ. There is something about shedding an outer self to allow a deeper bonding in a new multidimensional organism that resonates. The sacraments of Initiation and Holy Orders seal our souls with indelible characters that configure us in a radically transformed mode of living. The feast of Corpus Christi calls us to consider this truth: that Christ is fully present in the Eucharist and being incorporated in Him (and participating in His Sonship) is the way members of our species are going to live forever in the Father’s household.


"But for me, that Church of which the Pope is its acknowledged head on earth has as its chief claim that it is the one which has (and still does) ever defended the Blessed Sacrament and given it most honor and put it as Christ clearly intended in prime place.  'Feed my sheep' was His last charge to St. Peter… It was against this that the West European revolt (or the Reformation) was really launched – 'the monstrous fable of the Mass' – and faith/works a mere red herring."

(The eyes of all look towards you in hope, O Lord:
and you give them their food in due season.) 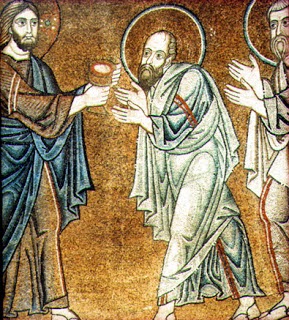 (Behold this bread of Angels
Which hath become food for us on our pilgrimage.)
Posted by Andrew Lynch at 12:00 AM