In remembrance of the men who fought and died during the D-Day invasion of Nazi-controlled France, we remember the words and prayers of our civic and military leaders, President FDR and General Eisenhower, as the invasion was underway. (Here is transcript of Eisenhower order of the day. You will see that the movie-audio version we link to strangely leaves out the last line which made it a prayer.) Listening to Walter Cronkite interview with Eisenhower 20 years later at Normandy is another good way to remember this day. 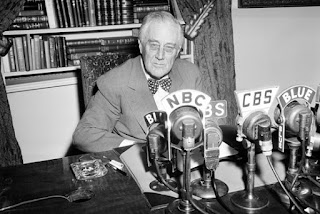 "Almighty God: Our sons, pride of our nation, this day have set upon a mighty endeavor, a struggle to preserve our Republic, our religion, and our civilization, and to set free a suffering humanity." FDR D-Day Prayer.

June 6, 2019 Update: These above words were quoted by President Donald Trump during his trip to England on June 5, 2019 - on the eve of the 75th anniversary of the invasion (AJL). Read President Trump's incredible anniversary speech from June 6, 2019 here.
Posted by Andrew Lynch at 6:00 AM