On the Passing of Dr. David Pence

Today marks one year since the passing of Dr. David Pence. His loss continues to be deeply felt. So much has changed since June 4, 2019. Be it in regards to the coronavirus pandemic or the burning of Minneapolis, our favorite M.D. oncologist and loyal son of the city would have so much to say. Yet we also know how it would pain him to see the fires of race hate decimating the areas just north of his final resting place. Perhaps it’s best that virus-sickened citizens and collapsing Minneapolis have a prayer warrior M.D. among the saints. 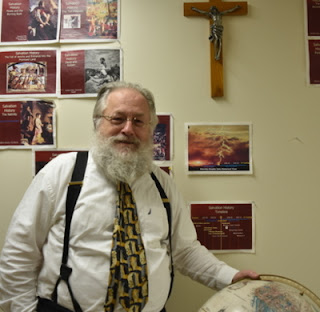 Nevertheless, the voice and vision, friendship and comradery of Dr. David Pence is missed beyond measure.

Much has also changed for me these past twelve months. I am very proud to say that we’ve kept Dr. Pence’s request to continue AoA’s regular posting of R&G’s, along with our sacred and civic time articles. Our book, The Catholic Palette is also in the process of publication. Much of my time this year, however, went to teaching middle school students at an area Catholic grade school. Unfortunately this meant I wasn’t able to do more for AoA. As the school year wound down amid the pandemic, health concerns have led me to leave teaching temporarily until a vaccine is discovered. Yesterday was my last day of work and as of today I plan to give AoA and the “Pence Project” my full attention… mostly.

A year ago my wife and I discovered we were expecting our first son. He was born in the hospital elevator during a snow storm on January 11, and in honor of Dr. Pence we named him David. Now over twenty pounds, “Little” David is a juggernaut of a baby. When he starts to crawl he’ll definitely keep us busy. David and Dr. Pence are receiving much of my attention going forward and I’m happy to take a step back from the teaching world to invest my time in my new son and the work of my “secondary” father.

This idea of a “secondary father” comes from Joseph Campbell. Chuck Palahniuk, the author of Fight Club, spoke of it in an interview with Joe Rogan:


“Joseph Campbell’s idea of that there needs to be a secondary father in men’s lives. You’re born – if you’re lucky – with a biological father that you do not choose,” but each man needs “to choose a new father. That father by choice typically is a minister or a teacher or a drill sergeant or a coach… and you put yourself in apprenticeship to the secondary father. And you have to consign your life to the secondary father, and agree to learn what he is going to teach you.

“There is that existential moment when you realize that you have to sacrifice your youth for something. You’re not going to live forever… you have to become a being-towards-death… and you’ve got to give your life to something.”

I would have loved to discuss this idea of a secondary father with Dr. Pence, but I know he’d hear it and say, “I’m hip!” No young male can mature into a man without undergoing a process of socialization both by a group of men and through the guiding influence of a secondary father. As we mourn the anniversary of his passing, I know that no man could have a better “secondary” father than Dr. David Pence. God love you, Dr. Pence, you are missed! The work – the project – continues.
Posted by Andrew Lynch at 12:17 AM