GOOD FRIDAY: the Anthropology of Sacrifice


Lord has been pleased to crush him with suffering."  (Isaiah 53)

On this Good Friday let us renew an old custom of speaking no words, except those of the liturgy or communal prayer during the three hours of Christ’s hanging on the cross from noon to three o'clock. (If we define the crucifixion as His taking up the cross and the journey up Calvary commemorated in the stations, the ordeal began at 9am), If ever there was a day that our Christian nation should declare as holy, it should be this day of the ultimate sacrifice.

Anthropologists say there are three elements to every sacrifice:

In many animal sacrifices a setting aside of some specially designated animal, a killing of the animal often by a set aside priest is followed by some portion of the animal being eaten as a sign of union between those who eat and the gods. In Christ’s sacrifice we see the setting aside of the one perfect Victim -- the Anointed One (Christos). We hear him cry out: "My God, My God, why hast Thou forsaken me?" And He is killed.

As we leave that haunted hill (where some say David buried the skull of Goliath and others call the Tomb of Adam) we read the rest of the words of Psalm 22 which Jesus invoked. After many verses depicting the numbering of his bones and the casting of lots for his garments, we hear that the innocent victim “will proclaim your name in the assembly,” that “all the ends of the earth will worship you,” and that “deliverance is brought to a people yet unborn.” When we read the “forsaken verse” in the context of the whole Scripture and the practice of the Church, we find our Lord foretelling the Communion that will come from his sacrifice. From his vantage on the cross, our Lord sees the Masses of the future made present at Calvary. From the ends of the earth, God's name is proclaimed in the liturgical assemblies.

Moderns hesitate at the language of sacrifice. They would rather tell the story of Christ in the language of nonviolence and the salvation of all. It seems too primitive and bloody a tale. But sacrifice entails separation and killing—a sword that divides and a sword that slays. These must precede Communion. It is part of the Grammar of Sacrifice. Sacrifice ('sacrum facio' ) means to make holy. Holiness is not so much a statement about morality as one about separateness. We are being offered access to the One Who is Separate. "I am God who art Holy and because I am Holy you shall be Holy." In our prayers and gestures and liturgy, God must be approached as the HOLY ONE who is ultimately separate from all creation because He is the Creator. There is also in this cast of characters an unredeemable Evil One who has spread a pall of death, sickness, and darkness over humanity. In some radical way, man must be separated from the world, the flesh and the devil. All three must be killed for man to enter fully into communion with the God who is Holy.

The cosmos -- which man has only very recently begun to depict accurately -- is revealing to us the reality of election amidst widespread dissipation. Most of matter is heading out into oblivion, and those huge frightening angelic creatures who have been cast out of heaven and now roam the earth seeking the ruin of souls are going to be cast into the isolation of death at the final reckoning. Christ died to restore humans to our original mission and our role as priests, who in the ultimate sacrificial drama are going to participate in the killing of the victim who deserves to be slain. We will join in the exorcism of the Evil One. He was cast out of heaven by Michael. At the death of Christ, he was dethroned from the netherworld. Through the priestly power of the Church from now until the Last Judgment we are participating in casting Him out of our lives into Hell.

Adam was the first set-aside priest who was supposed to cooperate with the Angels in obeying the will of God to cast out Satan and dominate the earth. Out of all matter in the galaxies, some matter on the planet Earth was set aside for life. Out of the soil of life, only Adam was formed by a spiritual soul. Adam failed in his mission, so the new Adam came and died for the sins of humanity. We are now restored to our original mission. Our salvation is not the end of the story. We have been let out of jail to resume the contest that precedes communion. From now on, at the Mass we are at Calvary with the one-time victim who has become the eternal high priest; and the killing is of Satan, sin, self and death itself. The communion is the assembly of the new people foretold in Psalm 22. Those words of Our Lord seemed a cry of despair, but were indeed a promise of the means of our salvation and the restoration of our nature. Christ died on the cross first and foremost to obey the Will of His Father. It is his act of filial piety that returns mankind through our Head to communion with the Father. It is the Atonement. His perfect sacrifice has been done once and for all but we keep bringing those more deserving victims of self, sin and Satan to be killed as well. 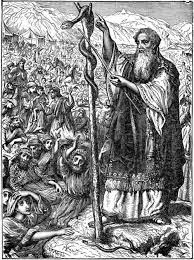 Good Friday was predicted:
"As Moses lifted up the serpent in the wilderness, so must the Son of man be lifted up."


And the Eucharist initiating the great separation of the Last Judgment was likewise foretold:
"Now is the judgment of this world: now shall the prince of this world be cast out. And I, if I be lifted up from the earth, will draw all men to myself."