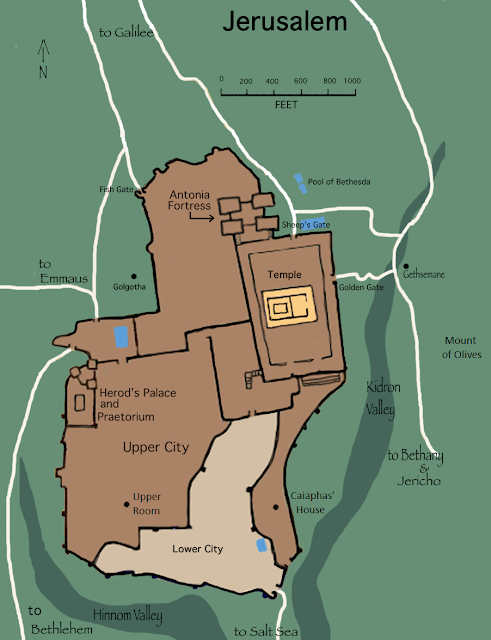 The above map (click to enlarge) depicts the city of Jerusalem as it was at the time of Jesus. Although most of us are familiar with the events of Holy Week (from Palm Sunday to Easter Sunday), most have not been introduced to the spatial and geographic dimensions of Holy Week. This is in some ways true even for those who have made a pilgrimage to the Holy Land. For example, the walls of the "Old City" today are not the walls that stood 2,000 years ago. The walls from the time of Jesus were destroyed by the Romans in A.D. 70 and those that stand today were built by the Kurdish Sunni Muslim, Saladin, during the time of the Crusades. Because of this, the location of the Upper Room (site of the Last Supper and Pentecost) is now located outside the Old City walls despite the fact that it was within the walls at the time of Jesus. (To put the Jerusalem  story in the national context, see our Mapping Israel: from Joshua to Jesus.)

On Palm Sunday, Jesus made his way to Jerusalem along the road from Bethany and Jericho, over the Mount of Olives (see the east, or right, side of the map). According to Matthew 21, Jesus rode both an ass and a colt as he made his way over the terrain and into the city via the Golden Gate (see Matthew 21:1-11). Taylor Marshall suspects that Christ rode the ass, more capable of crossing rugged terrain, over the Mount of Olives and the colt as he rode into the city. He sees in the former an image of Israel under the yoke of the Law of Moses and young colt as a sign of the Gentiles to which Christ will send the Church. It is highly likely that Jesus would have passed by the Garden of Gethsemane on his way down the mountain. Luke records that as Jerusalem came into full view, he foresaw its eventual destruction by the Romans and wept over its failure to accept the coming of the Messiah (see Luke 19:41-44). Below is an image the author took of Jerusalem from the church now standing to mark the place of Jesus' weeping.

As Jesus crossed the base of the Kidron Valley and approached the Golden Gate at the foot of the Temple Mount, he was met by many proclaiming "Hosanna to the Son of David! Blessed is he who comes in the name of the Lord! Hosanna in the highest!" (Matthew 21:9). From here Jesus entered into the Temple where the Synoptic Gospels tell us he overturned the money tables and cleansed the Temple of the those making it a "den of robbers." Some allegorically note that as we prepare to receive the Eucharistic Christ into our bodies - the temples of the Holy Spirit - we proclaim the same words as those at the city gates and await the arrival of the King to cleanse our souls of venial sin through the reception of Holy Communion. 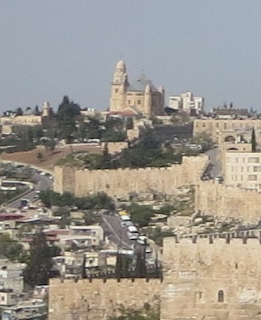 From Palm Sunday we advance to Holy Thursday. The Last Supper took place in the Upper Room, which is named for the guest room that stood above the site of King David's tomb. The site today is revered by both Jews and Christians as the former, segregated by gender, flock to visit the tomb of David while the latter climb the stairs up to the place where the Last Supper and Pentecost took place. The significance of this place to both religions is also why Christians have not turned the site into a church. Nevertheless, this area became the Church's first chancery of sorts as it is where the Apostles originally governed and, just across the street, the place where Mary is said to have entered her Dormition and Assumption. That site is marked today by the Church of the Dormition, visible in the Jerusalem cityscape image above and blown up in the image to the right. Note in the picture that the medieval walls of Jerusalem place the area outside the Old City, but in the time of Christ the walls would have extended much further south. 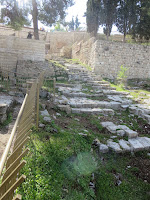 As Jesus, Peter, James, and John departed from the Upper Room for Gethsemane, they may very well have passed the house of Caiaphas. This house included areas to hold prisoners and it would be here that Jesus would have been taken after his betrayal by Judas. Remains of stairs (see left) from the first century have been found and preserved descending on the north side of Caiaphas' house on a path towards the Kidron Valley and Gethsemane below. A few feet from these stairs is the courtyard where Peter denied Jesus three times. Pilgrims today can visit both sites, and go inside the house of Caiaphas and enter into what scholars believe was the pit-like prison into which Jesus was interred the night of Holy Thursday after his pseudo-trail before the Sanhedrin.

While there is little debate over where Good Friday ended, there is some debate today over exactly where some of the earlier events of Good Friday took place. Crusaders believed that Jesus was taken to the Antonia Fortress located at the northwestern corner of the Temple. The fortress, however, was built to stand over the Temple to keep guard against an potential religiously-induced anti-Herodian or anti-Roman riots among the Jews on Temple grounds. By locating this place as where Jesus went  before Pilate, the crusaders left their mark on the location for pilgrims following the Stations of the Cross within the city. It seems that early Christians - and modern scholars - look to a different location for the trial. On the west side Jerusalem (see map at top) is found both the Praetorium (where Pilate lived) and Herod's Palace. As the Gospels note multiple trials taking place during the day between Herod and Pilate, it seems to make more sense that Jesus was not taken back and forth from one side of town to the other but rather shuttled back and forth from two parts of the same general location. If this is the historical case, it would mean that the path set down by the Crusaders for the Stations of the Cross were inaccurate while the western path used by early Christians was the correct one.

The site of the Church of the Holy Sepulcher today marks the place where the Crucifixion and burial of Christ took place. At the time of Christ it would have been located just outside the city walls on the northwest part of Jerusalem. Calvary - or Golgotha, the place of the Skull (of Goliath)  - was the location for public executions. In some traditions this site was the burial place of Adam as well.  The execution sites were near the city gates so travelers and inhabitants would see the punishment for capital crimes. As the site of frequent deaths, it is unsurprising that burial grounds where located nearby. In fact, so close were they to Calvary that the tomb of Jesus is preserved within the same Church that houses Calvary. Within the walls of that Church, the pivotal moments of salvation history took place in which the eternal Son of God won man redemption through His suffering, death, and resurrection. Forty days later - Ascension Thursday - Christ would end his time on earth where this article's story began: the Mount of Olives overlooking the city of Jerusalem. Here Jesus commissioned the Apostles to baptize the nations. From there they went back to the Upper Room with Mary, praying for the next ten days until the Holy Spirit descended upon them on Pentecost Sunday bringing about the corporate body of Christ, the Church.
Posted by Andrew Lynch at 6:00 AM