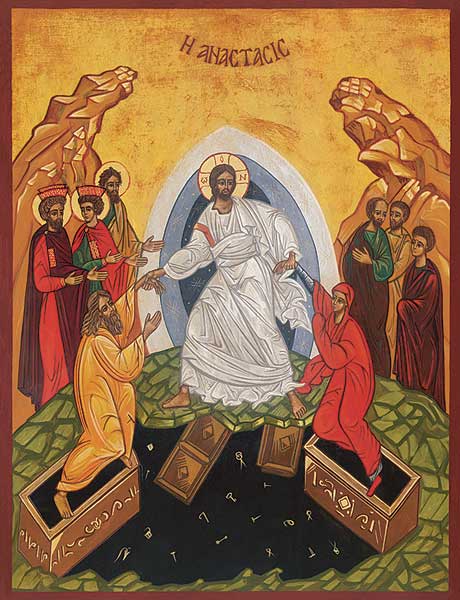 Holy Saturday always seems the most mysterious day of the Church calendar. We are in between two vivid earthly scenes. The first is depicted in the last three Stations of the Cross: Christ’s death, His return to His mother’s arms, and His burial. The second event is on Sunday as eyewitnesses register their stunning reports. Christ’s last words commending his spirit to the Father, and pronouncing his suffering now consummated, are deeply comforting after a night and a day of torture. But what happened from the time of his death to the sighting on Easter morning?

When David went to slay Goliath, he rejected the sword of Saul. He brought five smooth stones – and trust in the Living God –  to his contest. When Christ went to his agony he ordered the sword of Peter back in the scabbard; and bore five open wounds, and trust in His Father, to the Cross.

David brought back the head of his foe to Jerusalem, and many say Golgotha is called the place of a very particular skull (the Philistine giant's). It sits over a grave as well: Adam’s. Christ, too, decapitated his foe – the Prince of this world – no longer Master and now deprived of his sting of death. David’s Lord delivered Adam, Abraham, and a host of others from the prison of death on this day. In the Eastern Church the triumph of the resurrection is depicted as the liberation of the captives. The resurrection of Christ delivers men from the bondage of Satan and initiates the ‘theosis’ of men. The liberated take their place in the Body of Christ, Who will soon be at the right hand of the Father. Finally, we will see man in his proper place.

The Dragon, meanwhile, mortally wounded – and stunned by the loss of so many souls – plots revenge against the new apostolic church which is sent out to exorcise demons, forgive sins, and baptize the nations into a worshipful fighting formation that will ultimately separate Satan from the land of the living.

Holy Saturday emits the same mysterious scent as the time between the Creation/Fall events of the Angels, and the first manifestation of matter. Pivotal angelic contests, transmitted in the shared patristic traditions of the Orthodox and Catholics, flesh out the Biblical narrative. These are not ancillary optional tales of the olden days. Only a drama employing the full cast of divine, angelic, and human characters can hope to present the cosmic scope of these high holy days of our liturgical life.  We learn about these characters as much from liturgical and patristic sources as from Scripture. This fuller view reminds us not to shrink the glory of this upcoming Octave of Easter to the return of "our friend Jesus" as an individual man who beat the Grim Reaper. Christ slew death and rises from the depths of a netherworld where he triumphed in a terrific battle. This is as much Bastille Day as a replay of Lazarus!

The Risen Christ is truly different. He now incorporates thousands of the liberated in His perfecting Body. He has freed our father Adam, and demonstrated the original mission of man: to take back from Satan his unlawful dominion on earth. No wonder our Lord looked so different -- even to those who knew Him best.

UPDATE:  Here are some further links on the subject. Probably the most compelling of all reflections on Holy Saturday is included in the Church's office of readings for this day. Read here an anonymous and ancient homily about our Lord’s harrowing of hell.

This 2002 sermon delivered in Minneapolis, Minnesota, is a learned historical contrast of the Eastern and Western traditions on the meaning of this day and its implications for a time of decision after death for all men. Bishop Hilarion Alfeyev is one of the leading lights of the Russian Orthodox Church.

Also a post by Taylor Marshall, which explains the bizarre teaching of the late Hans Urs von Balthasar; and an exchange in 'First Things'  between a critic and a priestly defender of the Swiss theologian.

This short video on the two Adams is a beautiful refection on the harrowing of Hell and the meaning of Holy Saturday. It is a stunning audiovisual using the complete text of the ancient homily referenced above from the Church's office of readings for today. This is an explanation of the icon above.
Posted by Andrew Lynch at 5:00 AM