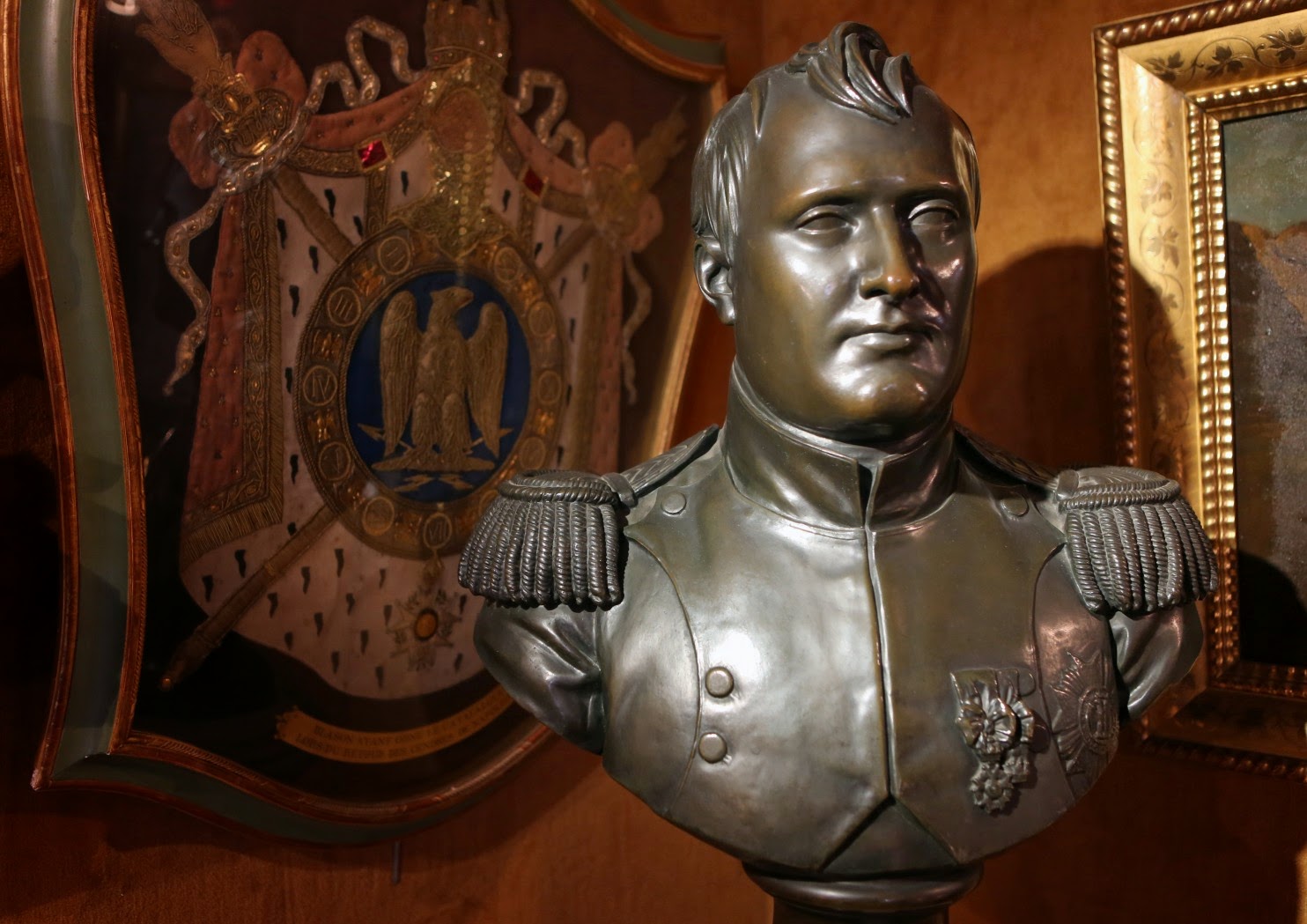 The 'Washington Post' review of Mr. Roberts' take on the Corsican General:

"Ah, if it were only to be done over again!" sighed Napoleon Bonaparte about the Battle of Waterloo as he sailed into exile and imprisonment. He would have six years on the island of St. Helena to ponder his battles, his imperial reign in France, and his improbable rise from Corsican obscurity.

Napoleon was a whirling dynamo whose ceaseless energy led Talleyrand, that wily old cynic, to laconically lament, "What a pity the man wasn’t lazy." And the breathtaking arc of his career has attracted countless chroniclers since his death in 1821, aged just 51. He may be the most written-about human being in history. But perhaps none has taken to the task with greater zeal than Andrew Roberts, the much-garlanded British historian, whose admiration for his subject infuses and enlivens this brilliant new biography. And no charge of laziness would stick to Roberts, who devoted more time to research than Napoleon spent on Elba and St. Helena combined. In the course of that study, Roberts immersed himself in his subject’s 33,000 letters, visited 53 of the 60 Napoleonic battlefields and even sailed to that lonely South Atlantic rock where he ended his days.

Roberts embarks upon this enterprise by observing that much of the source material for previous biographies is suspect. The supposed memoirs and reminiscences of many in Napoleon’s entourage of rackety courtiers were often ghostwritten in an attempt to impugn his memory. And according to Roberts, these accounts have served as ammunition for those who would portray Napoleon as a sort of "proto-Hitler" whose rule laid the moral and intellectual groundwork for more terrible tyrannies to come.

Roberts will have none of that; to him, Napoleon was "the Enlightenment on horseback," swiftly bestowing the blessings of law and liberty upon the lands he conquered. The Code Napoleon was "a reasoned and harmonious body of laws that were to be the same across all territories administered by France," rendered "in prose so clear that Stendahl said he made it his daily reading." Of course, as Roberts concedes, Napoleon used authoritarian means to achieve liberal ends. Religious toleration came at the point of a bayonet. And freedom of expression was, to put it mildly, curtailed. But to Roberts, Napoleon’s replacement of the chaotic political and legal patchwork of Europe with uniformity and rationalism was a benign and civilizing act.

And despite his ruthlessness, Napoleon had a surprising streak of magnanimity. Relentlessly cuckolded by his wife, Josephine, as he campaigned in Egypt, the rising general forgave her and made her his empress. He pursued no vendetta against her somewhat hapless lover, perhaps slaking his thirst for vengeance by himself engaging in multiple affairs.

It’s good stuff, all that political and romantic intrigue, but most readers will doubtless be drawn by the whiff of grapeshot. For it was on the field of battle that Napoleon truly made his reputation, and here Roberts particularly shines. Having visited nearly all the places where 'le petit caporal' fought his enemies, Roberts vividly depicts the dispositions and movements of armies. One can almost hear the sounds of marching feet and booming cannon. And the dominant force in every "near-flawlessly executed battle" was the inspired leadership of Napoleon, who combined tremendous instincts with an almost superhuman capacity for hard work.

But like his subject, Roberts never slights the importance of luck, or as Napoleon often called it, "the goddess Fortune." All history is fluid and contingent — perhaps military history most of all. Tides of battle shift constantly; at Jena and Austerlitz and almost everywhere the Napoleonic hosts contended, the initiative could have been won or lost in an instant. As the general himself said after Marengo, "The decisive moment comes, a moral spark is lit, and the smallest reserve accomplishes victory."

For all his admiration, Roberts gives us his subject warts and all. Indeed, he can hardly contain his exasperation with Napoleon’s compulsion to exaggerate in dispatches and to stuff ballot boxes — such chicanery bred public cynicism and undermined his very real achievements. The atrocities that often attended Napoleon’s campaigns are presented matter-of-factly, though put into context (many people also suffered brutal treatment at the hands of Wellington’s armies). And sometimes his martial instincts failed him; according to Roberts, “Napoleon’s understanding of naval affairs was dismal,” and because of "torpor" and tactical errors he "very much deserved to lose" Waterloo.

And look at the butcher’s bill: Napoleon’s campaigns cost the lives of millions; his failed invasion of Russia alone left hundreds of thousands of French corpses strewn across the ghastly, blood-soaked winter landscape. It is ultimately for the reader to decide whether Napoleon was more hero or villain, and Roberts is scrupulous enough to present ample evidence for either judgment. American readers might quail at Napoleon’s authoritarianism and the carnage of his campaigns. But they should recall that it was the British — while simultaneously at war with France — who invaded the United States and burned the White House. And it was Napoleon who sold the Louisiana Territory to President Thomas Jefferson, doubling the size of the infant nation for less than four cents an acre.

So colossal are the life and career of Napoleon that the sheer scope of the story is overwhelming; he ruled sprawling territories and concerned himself with the minutest details of administration. Fortunately, Roberts is an uncommonly gifted writer, capable of synthesizing vast amounts of material and rendering it in clear, elegant prose. The result is a thrilling tale of military and political genius, and easily the finest one-volume biography of Napoleon in English. 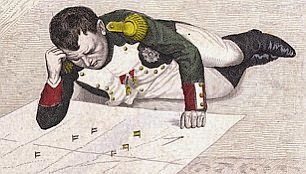 UPDATE: The best documentary I've come across on the subject is "Napoleon the Great." It is in four parts, and narrated by David McCullough.

More than a decade ago, Andrew Roberts came out with his Napoleon and Wellington: The Battle of Waterloo. Here is an excerpt from Brian Lamb's interview with the historian.

In 1960 Dorothy Day wrote a biography of Therese of Lisieux. Here are a couple lines about the saint's father, Louis Martin:

"He had come from a family of military men and... would have preferred a military career, 'but now that Napoleon was dead, who was there for him to follow?' The desire for a leader is in us all, for a leader and a temporal cause, to match in grandeur the glimpses of the Absolute that come to us in rare flashes."


UPDATE: The other day Mr. Roberts was asked: why, exactly, did Napoleon enter into so many wars? He answered that, with a pair of exceptions, it was always the Old Regimes such as Austria -- fearing what might happen to the established reactionary order -- who attacked the French.
Napoleon, in two of his worst decisions, did indeed invade Spain (later termed by him as the "Spanish Ulcer") and, before that war ended, marched into Russia during the summer of 1812.


And from a review of P.L. Levin's book The Remarkable Education of John Quincy Adams:


"[In 1809] President James Madison appointed him minister to Russia at age 42. 'His abilty to provide deeply informed accounts of Napoleon’s wartime machinations and to interest a world power in America’s struggle with Great Britain were of undeniable value,' Levin observes, and those accounts also make fascinating reading, as in a letter he wrote to his mother describing Napoleon’s retreat from Russia in 1813 and noting that 'it has become a sort of by-word among the common people here that the two Russian generals who have conquered Napoleon and all his Marshalls are General Famine and General Frost.'"

Email ThisBlogThis!Share to TwitterShare to FacebookShare to Pinterest
Labels: Book Reviews, Men of the Nations