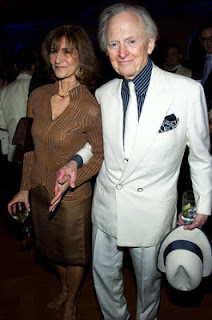 Here is Doctor Pence’s reaction to the latest novel of Tom Wolfe (pictured here with his wife).  The story is set in Miami:


I learned the lessons of life and manhood from my father and I loved him till he died. But once my daughters were older than thirteen, I kept them away from Grandpa’s house and his lewd uncensored remarks. One of those daughters sent me Tom Wolfe’s newest novel, knowing I would never make it to Christmas without buying and devouring Back to Blood. Tom Wolfe is like my dad—a great source of wisdom whom I can’t leave around the kids.

Mr. Wolfe contains within himself a selection of trenchant insights about art, politics, manhood, physical force, status, virile language, and duplicitous reporting. He has created a peculiar literary form to nest those insights in the dialogue of characters he has composed from amongst the living whom he has so perceptively observed. He understands a good deal about sociobiology, so he always sets his writings in large geographic and historical institutional contexts. He has no religious instinct and thus his writing is unprotected by sacral boundaries. The dissipating influences of blasphemy and explicit sexual fantasy mitigate the force of his descriptive powers. His religiously impoverished view of the proper end of life has often prevented proper ends to his well-told stories. This book is an exception. His ending is complete and beautiful. But the telling of this tale is mired so deeply in the pornography he scorns, that more than teen-age girls must be protected and warned: “Don’t come too close.” Mr. Wolfe is not pure enough to be scarred, and so he might not understand how inaccessible this form is to many good readers. His spiritual state is the flip side of “Blessed are the pure of heart for they shall see God.”

Tom Wolfe usually teaches about men, formality, cities, race, sex, and status codes. In this work he adds insights about medicine, the boundaries of humor and language skills, the neurophysiology of the pornified, and a revealing tribute to writers and journalists as real men too. TV reporters almost always enjoy a special kind of villainy in a Wolfean story, and their behavior in real life has always provided ample documentation that his genre is realism. In this tale an anonymous You Tube is the lying visual media, while a WASP newspaper reporter is a true good guy. More importantly, John Smith is -- in his own journalistic way -- a real man.

There are four types of men: priests, warriors, workers, and scholars. Wolfe has always respected and championed the worker and warrior. This time the man of letters is also given his grudging due. For Mr. Wolfe, the priest is still a stranger.

The book is a kind of ‘action comic’ with lots of guttural sounds minus word clouds and partitioning picture squares to enclose them. Its unifying theme is a detective story; its most telling trait a series of well-drawn character profiles; and its enduring wisdom—a set of Tom Wolfe insights smuggled neatly into the dialogue. I cannot endorse reading the X-rated text. But the embarrassed son is obligated to hand down the teachings.

1) Doctors can’t get seriously rich as doctors. Pay abides in performing some service for a fee. No service, no fee. A rich man makes money on vacation. A cash register rings his cut when he is asleep. You want to be rich? You need a product.
2) Young males pay attention and shape their behavior to placate the strongest males or groups that threaten them. Most males do not need to be the top dog -- they need to be in proper relation to the top dog so they are not humiliated or physically harmed by him or his emissaries. If a city or nation does not offer young males a clear path to social recognition as a fellow man, other groups will fill the gap. Being a person is not “being a man,” but being a man for a young man is being a person.
3) Male identity is based on social recognition of one’s place in a communal group. To punish the male, harm him, humiliate him or ostracize him. One form of ostracizing is to withdraw social recognition. One becomes not an enemy but a non-person. It can be lethal if one does not find another social group offering another kind of social recognition.
4) The highest form of social recognition for a man is not to be famous or known by name but to be recognized socially as one bearing the authority of a man in full. It would be a greater honor for Tom Wolfe to go to a small island where the natives say, “There go great man,” than to enter a New York restaurant and have the patrons note, “That’s Tom Wolfe.”
5) The heroic terrain of protective American men exists between a degrading pornographic rutting street scene and the emasculated officialdom of feminist bureaucracy.
6) Men of action are continually at risk of being caught while doing something good which will look like something bad to people who do not act.
7) American men in space (before quotas altered their bond and a female Jonah doomed a ship) were the highest expression of the masculine courage and missionary nature of the American nation.  “Before every mission I told myself, ‘I’m going to die doing this.  I’m going to die this time but I’m dying for something bigger than myself.  I’m about to die for my country, my people, and for a righteous God.’ ”
8) The best way for men to overcome racism is to unite in some common duty of protection in which the best man rules the protective group. The best way to overcome racism between men and women is to fall in love – one couple at a time – and marry.
9) The heroes of this particular book are a black chief of police, a Cuban patrolman, and a WASP newspaper reporter. (In the real world, no one calls his friend an African-American, and in Florida there are no Latinos). The chief is a true leader of men and risks his own job and status to protect his subordinate, the Cuban cop. The Cuban policeman faces racial ostracism but does his duty with graceful prowess and stunning courage. The white newsman goes against white Russians and white Brahmins to do his craft. It is fidelity to his craft, not love of the downtrodden which unites him with other men of different blood.
10) Formalized male relations and honor codes are the only communal forms strong enough to trump blood rites.
11) It is more admirable to be a virgin, a wife, or a mother than a whore; but in the short run, the whores get the attention.
12) Art is a craft – it is the province of a skilled workingman. Art schools, critics, and the ignorant rich in pursuit of the new have abandoned “lines, perspective, modeling, color, harmony”—all that is too old and too difficult.
13) Doctors and nurses started their profession as men and women with a sacred oath to care for the sick. Now they measure their work by fees for service and negotiated wage/benefits.

UPDATE: Back to Blood, in paperback, is $13 at Amazon. But when I walked into Dollar Tree yesterday, there by the front door were a bunch of hardcover copies of the novel for only a dollar.