You say, that of the three men, you are rooting for Mr. Trump?

David Pence: One of the big reasons why, is that Trump has shown himself to be a moderating influence on foreign policy decisions.

All the other guys  want to show how tough they are -- and what a wimp Obama is.

Senator Cruz had an impressive performance last night, though he started abysmally by decrying that we got ten men back (with an apology) when they went into Iranian waters. He would have made sure America never apologized, and we would have "stood up to them".  Why he thinks his ability to turn a resolved dispute into a shooting war is a qualification for the Presidency is troubling.

We are in a war already, and Mr. Cruz wants to pick a fight with Iran and China. He has been a little more reasonable about Russia.

What we need in the Mideast and South Asia are coalitions -- deals, not bluster! Senator Rubio is the worst when it comes to that. He is like the women in the race, in that he has to compensate for his youth by being the toughest rhetorical guy in the room at the expense of the American military. I liked where he was on immigration two years ago, and that's where he should have shown how tough he is by standing up to Trump on the mass-eviction plan... but he fought the countries (China, Russia, and Iran) who were not on the podium, and let the man at center-stage pretty much alone. 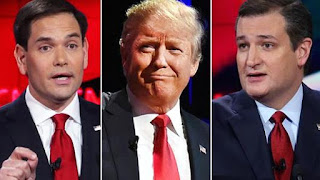 You argue that our nation's long ties with Saudi Arabia and with Pakistan have become indefensible, and that President Obama has at times led the way in re-thinking new alliances.

Pence: I, obviously, think the confusion of President Obama on religion, race, and gender is a disaster... but he is just carrying out the feminist zeitgeist to its logical conclusion. Even Republicans are so tied to that zeitgeist that none of them ever take on the sexual revolution that happened under the Obama presidency. But the Almighty has his purposes.

President Obama's opening to Iran has given the next president a real opportunity to ally with Russia and Iran against the salafist Sunnis who are the major jihadists. There was a question last night to Rubio and to John Kasich on Saudi Arabia (home of 15 of the 19 hijackers), but their answers didn't betray too much study of the Saudi role. Each political party tells a story of the Mideast which is a cartoon, with the other party's president as the villain. It's either 'George Bush started it all with the Iraq invasion' or 'Barack Obama created ISIS by leaving Iraq too early.' You have to tell the Mideast story in terms of the countries and religions of that region, and how our national actions interplay with deeper currents.

Trump says, "We have to figure out what's going on." I hate to use the word humble with him, but he actually has a more humble position about the conflict than his more rabid opponents. Carly Fiorina, the two-week wonder woman, said she would not even talk to Vladimir Putin. Donald Trump said if Russia wants to fight ISIS -- let 'em help us! But for a few weeks, all we hear is how great and wonderful a debater is Carly, and how brash and uncouth is the Donald. Did anyone hear what they said?

Are the debate moderators leading the discussion into the right areas?

Pence: There were no questions in the debate about Pakistan, Afghanistan, India, and China. That is definitely a journalism problem. In this South Asian theater, also, President Obama and his chief advisors have been much more realistic about the source of our troubles: Pakistan, not Afghanistan.  The Obama administration has been cultivating India. We need to jettison the Cold War alignment of allies and enemies for our new situation. I think we have to ask the journalists and candidates to sharpen the discussion about overall strategic plans. It's early in the game; we will get there. I am quite sure we will have a more honest deep discussion with Mr. Trump in the race, than if he isn't.  He is not the Cicero I seek; but, for now, he is getting us closer to the national straight talk we need to reform ourselves.