Russian Geopolitics: The Political Geography and Foreign Policy of Russia

In this third article of a three-part series on Russia, we discuss Russia's political geography and geopolitics. To read the previous articles, follow these links: Russia: Part 1, Russia: Part 2.


Russia is the world's largest nation by land area, while also having the world's third longest coastline. This brings Russia into physical contact with fourteen different nations and makes it a major player across the northern hemisphere and Eurasia. The following sections will examine Russia's relationship to neighboring nations and regions.

I. RUSSIA AND JAPAN

The Russo-Japanese War of 1904-05 witnessed a stunning defeat of Russia at the hands of the rising Japanese. The Battle of Mukden - Japan's most decisive land battle - inflicted some 80,000 Russian casualties; while the renowned Battle of Tsushima Straits - an equally decisive naval battle - annihilated the Russian fleet, sending eight Russian battleships to the bottom. These battles had many long-term consequences: the most fundamental was a sensibility among the dark skinned colonized people from Egypt to Vietnam to India that a white military power could be decisively defeated by one of them. It is striking how many leaders of national liberation movements that would come out of WWII pinpoint the defeat of the Russians by the Japanese as the battle that turned the world of white invincibility upside down.  Despite Japan's defeat in the Second World War, Russia and Japan never settled their border dispute (see a map of the disputed Kuril Islands from Stratfor) or signed a formal peace treaty. As Japan, today, reemerges from its pacifist slumber to face a nuclear North Korea and a growing China, its prime minister, Shinzo Abe, looks to end the border dispute with Russia and even help Russia re-enter the G8. Abe's forward-thinking policy towards Russia - like his policy towards re-armament - will necessitate the re-shaping of his people's views on Russia. A 2010 survey showed that 72% of Japanese hold an unfavorable view of Russia (thus making the Japanese the most anti-Russian people surveyed). For more information on Japan, see our previous Map on Monday: JAPAN.

The relationship between Russia and China has improved since the near war of 1961. Both had sought at the time to be the leader of the communist world movement and their rivalry eventually drove China into closer relations with the United States. Since the collapse of the Soviet Union, China and Russia have forged stronger ties in the face of American power. Russia's smaller population 143.5 million versus China's 1.36 billion, and weaker economy (China exports four times the value of Russia's exports, and China's GDP is five times higher than Russia's GDP) mean that in the new Russian-Chinese partnership, Russia plays a junior role. China certainly values its relationship with energy-rich Russia, and a peaceable border allows both nations to divert military forces elsewhere. Russia does, however, fear Chinese influence in its Far East where Chinese immigration and investment could reorient Russia's eastern extremity towards its southern neighbor. China - seeking to build a "New Silk Road economic belt" - has become the largest trading partner of Tajikistan, Kazakhstan, Turkmenistan, and Kyrgyzstan in Central Asia. Russia's history and current relations with the region (both Kazakhstan and Kyrgyzstan belong to the Russian-led Eurasian Economic Union while Tajikistan, Kyrgyzstan, and Kazakhstan are members of the Collective Security Treaty Organization, Russia's variant of NATO) bring Russia and China into some regional competition.

III. RUSSIA AND THE MIDDLE EAST

Russia is giving military support to the Assad regime in Syria, recognizing his legitimate rule over the nation. From their Syrian naval base and several air bases, Russia has launched air and missile attacks on ISIS and Syrian opposition forces. Russia sees itself as a protector of Christians and established states in the region. It, therefore, sees the bonds between Syrian Christians with the Assad regime as yet another reason to support Assad while attacking ISIS. Russia's involvement in Syria has led to some significant tensions for Russia with the region's Sunni powers opposed to Assad: Turkey shot down a Russian fighter jet in November 2015 (to which Russia has asked Turkey to return the Hagia Sophia to Christians), and overproduction of oil by Sunni regimes such as Saudi Arabia have driven the price of oil - along with Russia's oil revenues - spiraling downward. Russia has a strong regional ally in Iran. Russia has invited Iran to join its Collective Security Treaty Organization. Member nations have the same defense pact as NATO: an attack on one member is an attack on all - an undoubtedly alluring promise in the face of Shiite Iran's tensions with its Sunni neighbors waging a fierce religious persecution of Shiites. Here Russia has come to the defense of the Shiites in Yemen in addition to Iran and Syria, supporting the Houthi rebels (who are trying to fight off the Saudis and al Qaeda) by both diplomatic and military means. Russia is also very involved with the Caucasus region, Russia's land bridge to the Mideast. Here Russia has strong historic ties to the Christian nations of Armenia and Georgia. While Russia would undoubtedly side with Armenia in any dispute with Turkey or Azerbaijan, Russia and Georgia have been at a loggerheads for years with Russia supporting breakaway regions within Georgia. Russia has also had to face counter-terrorism activities against Salafist Sunnis in the region, with fierce fighting in Chechnya. Russia stemmed the terror in Chechnya largely by winning the support and action of Chechen Muslim leaders like the Sufi-Sunni, Ramzan Kadyrov, who is the current President of Chechnya (see also this story on Chechen support of Kadyrov and this BBC profile of Kadyrov)

For more information on the nations of the region, see our previous 'Map on Monday' posts on: IRAN, TURKEY, SAUDI ARABIA, SYRIA, YEMEN, JORDAN, THE GULF STATES, EGYPT, and THE NATIONS OF THE CAUCASUS. 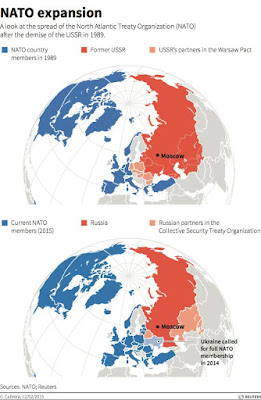 Russia's relationship with Europe has been deeply shaped by geography. As a land power with its core region on the European side of the Urals, Russia has sought to anchor its defenses in the south by the Caucasus and Carpathian Mountains, and in the north by the Arctic and Baltic Seas. The North European Plain to Russia's west, however, is a 300-mile gap in the this defensive arc. Having faced invasions through this passage from France in 1812, and Germany in both 1914 and 1941, the Russians occupation of eastern Europe during the Cold War was seen a geopolitical necessity by the Soviets. At the conclusion of the Cold War, Russia withdrew its military from eastern Europe with the promise that NATO would not spread to the east. Rather than accepting peace and partnership with Russia, however,  NATO broke its word and spread across eastern Europe. The spread of NATO to the Baltic states now puts NATO troops on Russia's borders. A future addition of Ukraine and Georgia to NATO would create three invasion routes into Russia in any future war between Russia and NATO. Russians universally view the era of President Boris Yeltsin not as the coming of democracy but as a national disgrace for the Russian nation when they were ruled by a drunk; and the economic assets of the state were stripped by capitalist opportunists from the national treasury. Russia has acted to secure influence in a special fraternity of Orthodox nations such as Ukraine (where the E.U. and the U.S backed a coup against an elected President sympathetic to Russia) and Georgia. For hundreds of years Russia has considered Crimea part of Russia as a Russian-speaking naval base with a long history of blood shed for the motherland (AOA on Russia, Ukraine, and Crimea) For an excellent examination of Russia European geopolitics, watch this short Caspian Report video.

V. RUSSIA AND THE UNITED STATES

Given the United States' role in NATO, tensions between Russia and the United States have increased significantly in recent years. In fact, Russia has named the US and its allies as a strategic threat to Russian security. Russia has given a decided "no" to Hilary Clinton's reset button - since "reset" meant a return to the days where a weak Yeltsin and a weak Russia were taken advantage of by Mrs. Clinton's husband. Indeed, the bombing of Belgrade during the Kosovo War was a major civilizational blow against the Orthodox nations poisoning any reintegration of  Russia and the European nations. American politicians on both the Left and Right generally speak of Russia as a threat to American security, and there are many who advocate increasing the tensions with Russia and use this position as proof of their strong leadership skills on foreign policy. Russia has retorted by announcing plans to build a memorial in front of the US Embassy in Moscow dedicated to those killed in the Native American Genocide.  Besides the war of words, America and Russia are competing in a physical theater: the Arctic. Americans may think of the world as a flat map, but the Russians have a keen understanding of a spherical world with a northern pole. As new waterways have opened in the far north, Russia has begun building up its Arctic defenses (see this map of Russia's bases across the Arctic) and naval presence (Russia has 40 icebreakers in the Arctic compared to the two icebreakers of the US). Russia has the second largest nuclear arsenal in the world with its total weaponry more than the combined forces of the seven other nuclear armed states.
(An AOA UPDATE ON US, RUSSIA ,UKRAINE).

Russia has also looked beyond its neighboring regions to Africa and South America. Russian investment in Africa has quadrupled in the past decade from under a billion dollars to now over 4 billion dollars. Russian investment in Africa has also led to an expansion of Russia's control over European energy while also building up strong allies in the continent (many African countries, for example, abstained from voting for Russian sanctions over Crimea). In the face of American involvement in Russia's geopolitical neighborhood, Russia has decided to become more involved in Latin America. In 2015 Russia and Argentina entered into a strategic pact in which Russia offered support to Argentina regarding the Falkland Islands.
Posted by A. Joseph Lynch at 6:00 AM