Friday BookReview: A Torah teacher is gathered to his fathers


Last month in Boston one of the leading lights of Orthodox Judaism, Michael Wyschogrod, died at age 87. 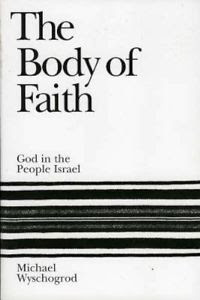 Browsing through his most famous book, one is soon captivated:


God's nature is spiritual -- but it is "untrue to man's nature" to attempt to completely spiritualize our relationship to Him. Why? Because our nature is largely carnal.

Man is not an artificial bifurcation of body and spirit. We are a unity. What is circumcision but "a searing of the covenant into the flesh of Israel and not only, or perhaps not even primarily, into its spirit. And that is why God's election is of a carnal people."

Abraham is wrenched from his natural setting -- "commanded to leave his land, birthplace, and father's house and follow God to a place that he will show him... But the divine command does not stop there. After commanding Abraham to leave, it promises to make a great nation of his seed. The natural is now reinstated, projected into the future instead of rooted primarily in the past, and, above all, sanctified as a natural community."

On the national order: "No one who has read the prophets of Israel can be unaware of the extent to which Israel's faith fears the arrogance of the collective. But the question is, What to do? Shall the domain of the state be written off as the domain of the Devil, beyond the hope of sanctification...?

"To believe that the individual can be lifted out of his nation and brought into relation with God is as illusory as to believe that man's soul can be saved and his body discarded. Just as man is body and soul, so man is an individual and member of a nation... By sanctifying the nationhood of Israel, God confirms the national order of all peoples... In addition, by taking the national order seriously, redemption of the historical order becomes a possibility. History pertains to nations and if only the the individual is real, history is not real. Purely spiritual religions do not take history seriously." 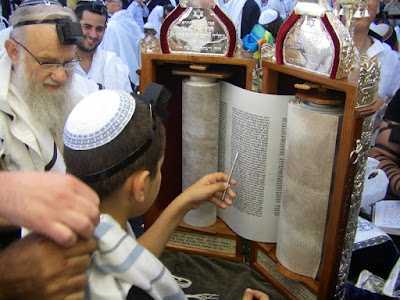 Some excerpts from a 2007 review of the book:

Wyschogrod is a Modern Orthodox Jewish scholar-philosopher, born in Germany, who taught at Baruch College, at the University of Houston, and at a number of other institutions in the USA and abroad. He is perhaps the closest the Jewish community has to a biblical theologian, and for this reason, is more accessible to Christian readers than most.

He holds for the priority of election as a category that must be recovered by the Jewish community. He sees the entire seed of Abraham and Sarah as elect and as one, despite ideological variations and differences. All Jews are obliged to live out the meaning of their election through maintaining Jewish communal cohesion and intergenerational survival. Despite denials and avoidance of all kinds, Jews are meant to live lives of Torah faithfulness as a context and manifestation of authentic relationship with the Living God. He sees the Jews as "the abode of the divine presence in the world. It is the carnal anchor that God has sunk into the soil of creation." As such, Jewish survival and fulfillment of its communal mission is important not simply to the Jews, but to the entire world—for God has chosen to make Hiself one with this people, and to join His name to theirs.

Chapter 1, 'A Partial Knowledge,' discusses the eclipsed role of philosophy in Judaism... Chapter 2 continues the discussion of philosophy, and how the Christian theological tradition has embraced a philosophical approach alien to Jewish epistemology. Christian theology and philosophy abstracts principles, while Jewish revelation and experience are in the nature of story... Israel’s election is communal and corporeal, and this people coheres as an extended family rather than in ideological mutuality. "The foundation of Judaism is the family identity of the Jewish people as the descendants of Abraham, Isaac, and Jacob . . . the seed of Abraham elected through descent from Abraham, This is the crux of the mystery of Israel’s election."

Chapter 3, 'The Personality of God,' further confronts the divide between the Jewish and biblical revelation of God and that of philosophical theology. God is seen as a character in the great story in which Israel plays a central role. He is a person who, by creating a real world of real actors, and by becoming part of the story, freely takes on a certain vulnerability...

Chapter 4, 'Created Being,' is even more philosophical than the foregoing, and examines the relationship between being and God. "The chapter argues that nonbeing is the necessary corollary of being and that nonbeing, expressed in action, is violence."

Chapter 5, 'Ethics and Jewish Existence,' considers the issue of the nature and purpose of law, especially God’s law. Again, philosophical theology is seen as concerned with generalities and overarching principles, while Judaism concerns itself with particulars... The Jewish people and the reality of God are seen to be prior and other than principles and philosophy. The reality that is Israel partakes of the unassailable otherness of existence itself: "God appears in history as the God of Israel and there can therefore be no thought about God that is not also thought about Israel."

Chapter 6, 'The Unrealized,' speaks of the apocalyptic... He advocates for a Judaism open to the future, one that preserves the Jewish people, faithfully awaiting a surprising consummation.

For its scope, clarity, and brilliance, The Body of Faith stands alone, a tour de force that welcomes us into the mind and soul of a great man and profound thinker who, in Abraham and like Abraham, stands before God. Bold and courageous, he confronts comfortable assumptions, Jewish and Gentile, secular and religious. He challenges the Jewish world to live out the meaning of its corporeal election, and the Christian world to recognize that its supersessionism is not only inappropriate, but that any dismissal of the continuing election of Israel removes God from the world.

Wyschogrod’s language is unfailingly careful and precise. His voice is authoritative without self-aggrandizement. He comes across as a humble man, who, out of his service to the truth, has had to speak prophetically to communities that may not like what they hear. While some books must be reread because they are obscure, this one warrants rereading because Wyschogrod calls us to greater depth and breadth than we are accustomed to.

UPDATE: Here is a 2009 essay by a well-known New York rabbi, who did his Princeton doctoral thesis on Wyschogrod's theology.