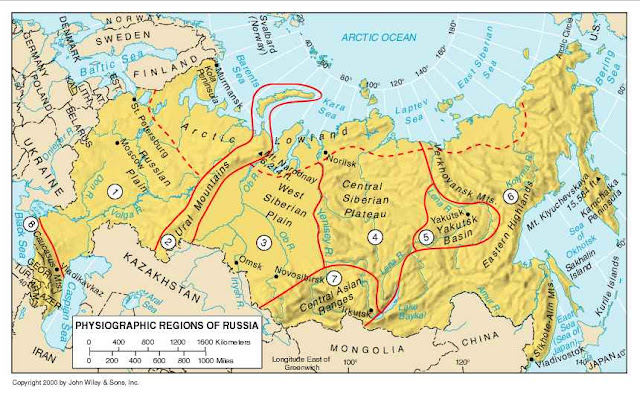 An Overview of Russian Geography

Russia is by far the largest nation in the world. Divided between Europe and Asia by the Ural Mountains and the Caspian Sea, Russia's European lands make it the largest mainland European nation while its Asian lands make it the largest Asian nation. Russia's land area makes it about twice the size of both the United States and Europe and equal to one-eighth of the world's inhabited landmass. Most of Russia, however, is located above 50 degrees north latitude, putting it closer to the north pole than to the equator. This, in turn, leaves Russia with icy tundra in the extreme north; and long, cold winters throughout the country. Siberia - a word that encapsulates the Russian cold - comprises around 77% of Russia, yet comprises a meager 40 million inhabitants (28% of Russia's total population). 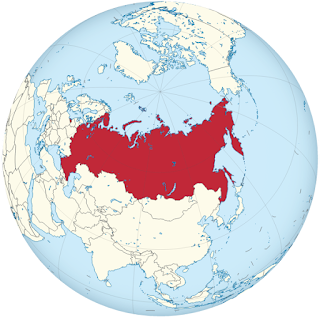 Russia's extensive land borders - running 12,577 miles - face south and west. The vast majority of Russia's southern-facing borders are with Kazakhstan (4,254 miles), China (2,240 miles), and Mongolia (2,165 miles). Each of these southern borders is longer than the 1,933 miles of border between the southern United States and Mexico. Almost 2,000 miles of the approximately 4,000 remaining miles of Russian border are shared with Finland and Ukraine in the west. Russia has another 23,396 miles of coastal borders, with the vast majority of this facing north to the Arctic or east towards American Alaska, the Kuril Islands, and northern Japan. Its remaining coastal areas in the west face the Baltic and Black Seas - both of which have difficult access to the larger ocean - and the land-locked (but oil-rich) Caspian Sea.

Russia can be divided into eight distinct physiographic regions (see map at the top of this article):


1. The Russian Plain (also known as the East European Plain): At the heart of the Russian nation, the Russian plain includes the capital city of Moscow and over 100 million of Russia's 143 population. The Russian plain is located at the extreme west end of Russia, with the Caucasus Mountains to its south, the Ural Mountains bordering its east, and the Barents Sea in the arctic north. To the west, from north to south, are Scandinavia, the Baltic Sea, mainland eastern Europe, and the Black Sea. The physical geography of this region is diverse, with the mountainous south giving way to steppe-grasslands (running from Ukraine eastward across Turkic Asia). Further north are found temperate forests, the boreal forests of the taiga (Russian for "forest"), and finally arctic tundra in the far north. Running through the core of Russian Plain is the Volga River, Europe's second longest river. Emptying into the Caspian Sea, the Volga's watershed (drainage basin) includes eleven of Russia's twenty largest cities.

2. Ural Mountains: Together with the Caspian Sea to its southwest, the 1,600 mile-long Ural Mountains act as a divider between Russia's European and Asian land areas. Though separated by sea, the Novaya Zemlya archipelago is a continuation of the Urals into the arctic. The Urals are home to important mineral resources, such as coal, oil, natural gas, potassium salts, chalcopyrite, nickel oxide, gold, platinum, chromite, magnetite ores, bauxite, talc, and fireclay, along with emerald, amethyst, aquamarine, jasper, rhodonite, malachite and diamond. As Russia expanded into this resource-rich region during the 16th century, the Urals acted to dramatically aid in Russia's industrial development.

3. West Siberian Plain: On the east side of the Ural Mountains is the great West Siberian Plain. At almost 1 million square miles and mostly under 330 feet elevation, it is the world's largest unbroken lowland. The Yenisei River (the world's 5th longest river) acts as its eastern border while the Ob River (the world's 7th longest river) flows through the heart of the region (originating in the Altai Mountains in the south). Poor drainage, combined with the region's elevation and river systems, makes the West Siberian Plain home to the world's largest swamps and floodplains. This, combined with the harsh winters and mild summers, has made much of the area inhospitable to agriculture (see this map for a better understanding of agriculture across Russia). The region is, however, rich in oil and natural gas and was an important center of energy production during the 1970s-80s. The region borders the Kara Sea in the arctic north while most of the population lives in the south. The city of Novosibirsk (population 1.5 million), sitting along the Ob River in the region's southeast, is Russia's third largest city (after Moscow and St. Petersburg).

5. Yakutsk Basin: Flowing north from Baikal Mountains, the River Lena and its tributaries form a river basin exiting into the Laptev Sea. The Lena is Asia's third longest (and the world's 11th longest) river. The area takes its name from the Russian city of Yakutsk founded in 1632 (the same year the charter for the Maryland Colony was created, and construction began on the Taj Mahal). Today almost 300,000 live in Yakutsk and it remains the coldest major city in the world and the only city built on continuous permafrost. Yakutsk is an important diamond supplier, and the region as a whole is another mineral-rich area for Russia.

6. Eastern Highlands: At the Russian Far East is the Eastern Highland, an area of mountains and volcanic/seismic activity lining the Pacific Ring of Fire. The region shares southern borders with Mongolia, Manchurian China, and North Korea and looks towards North America and Japan across the Sea of Japan, Sea of Othotsk, and the Bering Sea. Its arctic north in turn faces the East Siberian Sea. The Verkhoyansk Mountains form an arc dividing the region into a northeastern half and a southern half. Although these mountains contain important deposits of coal, silver, lead, and zinc, harvesting these resources requires dealing with some of the lowest recorded temperatures on the planet. Jutting south at the extreme eastern edge of the region is the Kamchatka Peninsula wedged in between the Pacific to its east and the Sea of Othotsk to its west. Kamchatka has 19 active volcanoes with Klyuchevskaya Sopka (15,584 ft) being the largest active volcano in the Northern Hemisphere. Off the southern coast of Kamchatka is a string of islands leading to Japan called the Kuril Islands. These islands essentially form an eastern peripheral boundary to the Sea of Othotsk and are thus important to both Russia and Japan (see also our Map on Monday: JAPAN). In the region's southeast along the coast of the Sea of Japan lie the Sikhote-Alin Mountains. This mountain chain anchors Russia's border with North Korea and its easternmost border with China. At its extreme south is the city of Vladivostok (population 600,000), home port of Russia's Pacific Fleet and the end of the Tran-Siberian Railroad. The Amur River (the world's 10th longest river) forms much of the region's border with China.

7. Central Asian Ranges: The eastern and western Sayan Mountains form much of the Central Asian Ranges. The mountains have also acted historically as a natural border with Mongolia to the south (see also our Map on Monday: MONGOLIA). The Sayans are also rich in both mineral resources and forests.

8. Caucasus Mountains: Just south of the Russian Plain in Russia's European area are the Caucasus Mountains forming a natural border with the Islamic Middle East. This mountainous area is also an isthmus between the Caspian Sea and the Black Sea. Europe's highest mountain, Mt. Elbrus, is located in the Russian Caucasus. The region is shared with three nations: Georgia, Armenia, and Azerbaijan. For more information on this region, see our Map on Monday: NATIONS OF THE CAUCASUS.


In the next of this three-part series on Russia, we will address her communal loyalties by examining Russian language, ethnicity, religion, and history.

Visit this link for a map of Russia's vast mineral resources. Strafor has a short video explaining Russia's geographic challenges with excellent information about the North European Plain as Russia's weakest point of defense from European invasion. You can also find more information on Russia by visiting its page on the CIA World Factbook.
Posted by A. Joseph Lynch at 6:00 AM