I. A Brief History of Russia

The Russian nation has its origins in the confluence of Slavic, Viking, and Greek interaction in what is today Ukraine - a fact that will forever intertwine the brother nations in a shared history, culture, ethnicity, and faith. Russian history begins with the formation of the Kieven Rus in 882 by a Viking named Oleg, who conquered Kiev, declared it the "Mother of Rus' cities," and made it his capital. The Rus played an important role in trade and relations between Europe, the Byzantine Christian East, and the Islamic Middle East - a historic role Russia continues to perform to this day. Upon seeing the beauty of the Liturgy celebrated in the Hagia Sophia of Constantinople (which the Slavs called "Tsargrad"), Kieven ruler St. Vladimir (r. 980-1015) adopted Orthodox Christianity for the Rus in 988. Ruling with his twelve sons, St. Vladimir brought a Greek religion to a Slavic people under Viking rule.

The Kieven Rus came to an end with the Mongol invasion of 1223. Mongol dominance over the Rus left its inhabitants with a deep awareness of its geographic vulnerabilities - which would one day lead to a rapid expansion of buffer territory, once rid of Mongol rule. Leadership for this endeavor, however, would come not from Kiev but from Moscow. The head of the Russian Orthodox Church - which had already fled Kiev - settled in Moscow in the early fourteenth century, and Moscow led the way in dealing with Mongol rule culminating in a Mongol defeat in 1380 (The thesis of Lev Gumilev on the contribution of Mongol warriors to the Russian personality). The foundations of the Russian state were laid by Ivan III (r. 1462-1505) who tripled the size of Moscow's rule and became known as the "gatherer of the Rus' lands." Ivan married the daughter of the last legitimate claimant to the Byzantine throne - an act that, with the fall of Constantinople ("New Rome") in 1453, made Moscow in Russian eyes the Third Rome and protector of eastern Christians. Ivan IV ("the Terrible"), Russia's first formal Czar, expanded Russian lands eastward to the Urals and into Islamic lands, thus making Russia a multi-ethnic and multi-religious state. Russia soon faced problems from military incursions from Catholic Poland and the Islamic Crimea. Crimean Tatars razed Moscow in 1571 and the Poles conquered Moscow and placed their own appointed rulers over Russia in 1605.

The end of the Rurik dynasty (862-1598) led to the Time of Troubles in which
Poles and Polish imposters ruled. While aristocrats squabbled, a cross class alliance led by a  merchant Minin and a faithful Prince Pozharsky took back Moscow and saved Russia from the foreign occupation which followed the loss of a Tsar. This liberation was celebrated on National Unity Day, November 4, a holiday suppressed by the Bolsheviks and reinstated by President Putin in 2005.

After the Poles were driven from Russia and a national assembly elected 16 yo Michael Romanov (son  of Moscow Patriarch Filaret) to the throne in 1613. Romanovs would rule Russia for the next 304 years, ending with the Communist Revolution of 1917. Under the Romanovs came an unprecedented expansion of Russia eastward (see map above). Russian rule reached the Pacific by 1689 and gradually expanded south and west during the 19th century. Peter the Great (r. 1682-1725) defeated Sweden to capture the territory on the Baltic upon which to build a new capital: St. Petersburg. With eyes to the west, in 1721 Peter claimed the title of emperor over a new Russian Empire, forging a new state based on the absolutist model of western Europe. Peter, however, sought to weaken the Orthodox Church. He abolished the Patriarchy and replaced it with a Holy Synod (comprised increasingly of Ukrainians rather than Russians) and declared that no man could enter the monastery until the age of 50. Russian wars with Persia and the Ottoman Empire continued Russian expansion south through the 18th century and 19th century. Russia's status as Christian protector state was challenged by France and Britain after the Russians destroyed the Ottoman fleet at the Battle of Sinope.  Russia saw its war against the failing Ottoman empire as an expansion of Christian freedom (See our Dec 30, 2011, on the Crimean War and Religion). The British and French entered the war to challenge Russian naval expansion. The Crimean War (1853-56) in which Christian European states allied with a Muslim State to limit Russian predominance  reverberates today as Turkey flaunts NATO alliances when engaging the Russians.

Wars with Napoleon's France, Kaiser Wilhelm's Germany, and Hitler's Nazis led to two major invasions and a Communist Revolution for Russia. In 1812, 1.5 million Russians (mostly peasants) died during Napoleon's ill-fated invasion of Russia (and conquest of Moscow). Hitler would launch his own invasion in 1941, never capturing Moscow but leaving over 20 million Russians dead in the attempt. Around 3 million Russians died during World War I - which led directly to the atheist communist conquest of the nation by Lenin and Stalin (the latter of whom killed as many Russians as did the Nazis). Fearing a future invasion, the Soviets kept close control over eastern Europe. The end of the Soviet rule came in 1989 with an agreement that NATO would not inch its way towards the Russian border. After a decade of troubles under Yeltsin and the continued eastern encroachment of "the West" during the 1990s, the rise of Vladimir Putin in 2000 came as post-Soviet Russia seeks to reclaim its past while looking to the future.

Although Russia is home to over 185 different ethnic groups, Russia's overall population of 144 million is about 81% ethnic Russian. The Russian ethnicity is part of the Slavic ethnic group, with Russians worldwide comprising about 150 million of the world's 350 million Slavs. The top ten non-Russian ethnic groups include: Tatars (5.3 million), Ukrainians (1.9 million), Bashkirs (1.6 million), Chuvashs (1.4 million), Chechens (1.4 million), Armenians (1.2 million), Avars (900k), Mordvins (744k), Kazakhs (647k), and Azerbaijanis (600k). Of these, only one ethnic group (the Kazakhs) lives outside of European Russia or the Caucasus region.

Russia internal organization, however, gives political expression to its ethnic diversity. Russia is politically divided into 85 federal subjects. These federal subjects might seem at first akin to US states, but some federal subjects are cities (like Washington D.C.), others provinces - and 22 are considered semi-autonomous republics. These republics within the Russian Federation are rooted in an ethnic group which gives the republic its name (i.e. Chechnya or the Chechen Republic is named after its dominant ethnic group: the Chechens). Each republic has the right to institute its own official language and has wide latitude in establishing its own laws. These republics have been prone to separatist movements, but  some ethnic groups no longer fully reside within their geographic republic and thus diminish their capacity for union, organization, and revolution.

The map below (click here for a larger version) is demographically dated, but it does show the various republics within the Russian Federation while giving the reader a good idea of Russia's various ethnic groups and where they are to be found on a map. Unlike the map at the very top of this post (though also a good ethnic map), the map below connects ethnicity with polity. For an updated set of numbers pertaining to the modern population percentage of the titular nationality versus the ethnic Russian population, see this demographic chart (scroll down the page to see the demographics chart). The chart also includes information about each republic's language and dominant religion. 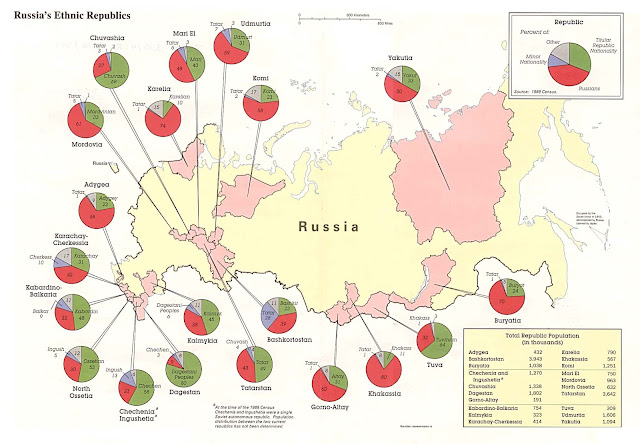 Dominant language groups in Russia, besides Russian itself, include Turkic, Caucasian, Uralic, and Mongolic languages. As their names suggests, the Caucasian and Uralic languages are prevalent in and around the Caucasus and Ural mountain regions. Turkic and Mongolian languages - both historically spoken by steppe peoples (the steppes running across Russia's south) - are found in the Caucasus region, along Russia's south, and in the Russian far east. Mongolic, for example, is dominant in the Caucasus region republic of  Kalmykia and the far eastern republic of Buryatia. See also our Map on Monday: The Turkic Peoples for a map displaying the broader Turkic-speaking world.

Religion in Russia is dominated by Russian Orthodoxy. Almost 60 million Russians identify as practicing Orthodox Christians (see this map of Russian Orthodoxy throughout the country). Although the Russian Orthodox faithful amount to only 41% of Russia's population, the faith is slowly rebuilding after decades under atheist communist rule. Rebuilding the faith also means more than simply bringing back the faithful - Putin is also seeking the reconstruction of two monasteries and a church within the Kremlin itself. Russia's 140,000 Catholics look to Pope Francis while the Orthodox in Russia are led by Patriarch Kirill. According to Orthodox Metropolitan Hilarion, the two great Church leaders are getting closer each day to a future meeting.

Islam is the second largest religion in Russia. The 9.4 million Muslim Russians comprise about 6.5% of the Russian population (compared to 3.3 million Muslim Americans or about 1% of the US population). Most Russian Muslims live in the Caucasus region (click here for a map of Islam in Russia and note that all of the highlighted regions are semi-autonomous republics included in the ethnic-political map above). Within Russia's Islamic population, Sunni Islam is the most prevalent with Sufi Muslims found also in Chechnya and Ingushetia (both found in the Caucasus region). In September 2015, Moscow opened its largest mosque (with room for 10,000 praying pious Muslims). Putin himself was present for its dedication. While building a place of worship for Muslims, Putin and Russia's government have meanwhile reached out to Turkey about giving the Hagia Sophia back to the Christians.


In our third and final part of this series, we will address Russia's foreign policy and geopolitics. Click here to re-read part one of this series regarding Russia's physical ecology.
Posted by A. Joseph Lynch at 12:00 AM