Friday BookReview: DANTE in this Year of Mercy

Pope Francis is urging Catholics to pick up The Divine Comedy as a way to contemplate the everlasting mercies of our Father in heaven.) 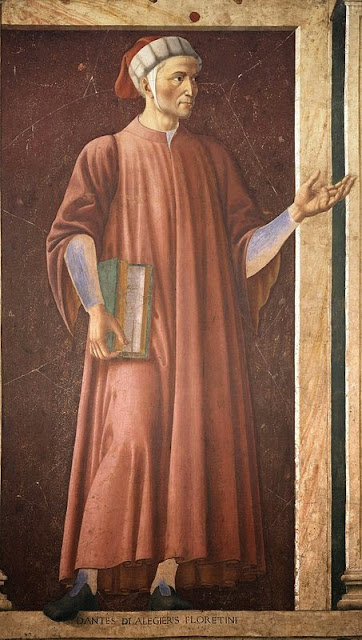 Dante was born in Florence (c.1265), where he achieved literary renown and political power... but was forced into exile for twenty years, and died in his mid-50's in Ravenna on the east coast of Italy.

Here is a brief video introduction to his DIVINE COMEDY.

The journalist Rod Dreher has a new book on how that classic work lifted him out of illness and the 'slough of despond' -- and renewed his heart to appreciate the glory of the eternal Lord. 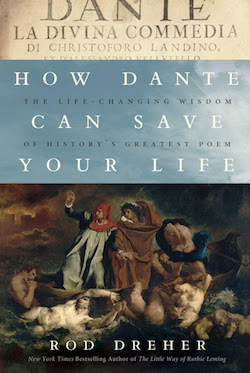 The thing that jumped out at me in Dreher's musings was his insistence that Dante Alighieri (d. 1321) kept two things in balance -- he absolutely loved Holy Mother Church, while he shook with hatred toward clerics who had made their peace with the stench of deep corruption:

"The poet was able to stare down the evil of the clergy, including its Supreme Pastors, condemn them as devils, and yet affirm the goodness of God through the Church, despite its rotten state. This astounded me."    (page 157)

Rod Dreher told a friend: "Dante decided that his wrath was keeping him from doing what he needed to do to get back on the straight path. Virgil told him to use good memories, peaceful memories, to fight off the ones that provoked him to wrath."

I wasn't expecting so much of the tale told by Mr. Dreher to revolve around his family in rural Louisiana, but it works well as a vehicle to gradually draw the reader into the medieval world of Italy and to appreciate the poet's imaginative limning of what awaits each of us when "the roll is called up yonder."

Dreher came to realize that when he moved back to the small town of his parents, he "made false idols of family and place" -- not making those goods subservient to "the ultimate good, which is unity with God." Hoping for a deep reconciliation with his father, Rod ended by realizing that he was "searching for unconditional love where it cannot be found... I had enthroned family and place -- and their personification, my father -- in my heart in the place of God. This was the greatest sin that led me to the dark wood in the middle of the journey of my life."

Mr. Dreher is also blessed to have a wise pastor (a former cop who got burnt out) instructing him:
"The Church is a spiritual hospital... Grace is the medicine that will heal us. Prayer and fasting open our souls to grace."

How did Dante Alighieri view sin? As a metaphysical phenomenon.

Mr. Dreher explains: "To sin is to introduce disharmony into the system... [T]he entire universe runs on the power of love. Sin, therefore, can be thought of as being like a blood clot that disrupts the smooth flow of love... Sin is not an abstract idea but something that is woven into the fabric of reality."    (page 130)

The historian Christopher Dawson called Dante the "truest son of Thomas Aquinas." In the poem, the Florentine genius encounters the Angelic Doctor who urges humility and patience on him -- to rein in his judgment of others, to "affirm the goodness of life despite its injustices." Exile is the human condition; thus, begging mercy from God -- and being merciful -- is our only hope.

"[The two men have had] extensive experience in teaching Dante (a) at the university level, (b) in the Attica maximum security prison [in western New York], and (c) to a group of monks. One of the fascinating revelations was how the young university students preferred reading 'Inferno'; the prison inmates preferred 'Purgatorio'; and the Trappist monks preferred 'Paradiso.'

But what about Dante's original readers in the Middle Ages? ... [They] would have embraced the totality of the mystical experience, as opposed to any single portion of the poem."

The character Dante says: "Then it was clear to me that everywhere in heaven is Paradise, even if the grace of the highest Good does not rain down in equal measure."
(All forms of Procrustean egalitarianism -- along with mindless libertarianism -- will forever cease, along with so much else, when we depart this vale of tears.)

Here is a remarkable EWTN interview with Mr. Dreher.

UPDATE: An excerpt from an essay that Mr. Dreher wrote for 'Intercollegiate Review' --

For Dante, all sin results from disordered desire: either loving the wrong things or loving the right things in the wrong way.This is countercultural, for we live in an individualistic, libertine, sensual culture in which satisfying desire is generally thought to be a primary good.


For contemporary readers, especially young adults, Dante’s encounter with Francesca da Rimini, one of the first personages he meets in Hell, is deeply confounding. Francesca is doomed to spend eternity in the circle of the Lustful, inextricably bound in a tempest with her lover, Paolo, whose brother—Francesca’s husband—found them out and murdered them both.
Francesca explains to Dante how she and Paolo fell into each other’s arms. How could she have controlled herself? she says.


"Love, that excuses no one loved from loving, / Seized me so strongly with delight in him / That, as you see, he never leaves my side. / Love led us straight to sudden death together."


She ends by saying that reading romantic literature together caused them to fall hopelessly and uncontrollably in love—unto death, at the hands of her jealous husband.
To modern ears, Francesca’s apologia sounds both tragic and beautiful. But the discerning reader will observe that she never takes responsibility for her actions. In her mind, her fate is all the fault of love—or rather, Love. We know, however, that it is really lust, and that her grandiose language in praise of romantic passion is all a gaudy rationalization. It’s a rationalization that is quite common in our own time, as everything in our popular culture tells us that desire is the same thing as love, and that love, so considered, is its own justification.

Bishop Barron of Los Angeles offers his tribute to Dante.