Geopolitics and Ocean Law in the South China Sea: China, Philippines, and Vietnam 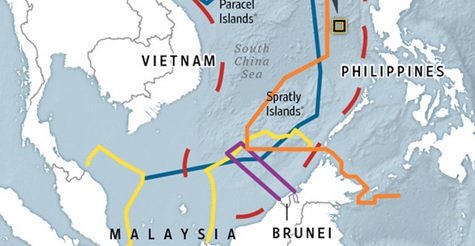 Understanding the dangerous disputes in the South China Sea between China, the Philippines and Vietnam begins with a few maps, some important history and legal definitions from a treaty signed by over 160 nations but not the United States. The old “law of the seas” assumed a three-mile border for all national coastlines and then open sailing in international waters beyond that “range of a cannon ball” distance. The UNCLOS (United Nations Convention on the Law of the Sea) in 1982 established several zones of authority as seen in the map below. 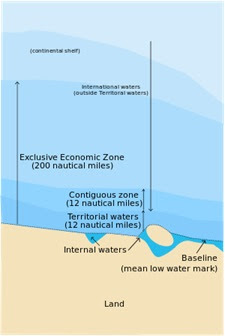 Each country has a 200 nautical mile (a nautical mile is equal to 1.1 miles or 1.85 kilometers) Exclusive Economic Zone (EEZ), in which natural resource claims are exclusive. The twelve nautical mile zones are considered territorial waters in which the country has jurisdiction over regulating use. There are rights of innocent passage by non-military vessels and transit passage for military vessels in narrow straits. The next twelve miles (contiguous zone) is also regulated for taxes and immigration and is a free chase zone if vessels were caught in the inner twelve. These definitions came from the 1982 UN Conference and are sometimes called LOST (Law of the Seas Treaty). China has said it does not accept these international definitions and jurisdiction in the South China Sea where questions of sovereignty must still be settled. The US never signed the treaty because of several disputes about deep-sea mining and the amendment procedures.

China draws the lines very differently. At the end of World War Two, the Republic of China (ROC, soon to be Taiwan) drew the 11-dash line around China and included the Spratlys and Paracel Islands as well as the Scarborough Shoal off the Philippines. Both Taiwan and mainland China are in agreement that these are China’s borders established after a long battle and millions of battle deaths from a local neighbor who invaded across a poorly defended regional sea. When the Chinese make these historical arguments they are often told that in international law, history doesn’t count. They answer that questions of sovereignty are historical matters settled by war and tradition. The 200 mile rule is not meant to replace historical sovereignty claims but establish a uniform law of the sea in areas without competing sovereignty claims. (e.g. Cuba is 90 miles from the tip of Florida.  Neither the US or Cuba can use a 200 mile rule to take resources from the other.)  The red dashed line on these maps mark China’s territorial claim. All the other lines are two hundred mile extensions from various other countries in the region. Obviously there is a lot of overlap. It is not so obvious how all of this is to be resolved. It is not really enough to frame this dispute as innocent smaller countries obeying international law while the big Chinese bullies seek more territory. 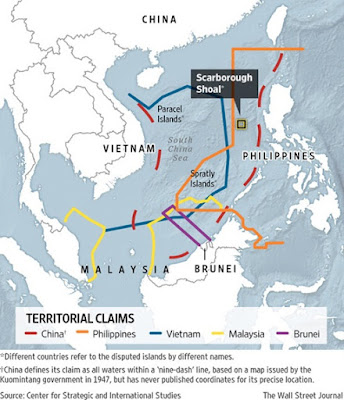 The Paracel Islands are found at the northern end of the South China Sea. Claimed by both China and Vietnam, the Chinese defeated the Vietnamese at the Battle of the Paracel Islands on January 19, 1974. Although only seventy-one died in the battle, China argues it won control of the islands and that Vietnam should drop its territorial claims.

The claims of the Philippines are drawn from the 200-mile EEZ concept and obviously overlap with China’s map. All of these islands have been uninhabited but they can serve as bases and more importantly mark territories with hydrocarbon, mineral, and fishing resources. Here is a good BBC review of some of the conflicting claims.

The Spratly Islands are among the most contested in the South China Sea. Although composed of fourteen islands, islets, and kays, the Spratlys are also home to hundreds of reefs. Reefs are underwater bars of sand, rock, or coral; and some of these have been the building blocks for China’s so-called artificial islands, which are being built as military outposts -- including an airstrip -- on what they consider Chinese territory.

Chinese and Vietnamese lands are over 400 miles away from the Spratly Islands, yet both have historical claims on the area. Much closer to the islands are Malaysia and the Philippines. Both have airstrips as well on particular islands within the chain.They make their claims from the 200-mile law.  See the map below to better understand the various territorial claims and see where airstrips within the Spratly Islands are located. 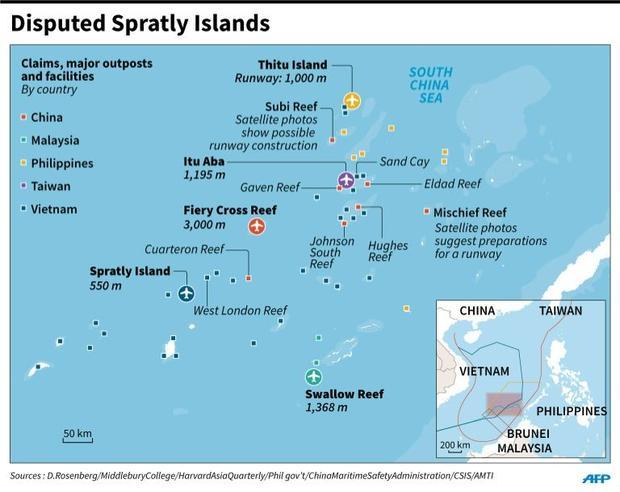