Map on Monday: TERRITORIAL ORGANIZATION OF THE CHURCH


by A. Joseph Lynch 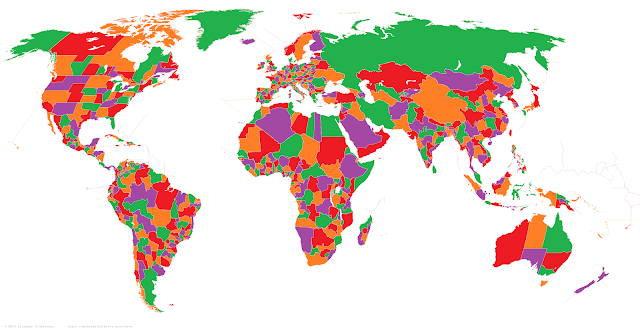 At the Ascension, Christ commanded the Apostles to go and make disciples of all nations. The map above displays the fruits of 2,000 years of apostolic labors. Many missionary-oriented churches or movements have world maps with small dots representing mission territories. The world map above shows the territorial organization of the Catholic Church by neither dots nor dioceses, but by provinces.

For those unfamiliar with ecclesiastical provinces, the Church organizes groups of dioceses together as a province with an archdiocese playing a leading role in the province. Some archdiocesan sees have a significant enough Catholic population to merit its archbishop to be elevated as a cardinal. A quick glance at the map reveals that the provinces and dioceses of the Catholic Church respect and reflect national territorial boundaries -- certainly in keeping with Christ's command to baptize the nations.

Judging by the map the larger the province, the smaller the overall numbers of Catholics in its region. Areas with many small provinces, on the other hand, generally reflect larger numbers of Catholics. Regions outside Europe that indicate high Catholic populations include Mexico and coastal South America, the west coast of Africa, and south and east Asia. Compare the Philippines -- a smorgasbord of small but highly populated provinces -- to the United States. The Philippines is home to over 80 million Catholics whereas 66 million Catholics are spread across the geographically larger United States. 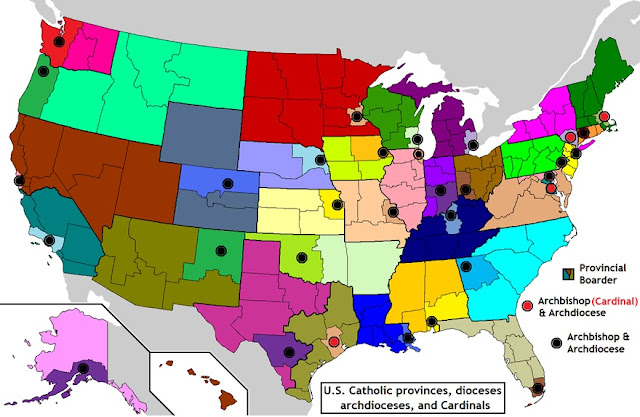 As an example of a provincial map that also displays dioceses and archdioceses, the above map shows the territorial organization of the Church in the United States. Notice the large, black dots represent an archdiocese and the large, red dots represent archdioceses whose archbishop is also a cardinal eligible to elect a pope. Regions with small Catholic populations - like the southeast - tend to form provinces that include dioceses across multiple states. Other provinces are organized along state lines, like Iowa and New York. Only two states in the U.S. - Texas and California - are broken into more than one province. Provinces are named after its sole archdiocese. The province encapsulating Missouri, for example, is called the Province of St. Louis. 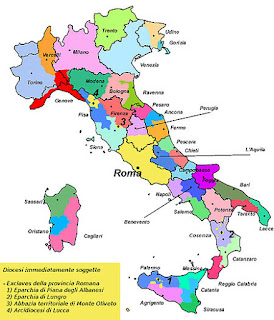 This final map (see right) is a provincial map of Italy. Pope Francis is not just a leader of the global Church, his first title is Bishop of Rome. The Diocese of Rome encompasses 340 square miles and is administratively subdivided between the Vatican and the city of Rome itself. Two vicars general - one for the Vatican and one for the city - oversee day-to-day affairs.They are assisted by 1,219 diocesan priests, 2,331 priests from outside the diocese, and over 5,000 religious priests. Rome is also home to 2,266 women religious.

Rome is also the leading diocese of the Province of Rome. The province is comprised of seven suburbicarian dioceses, located around the city of Rome. Cardinal-bishops, the highest rank within the cardinalate, are the titular heads of these dioceses. In addition to these seven, ten dioceses throughout the province look to Rome as their metropolitan see.

The apostolic work of baptizing the nations continues to this day, but the maps above reveal the fruits of the apostolic labors in terms of global territorial organization.