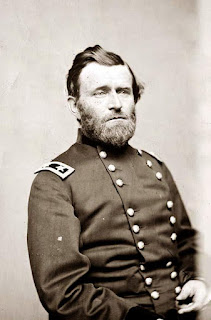 General David Petraeus was recently asked what historical figure he would most like to have dinner with. His answer: U.S. Grant.


"In my view, Grant stands alone among American military leaders as hugely impressive at all three levels of war: tactically (as shown in his capture of Forts Henry and Donelson in Tennessee early in the war); operationally (the Vicksburg victory in 1863, one of the greatest operational-level campaigns of all time); and strategically (devising and overseeing the first truly comprehensive strategy for the Union forces to defeat Robert E. Lee’s Confederate Army)...

For me, Grant was always captured best in the pithy response he offered to Gen. William Tecumseh Sherman, his most trusted commander, after the nearly disastrous first day of the Battle of Shiloh in 1862, when Grant’s army was almost pushed back into the Tennessee River. Sherman had emerged from the darkness to encounter Grant sitting under a tree with the rain dripping off his slouch hat.

'Yep,' Grant replied, taking a soggy cigar out of his mouth. 'Lick ‘em tomorrow, though.'

And he and his army did just that – all the way to Appomattox." 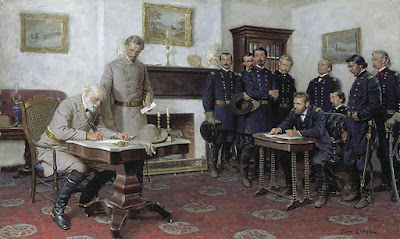 UPDATE --
The historian Phil Leigh writes: "After Lincoln’s assassination, radical Republicans urged that Robert E. Lee be tried for treason, thereby potentially starting a wave of executions. General Grant ended the matter by telling President Andrew Johnson he would resign if the surrender at Appomattox, which included de-facto amnesty for Lee and his soldiers, were not honored."

Here is our review of Bruce Catton's book on Appomattox.

Check out this "History in Five" video with biographer Jean Smith.
[Scroll down to find it].