Map on Monday: The Spanish and Portuguese Empires 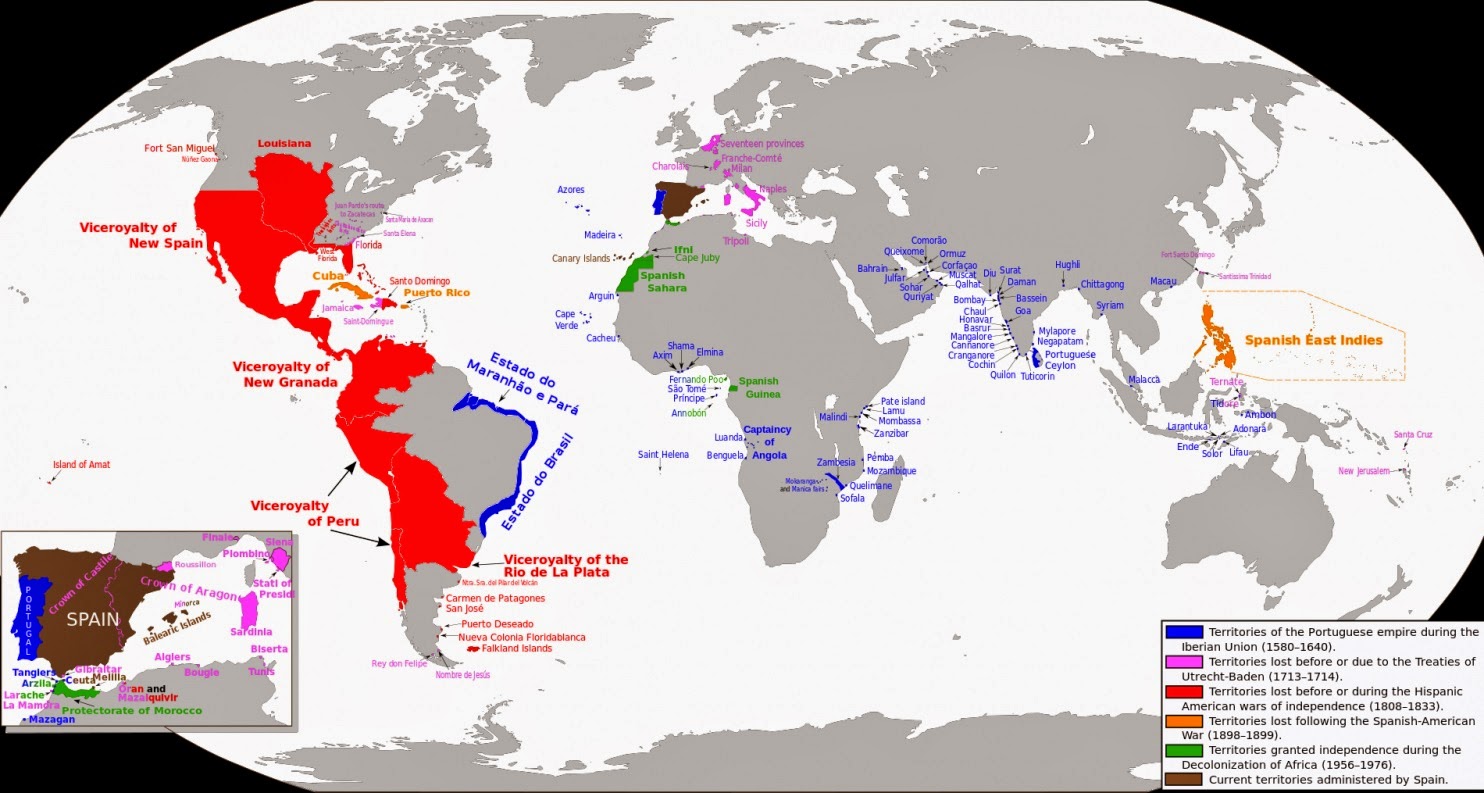 The map above (click to enlarge) depicts the vast reach of the Spanish and Portuguese Empires at their heights, and the time periods at which each portion of their realms gained independence. The map reveals some differences in strategic outlook between the two empires. While the Spanish sought to move inland and plant the Spanish flag (and faith) in new territory, the coastal nation of Portugal tended to retain its colonial lands and outposts along the coasts of South America, Africa, and Asia. Here we see the Spanish as a landed empire and the Portuguese as a maritime empire. Nevertheless Portugal gave South America its largest nation, Brazil, and bestowed on it the Portuguese language.

Another feature that stands out is the independence of much of Latin America prior to the active colonial divisions of Africa. Long before European nations began entering the African hinterlands, nations such as Venezuela, Colombia, Ecuador, Argentina, Uruguay, Paraguay, Chile, Peru, Brazil, and Bolivia had gained their independence.

The Portuguese and Spanish were two very different cultures but they were also deeply united by their common Catholic faith. Their robust military and imperial character was forged in the experience of expelling the Muslims from their rule on the Iberian peninsula. Portugal and Spain  helped return Christianity to its character as a global faith. From the Americas to Africa, from the Arabian Sea to the Pacific Ocean, missionaries brought the Faith to lands across wide oceans and over harsh lands. It was from the Spanish and Portuguese Empires that Christian nations were forged. One Asian example of this is the Philippines -- Asia's largest Christian nation. It is no small fact that the immigrants who come to the United States across our southern border share with us the Christian faith. We meet them in our churches. The Europeans undergo a very different experience when their southern neighbors enter their lands. To paraphrase Philip Jenkins: immigration from the south transforms the US from a Christian country into a more Christian country. We can thank the Spanish and Portuguese for that.

May the global Catholic nations awaken, and may our Christian nation awaken as well to our shared brotherhood. One Church, many nations.

This post originally appeared on Anthropology of Accord on December 1, 2014.
Posted by Andrew Lynch at 6:00 AM