In our pre-Election Day Map on Monday article, we identified the Blue Wall states where Democrats had won the previous six presidential elections along with the red Mitt Romney states which Donald Trump needed if he stood any chance of winning.

As things turned out, President-elect Trump held on to all the red Romney states while tearing down the Blue Wall across the Rust Belt. This came as quite the surprise to pollsters like Larry Sabato (and his famed "Crystal Ball") who projected a Clinton blowout of 322 votes to Trump's 216. Our map above shows the likely electoral finish as 306 votes for Trump and 232 votes for Clinton. The election was indeed a blowout - just not quite as expected.

Readers of our previous article may recall we noted that Trump's flipping of Ohio and Florida still put him sixteen votes away from a tie and seventeen votes away from a win. In our examination of the map, we thought it most likely for Trump to get his final sixteen votes from the states of Iowa (6), Nevada (6), and New Hampshire (4). Had this been the case, however, Trump would have lost since Nevada and New Hampshire did hold for Clinton. Iowa alone put him ten votes shy. Then came the avalanche no one expected. The utter collapse of the Blue Wall in the Rust Belt states of Wisconsin, Michigan, and Pennsylvania - liberal bastions that have stood for years - made Nevada and New Hampshire unnecessary.

The stunning Rust Belt result can partially be explained by the raw numbers. Of the three states only Pennsylvania had a higher voter turnout than that of 2012 - and the lower turn out surely helped Trump. In all three states Trump out-performed Romney; and Clinton far under-performed Obama (by margins of about 150,000-300,000 votes). The story is also told by the counties nationwide that Trump flipped from Obama's elections. Of the 676 counties that voted for Obama twice, Trump managed to flip 209 - but of the 207 counties that voted for Obama once (in either 2008 or 2012), Trump turned 194. Clinton on the other hand struggled to flip a mere 6 counties of the 2,200 counties Obama failed to win.


The map below gives further evidence of this by displaying the Romney-Trump performance (right) and the Obama-Clinton performance (left): 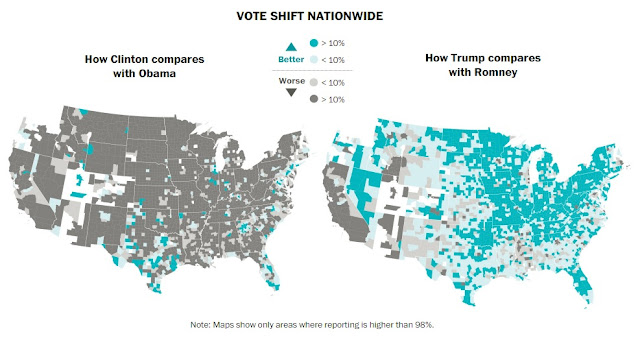 Another county-by-county comparison can be made between how Bush did in 2004 to how Trump did in 2016. The map looked pretty red in 2004 - but Trump has made it much redder.

President-elect Donald Trump flipped the election - and the electoral map - on its head. However things go from here, Donald Trump has changed the political landscape of this country both literally and figuratively.
Posted by A. Joseph Lynch at 6:00 AM