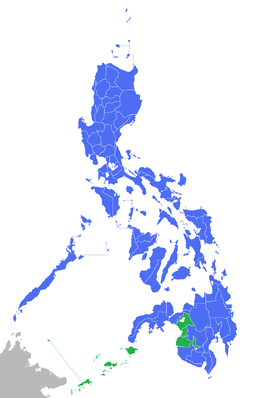 Today with a population of one hundred million people across seven thousand islands, the Philippines is the seventh most-populous nation in Asia and the twelfth most-populous nation in the world. Of its one hundred million citizens, around 80% are Catholic, 9% are Protestant, and 11% are Sunni Muslim. The green areas in the map to the right represents the majority Muslim regions of Mindanao, Palawan, and the Sulu Archipelago. Called the Moro (from the Spanish for Moors), Sunni Muslims in the Philippines seek to establish an independent province called Bangsamoro (roughly translated as the Nation of the Moors).

The scattered islands which comprise the nation make for a diversity of ethnic groups and languages. While Filipino and English are the nation's two official languages, the Philippines recognizes nineteen regional languages. Of its many ethnic groups, 75% of the nation's population are either Tagalog (28.1%), Cebuano (13.1%), Ilocano (9%), Bisaya (7.6%), Ilonggo (7.5%), Bicolano (6 %), or Waray (3.4%).

In 2016, Rodrigo Duterte, the law-and-order mayor of Davao City, was elected president of the Philippines on the campaign promise of fighting drug dealing. 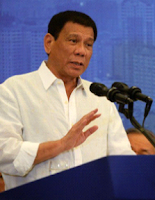 Duterte is a tough-talking, no-nonsense nationalist who fits in well with the rise of strong male leaders across much of the globe.

Duterte was sexually abused by the Jesuit, Fr. Mark Falvey (who with his brother raped boys in California during the 60s and 70s. Between the two, the Church in Los Angeles and Sacramento has paid millions in settlement claims). He has had a stormy relationship with the Philippine hierarchy and advocates a much more punitive approach to justice than the bishops.

Since his election as president, Duterte has cracked down on drug dealing and reoriented itself away from the United States, seeking closer ties with China and a peaceful resolution to their territorial dispute in the South China Sea.


Stratfor Video on the Geographic Challenges for the Philippines

Stratfor - short for Strategic Forecasting, Inc. - is a private global intelligence company that offers geopolitical insight into the interplay of nations. Stratfor has developed an excellent series of short (~2-4 minute) videos which provide the viewer with a specific nation, along with its basic history, geography, culture, and geopolitical allies and adversaries. In the following video, they present the geographic challenges facing the Philippines. Pope Francis' January 2014 trip to the Philippines drew together a record-setting estimated 6-7 million Catholics for Mass.

This article originally appeared on Anthropology of Accord on January 19, 2015.
Posted by Andrew Lynch at 6:00 AM

Email ThisBlogThis!Share to TwitterShare to FacebookShare to Pinterest
Labels: Map on Monday, Physical Ecology, Profiles of the Nations