Christian Realism: Christianity and Civilization, NOT the West against the Rest 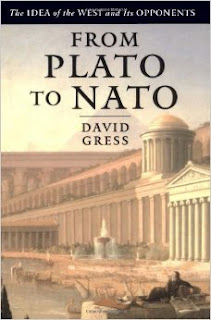 Mankind is engaged in a continual struggle to live in ordered communities under God. The spread of Christianity nourished the 18th and 19th century epiphany of nations leading to Woodrow Wilson’s 20th century advocacy for the self-determination of all peoples and nations against empire, tyranny, and the disorder of statelessness. History has a direction and a Director. There are certain forms which manifest the deepest communal order of the Trinity and build toward the culminating communal order of humanity as the Body of Christ. Every people and nation has some role to play in this unfolding of Providence. We have argued that Christian intellectuals and American foreign policy must free themselves from the lifeless paradigm of the West as a larger entity that we should defend. We don’t accept the temporal scheme that names the century which crowned Reason the sovereign over religion as an age of "Enlightenment." Nor do we advocate the spatial shrinking of worldwide Christendom and the erasure of particular nations in some entity called "the West." One of our favorite critiques of the "Grand Narrative of the West" was Plato to Nato by David Gress published in 1998. He critiques the post-WWII narrative of the West as distorting the earlier narrative (what he calls the 'Old West') which synthesized the Christian religion and the free tradition of German warriors. The university professors who crafted the post-WWII narrative of the West had little time for serious religion. and no time for Germanic warriors in their new tale. Greek philosophers and intellectuals replaced the priest/warrior archetypes of the old synthesis. Andrew Lynch reviews the book here. A few excerpts:


Gress writes: “The liberal Grand Narrative produced a Western identity that was modern, secular, and liberal and that rested on an imaginary direct line connecting the modern West to the ancient Greeks, an imaginary line from Plato to NATO, in which everything in between formed an orderly sequence culminating in liberal modernity.”

Gress laments the derivative way in which the Grand Narrative treated religion, valuable only insofar as it spoke in favor of human dignity, rights, and equality. If Christianity were given any positive treatment, it would only be insofar as it supported the soft virtues of kindness and generosity and defending the rights of individuals. Proponents of the Grand Narrative generally treated religion as a hindrance to progress and therefore could not see Christianity’s contribution to the work of the Greeks and Romans.

If Christianity was overlooked in the Grand Narrative, the Germanic contribution to the “Old Western Synthesis” has been forgotten altogether. For Gress, “the West” is “truly defined” by “the ancient philosopher, the Christian priest, and the Germanic warrior.” The Germanic contribution to “the West” was popular for many years, especially among the WASPs. It was even held by some that the Germano-Aryan-Caucasian warrior must have comprised the majority of Greeks and Romans and that marriages with “lesser races” brought about a loss of martial vigor and decline. The early Grand Narrative also cited Roman historian Tacitus, who wrote that the German chief and his warriors would gather in grand assemblies to discuss and vote on important matters. Thus from the Germans came both the strong warrior and the democratic statesman.