Pacem in Terris: Pope John XXIII on Order and Peace


[
In a speech recalling Pope John XXIII's Pacem in Terris (April 1963), Russell Hittinger listed several salient points in the notes which the good Pope John gave one of the drafters of the encyclical:

1) Peace is the tranquility of order
2) Order is obedient fidelity to the Eternal Law
3) Order is giving each thing its rightful place – in home, city, and man
4) Wretched is the People alienated from God

Christopher Dawson – in his Judgment of Nations, written during the Second World War before the founding of the UN – gave similar advice.  He warned that the next confederation of nations (unlike the League of Nations) should not attempt to include all nations, but rather, must be built on a spiritual basis of union. We got instead the United Nations which granted almost all existing States sovereignty, and awarded Security Council seats to the winners of the war. Catholics cannot invoke Christian principles in domestic pro-life or pro-immigrant policies, and then treat foreign affairs as if God does not exist. 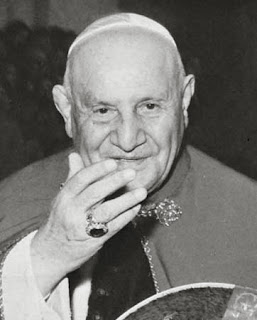 The future Pope John was in Turkey during World War II, thinking of the role of a bishop to articulate a view of history that was "supra-nationalist." He made a note to himself to re-read Augustine. Why?

Because the great saint of Hippo in northern Africa made sense of the world for his flock in a troubled time. He knew that a bishop had a duty to view the comings and goings of the nations, and discern the “signs of the times.”  Augustine (who died in his mid-seventies in the year 430) gave his people an explanatory philosophy of history… a man in full who knew his duty as a bearer of Christ.


A lengthy article by Professor Hittinger on the subject can be found here.