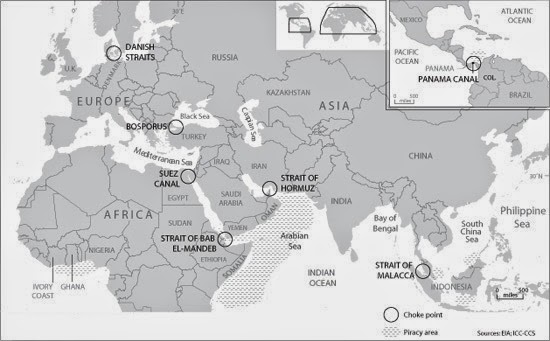 71% of the world's surface is covered by water. The map above depicts seven geostrategic choke points along waterways that are vital links for commerce and military seafaring. Controlling access to waterways in war and peace often involves attacking or defending these chokepoints.

Despite being thousands of miles from Europe, the Strait of Malacca, for example, has been significant for European powers dating back to the Portuguese and British. The Japanese naturally sought control of the strait in December 1941. Russia looks to the Danish Straits in its north and the Bosporus to its south for its fleets from St. Petersburg and Crimea to access the open waters. Fleets from the Crimea still have to pass through either the Suez Canal and the Strait of Bab El-Mandeb if they wish to reach the Arabian Sea or through the umarked Strait of Gibraltar to enter the Atlantic. About 35% of the world's shipped oil passes through the Strait of Hormuz, making it a vital choke point for many nations' energy demands. Any conflicts between Sunni (Saudi Arabia) and Shia (Iran) will have that narrow seaway as a major military concern. Finally, the Panama Canal allows shipping to cross through central America rather than around the southern tip of South America. The canal is a vital point of communication and military sea transport for the United States Navy.