Excerpts from a 1958 review by Irving Howe:

Doctor Zhivago, the novel which climaxes the career of the Russian poet Boris Pasternak [died in 1960], is a major work of fiction; but it is also—and for the moment, perhaps more important—a historic utterance...

The book comes to us in extraordinary circumstances. A great Russian poet who maintains silence through years of terror and somehow, for reasons no one quite understands, survives the purges that destroy his most gifted colleagues; a manuscript sent by him to an Italian Communist publisher who decides to issue it despite strong pressures from his comrades; the dictatorship meanwhile refusing to permit this book, surely the most distinguished Russian novel of our time, to appear in print—all this comprises the very stuff of history, a reenactment of those rhythms of brutality and resistance which form the substance of the novel itself.

Doctor Zhivago opens in the first years of the century, spans the revolution, civil war and terror of the thirties, and ends with an epilogue in the mid-1940s. On a level far deeper than politics and with a strength and purity that must remove all doubts, it persuades us that the yearning for freedom remains indestructible. Quietly and resolutely Pasternak speaks for the sanctity of human life, turning to those "eternal questions" which made the 19th Century Russian novel so magnificent...

[Pasternak] has turned back to the old-fashioned leisurely Tolstoyan novel. His aim is not to mimic its external amplitude, as do most Soviet writers, but to recapture its spirit of freedom and then bring this spirit to bear upon contemporary Russian life... 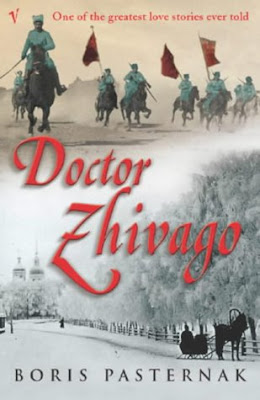 Yuri Zhivago [is] the central figure of the novel and in some ways Pasternak's alter ego... As he is driven from the battlefields of the First World War to revolutionary Moscow to partisan fighting in Siberia, and then back again to Moscow, Zhivago tries to keep hold of a few realities: nature, art, the life of contemplation. No matter how desperate the moment may be, he feels that the preservation of his inner identity is still possible if he can watch a cow grazing in the fields, read Pushkin's poems and speak freely to himself in the journal he intermittently keeps.

It is this effort to preserve the personal basis of reality which forms the main stress of Zhivago's experience—an effort always secured in a radiantly intense feeling for nature. One of the loveliest episodes in the novel occurs when Zhivago and his family, to avoid starvation during the civil war, decide to leave Moscow. They take a long journey eastward, and at one point their train becomes stalled in drifts of snow. For three days the passengers work in the open, helping to clear the tracks. A light of joy comes over them, a feeling of gratification for this gift: "The days were dear and frosty, and the shifts were short because there were not enough shovels. It was sheer pleasure."

Somewhat earlier in the book Zhivago reflects upon his life while traveling homeward from the First World War:


'Three years of changes, moves, uncertainties, upheavals; the war, the revolution; scenes of destruction, scenes of death, shelling, blown-up bridges, fires, ruins—all this suddenly turned into a huge, empty, meaningless space. The first real event since the long interruption was this trip . . . the fact that he was approaching his home, which was intact, which still existed, and in which every stone was dear to him. This was real life, meaningful experience, the actual goal of all guests, this was what art aimed at—homecoming, return to one's family, to oneself, to true existence.'


... Zhivago's opinions reflect the direction of Pasternak's yearning, the long-suppressed bias of his mind; but there is, in the novel itself, more than enough counter-weight of objective presentation. Pasternak is extremely skillful at making us aware of vast historical forces rumbling behind the lives of his central figures. The Bolshevik revolution is never pictured frontally, but a series of incidents, some of them no more than a page or two in length, keep the sense of catastrophe and upheaval constantly before us—Zhivago fumbling to light an old stove during an icy Moscow winter while in the nearby streets men are shooting at each other, a callow young Menshevik "heartening" Russian troops with democratic rhetoric and meeting an ungainly death as his reward, a veteran Social Revolutionary pouring bile over the Communist leaders, a partisan commander in Siberia fighting desperately against the White armies. And as Zhivago finds himself caught up by social currents too strong for any man to resist, we remember once again Tolstoy's concern with the relationship between historical event and personal life.

Once Pasternak reaches the revolutionary period, the novel becomes a kind of spiritual biography, still rich in social references but primarily the record of a mind struggling for survival. What now matters most is the personal fate of Zhivago and his relationships with two other characters, Lara, the woman who is to be the love of his life, and Strelnikov, a partisan leader who exemplifies all of the ruthless revolutionary will that Zhivago lacks.

Zhivago himself may be seen as representative of those Russian intellectuals who accepted the revolution but were never absorbed into the Communist apparatus. That he is both a skillful doctor and a sensitive poet strengthens one's impression that Pasternak means him to be something more than an individual figure. He speaks for those writers, artists and scientists who have been consigned to a state of permanent inferiority because they do not belong to the “vanguard” party. His sufferings are their sufferings, and his gradual estrangement from the regime, an estrangement that has little to do with politics, may well be shared by at least some of them. Zhivago embodies that which, in Pasternak’s view, man is forbidden to give to the state...


The novel reaches a climax of exaltation with a section of some twenty pages that seem to me one of the greatest pieces of imaginative prose written in our time. Zhivago and Lara, who have been living in a Siberian town during the period of War Communism, begin to sense that their arrest is imminent: not because they speak any words of sedition (Zhivago has, in fact, recently returned from a period of enforced service as doctor to a band of Red partisans) but simply because they ignore the slogans of the moment and choose their own path in life. They decide to run off to Varykino, an abandoned farm, where they may find a few moments of freedom and peace. Zhivago speaks:


'But about Varykino. To go to that wilderness in winter, without food, without strength or hope—it's utter madness. But why not, my love! Let's be mad, if there is nothing but madness left to us. . . .

'Our days are really numbered. So at least let us take advantage of them in our own way. Let us use them up saying goodbye to life. . . . We'll say goodbye to everything we hold dear, to the way we look at things, to the way we've dreamed of living and to what our conscience has taught us. . . .We'll speak to one another once again the secret words we speak at night, great and pacific like the name of the Asian ocean.'


From this point on, the prose soars to a severe and tragic gravity; every detail of life takes on the tokens of sanctity; and while reading these pages, one feels that one is witnessing a terrible apocalypse.  Begun as a portrait of Russia, the novel ends as a love story told with the force and purity of the greatest Russian fiction; yet its dependence upon the sense of history remains decisive to the very last page.

Through a ruse Zhivago persuades Lara to escape, and then he returns to Moscow. He falls into shabbiness, illness and long periods of lassitude; he dies obscurely, from a heart attack on the streets of Moscow. Lara's fate is given in a fierce, laconic paragraph:


'One day [she] went out and did not come back. She must have been arrested in the street at that time. She vanished without a trace and probably died somewhere, forgotten as a nameless number on a list that afterwards got mislaid, in one of the innumerable mixed or women's concentration camps in the north.'


Like the best contemporary writers in the West, Pasternak rests his final hope on the idea that a good life constitutes a decisive example. People remember Zhivago. His half-brother, a mysterious power in the regime who ends as a general in the war, has always helped Zhivago in the past; now he gathers up Zhivago's poems and prints them; apparently he is meant to suggest a hope that there remain a few men at the top of the Russian hierarchy who are accessible to moral claims. Other old friends, meeting at a time when "the relief and freedom expected at the end of the war" had not come but when "the portents of freedom filled the air," find that "this freedom of the soul was already there, as if that very evening the future had tangibly moved into the streets below them."

So the book ends—a book of truth and courage and beauty, a work of art toward which one's final response is nothing less than a feeling of reverence.

UPDATE: The 1965 production, directed by David Lean, is one of the great films of all time.

One of the reasons was the supporting actors such as Tom Courtenay (above), who played Strelnikov; and Rod Steiger as the evil Komarovsky, a well-connected Moscow lawyer.

Take a few minutes to ponder these words of Fulton Sheen as you listen to some Russian liturgical chant:


"The lesson is not to be forgotten: in a not too distant day when Russia, like the prodigal son, will return to the father’s house, let not Western civilization refuse to accept it back or absent itself from the feast celebrating the salvation of what was lost."