Pro-life Professionals Jump on Trump: Why He Had to be Punished


Like the clever scribe in the Gospels, MSNBC host Chris Matthews set out to trap the man stirring up the city. He put before him a woman caught in abortion. "What shall her punishment be?" he asked again and again. Mr. Trump, again and again, said, “I do not know.” Finally, Mr. Matthews said, “Do you believe in punishment for abortion, yes or no, as a principle?” Mr. Trump said, “The answer is yes -- there has to be some form of punishment.” Matthews had his headline. In the subsequent exchange, Mr. Trump then pressed him about his pro-abortion Catholicism in a way we have never seen from a Republican candidate in the past. (Video.  Transcript.)

Mr. Trump was asking an honest question. He didn’t know the answer. What Mr. Matthews knew about his church or human life isn’t clear. If he thinks that human life is a thing of Caesar, it is understandable that he didn’t want to be queried about his religion.

One might think pro-life Catholics would have a field day with Matthews on the ropes, but their ire was saved for Mr. Trump. The official Catholic Republican public intellectuals and pro-life professionals heaped thundering shame on the amateur newcomer to their club. Princeton’s Robert George said, "We know that we don't need to punish mothers to save babies. What Mr. Trump has succeeded in showing pro-life Americans is that he is not one of us."

Matthew Archbold of the National Catholic Register wrote: "Mr. Trump, please stop talking about abortion, at least until you've talked to experts and done some research." He then showed the amateur pro-lifer how a "pro" answers such questions:


Here's how a pro like Marjorie Dannenfelser, president of the national pro-life group Susan B. Anthony List, handles it:

'Mattie Brinkerhoff, a leader of the women’s suffrage movement, said that when a woman undergoes an abortion it is evidence she has been "greatly wronged." The Revolution, the newspaper owned and operated by Susan B. Anthony published an op-ed asserting that, on abortion, 'thrice guilty is he who, for selfish gratification, heedless of her prayers, indifferent to her fate, drove her to the desperation which impels her to the crime.'

Ms. Dannenfelser spoke for all the pros in reminding us amateur pro-lifers that women who procure abortions are victims. Mr. Trump didn’t get the memo: "Never blame the victim."

There had not been such unanimity in the consultant class since 100 Republican foreign policy specialists disavowed Mr. Trump’s fitness for the presidency. His sin in that arena was suggesting the US should ally with nuclear-armed Christian Russia,and focus on salafist Sunnis in Saudi Arabia and Pakistan as the true enemies of America and Mideast Christians.

Let us remember, his transgression on the abortion issue is answering "philosophically" that some form of punishment should follow a woman aborting her child.

How right he was. Certainly it is the truth that a great punishment follows every abortion. Her child is dead. Anyone who does not warn a woman before, or understand her guilt after, fails the woman both as a mother and a moral agent. It is the great horror of abortion that the most sacred place of protection becomes a killing field at the consent of the protector. If Christ turned a tomb into a birthplace, abortion turns a sanctuary into a tomb. It is the ultimate act of domestic violence. But because it is more like a suicide than a holocaust, states have legislated more to prevent than to punish.

When sanctity-of-life professional Ms. D quoted the 1869 newspaper blaming the "thrice guilty" men involved in abortion, she left out the line which preceded it: "... the woman is awfully guilty who commits the deed. It will burden her conscience in life, it will burden her soul in death..." The old feminists knew what the modern feminists cannot face: for the woman there would be a terrible punishment, and it would last a lifetime. 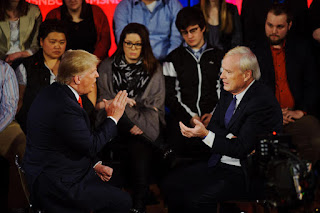 Mr. Trump asked the Catholic, Mr. Matthews, quite sincerely about the Church punishment for abortion. Mr. Matthews was silent; while Bethany Goodman of the largely Catholic March for Life titled her anti-Trump article: "No Pro-life American Advocates Punishment for Abortion." She and Mr. Matthews might want to call a local bishop on that one, since the Catholic Church reserves its most severe punishment for abortion: excommunication. This ban from participation in the life of the Church can only be lifted by a bishop in the Church -- not your local parish priest. During the Year of Mercy, Pope Francis has extended the power to lift the excommunication ban to all parish priests. The penalty (yes, that is a punishment) for abortion has not been waived. The doors to forgiveness have been multiplied. Would all the pro-life feminists and professors contend that the Catholic Church is not part of their official club because the Church explicitly has a punishment directed at any woman who procures an abortion?

The official pro-life establishment -- along with Fox News journalists and most of the GOP -- have been cowed for years by the feminist ideology that has given us abortion for a fifth of all American pregnancies. They have been silent as the masculine protective culture of our military and State Department have been feminized. The talking heads have never been able to say that a woman seeking an abortion is like a soldier deserting his post. It is a shameful act springing from the two great perversions of the sexual revolution. The sexual act was torn out of marriage; and the adult protective duties of men as soldiers, and women as mothers, were divorced from sexual identities.

A culture of life is a culture of protection. The Republican consultant class has missed this for several decades. Mr. Trump, in personality and program, is assembling a brotherhood of nationalists to fight our real enemies. He practices the ancient politics of protection. He sounds no demand for individual rights. His gatherings are public manifestations of shared loyalties shaped by common duties.  New masculine personalities are coming to the front. They are moved more by love of country than career. They act in large groups, not power couples. Mothers will come to recognize this and support the adult movement to protect. The protective movement will include fighting our enemies abroad and shielding our babies at home. Mr. Trump’s boisterous assembling of the nation doesn’t look like the pinched consultant world of 'metro males' and feminist careerists -- he had to be punished.