THE POPE’S MESSAGE TO THE WORLD AND MUSLIMS: Bringing several Muslim refugee families from Syria to Rome with him (where a Christian community will take them in) was the Pope’s dramatic and orderly way of sending the Christian message. God does have companions, and we who are made in His image are also the companions to those who have lost their homes.

THE POPE AND CONSERVATIVE CATHOLIC INTELLECTUALS - CHARITY DOES NOT ABIDE: Alan Jacobs (a non-Catholic) concludes from the outside that for many "orthodox Catholics" Pope Francis will never get it right. He doesn't blame the Pope. There seems to be an adolescent inability of academics to show respect (much less piety) toward the men who hold or compete for positions of authority in civic and religious life. That seems true of the pristine critics of "not Catholic enough" Pope Francis, and the effete and stringent pro-life academics who shriek at the more blatantly imperfect Mr. Trump.

POPE FRANCIS AND CHINA - GETTING IT RIGHT: A good explanation of the Pope's approach to China at Foreign Affairs by Victor Gaetan.

SANDERS AND THE POPE: Bernie Sanders went to the Vatican for a conference on Centissimus Annum. Senator Sanders favors a lot in Catholic teaching that is "much more left than right," no doubt. Sanders' lifelong ideological commitment to socialism is deeply atheistic. His concept of human dignity denies the human soul and demonizes the wealthy. That is a problem. On the other hand, he is genuinely taken with the Pope and even spoke of the human soul in later remarks.

A Brief Meeting Outside the Breakfast Room (FROM ROBERT MOYNIHAN LETTER #31 INSIDE VATICAN):

It happened at about 6 a.m. this morning, outside the dining room of the Domus Santa Marta, where the Pope lives, and it lasted for "about five minutes," one onlooker said.

Pope Francis met Bernie Sanders and his wife, Jane, briefly this morning outside the breakfast room of the Domus Santa Marta, where the Pope lives.

Bernie and his wife Janet had both been invited to be guests for the night in the Domus.

They reportedly stayed on the same floor as the Pope.

The two were seen in the reception area, carrying their own bags.

Sanders advisor Prof. Jeffrey Sachs, also a guest in the Domus for the night -- he frequently stays in the Domus when he attends conferences of the Holy See's Pontifical Academy for Social Sciences, where Bernie gave his 10-minute talk yesterday afternoon -- was also present nearby, and estimated that the meeting lasted "for five minutes."

There are no photos of the meeting.

"We had an opportunity to meet with him this morning," Sanders told Ken Thomas of the Associated Press later in the morning. "It was a real honor for me, for my wife and I to spend some time with him. I think he is one of the extraordinary figures not only in the world today but in modern world history."

Sanders said it was a brief meeting. "I told him that I was incredibly appreciative of the incredible role that he is playing in this planet in discussing issues about the need for an economy based on morality, not greed.”

Robert Royal at The Catholic Thing is not happy with Socialism at the Vatican. 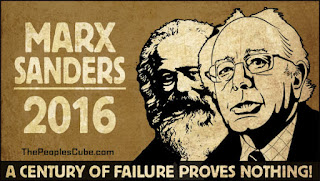 THE SAUDIS, ISRAEL, AND EGYPT:  Israel was in on the transfer of islands - watch the choke points.

IF YOU CAN'T RUN FOR PRESIDENT - BE A SENATOR AND SAVE US FROM THE SAUDIS: Senator Rand Paul and Democrat Chris Murphy join to start putting limits on the Saudi arms bazaar. This is one way to begin disengaging ourselves from the religious persecution of Yemen's Shiiites and begin a true reappraisal of our alliance with the Wahabbis.

More good news from the Senate - Al Franken and Ted Cruz on the same side of an important initiative against the Kingdom.

SAUDI ARABIA AND THE MUSLIM BROTHERHOOD: While Wahhabi-led Saudi Arabia and the Muslim Brotherhood share an "Islamist" outlook, there are several essential differences between them that made them rivals. The Muslim Brotherhood is much less kin and tribe-oriented, allowing many more men social recognition and opportunities for leadership. The MB has an emphasis on Jerusalem as a Holy City rivaling Mecca. The MB is willing to make alliances with non-Muslim groups in order to create states in which they are free to pray and teach. This article is an invaluable historical explanation of this important divide in the Sunni world.

THINKING THEOLOGICALLY ABOUT THE LAND OF ISRAEL AND THE THEOLOGICAL IMPORT OF TERRITORIAL CIVIC BONDS: From the new Providence magazine (devoted to Christianity and American foreign policy), an article on A new Christian Zionism:


The Land continued to be at the heart of the biblical story: “Of all the promises made to the patriarchs it was that of the land that was the most prominent and decisive.”[viii] Elmer Martens estimated that eretz (land) is the fourth most frequent noun or substantive in the Hebrew Bible, and is more dominant statistically than the covenant.[ix] By my own counting, the eretz of Israel is either directly referred to or implied more than one thousand times in Tanakh, the canon of the Hebrew Bible. Of the 250 times that covenant (b’rit) is mentioned, in 70% of those instances, 177 times, covenant is either directly or indirectly connected to the land of Israel. Of the 74 times that b’rit appears in Torah, 73% of those times, or 54, include the gift of the land, either explicitly or implicitly. According to the Dictionary of Biblical Imagery, “Next to God himself, the longing for land dominates all others [in the Hebrew Bible].”[x] In other words, when the biblical God calls out a people for himself, he does so in an earthy way, by making the gift of a particular land an integral aspect of that calling.

"SCIENCE" TAKES A GUESS AT WHEN THE BIBLE WAS WRITTEN: This paper was published in a reputable scientific journal purporting to offer a possible dating for biblical texts based on literacy rates among Jews about 600 BC. From a few inscriptions, they deduce that five different people wrote them and posited that most forts had maybe 30 soldiers and, so, there was a high rate of literacy. Written texts need high literacy rates they tell us. (No one knows who made up that rule). Thus, one possible time of Bible authorship was 600 BC. This is called reasoning from empirical evidence. This is actually more coherent than some of the wild theories that can spring from discovering a broken shard in an old village site. If only theologians would look with a sense of humor and common sense at some of these "social science studies." They would not be so cowed by the conceits of Modern Science.

III. R&G ROUND UP: THE NATIONS

WHEN ALLIES (LEANING ON AMERICA) PICK FIGHTS WITH THEIR BIGGER NEIGHBORS: Pat Buchanan on dangers of war with entangling alliances. Why they endanger our future by precipitating possible wars and precluding new relationships with more significant actors.

CHINA, ASIAN NATIONS, AND THE SOUTH CHINA SEA: A review of the present alignment of forces.

POKING RUSSIA; POKING BACK: Build up in Baltic Sea by U.S. and saber rattling by Russia - A new policy desperately needed. Are they buzzing our ship or is our warship in the Baltic Sea menacing their port of Kaliningrad?

UNDERSTANDING RUSSIA: A critic of American Conservative writer Rod Dreher suggested to him that he did not understand Russia. Dreher often joins in the mainline criticism of Putin as a bully or thug. Mr. Dreher was intellectually honest enough to highlight these resources which his critic suggested.


1. "Casino Moscow" by Andrew Brezinski (Zbigniew Brzezinski's nephew who dropped a ‘z’ from his surname). It’s about his time as a reporter in Russia during the Yeltsin Era, where he saw upfront the insanity that accompanied the plundering of the country, including by Nemtsov.

2. "Godfather of the Kremlin – Boris Berezovsky and the looting of Russia" by Paul Klebnikov. Here you’ll learn about the building of the oligarchy during that era, and how men like Berezovsky used the Chechen Mafia to eliminate rivals through bombings and assassinations. Klebnikov, a writer for Forbes magazine, paid for this book with his life, as even the UK Telegraph accuses Berezovsky of ordering the hit.

EUROPEAN OFFICIAL REPENTS: Maybe it isn't all Islamophobia. The new German Right. Here are paragraphs about two thinkers who are replacing the guilt-ridden German post-WWII social consensus. The German nation will rise again. Will it be within a Christian sensibility? This will not happen if a concern for thymos and love of nation is left to a godless intellectual right. Germany has already lived that story. A major cultural problem is that so much of the paid Catholic hierarchy is besot with the gender ideology of feminism and homosexuality. The very large homosexual subculture among Catholic clergy is matched by the state-paid Lutherans, except they are open and flagrant in their profanation. For now, the young men in German streets looking for the nation as a sacred disciplined covenant will not find it among Church men.


AfD intellectual, Marc Jongen, who is a former assistant of the well-known philosopher Peter Sloterdijk. Jongen has not only warned about the danger of Germany’s “cultural self-annihilation”; he has also argued that, because of the cold war and the security umbrella provided by the US, Germans have been forgetful about the importance of the military, the police, warrior virtues—and, more generally, what the ancient Greeks called thymos (variously translated as spiritedness, pride, righteous indignation, a sense of what is one’s own, or rage), in contrast to eros and logos, love and reason. Germany, Jongen says, is currently “undersupplied” with thymos. Only the Japanese have even less of it—presumably because they also lived through postwar pacifism.

Sloterdijk has distanced himself from Jongen’s self-declared “avant-garde conservatism.” But the “psycho-political” perspective Jongen adopts is one of Sloterdijk’s philosophical trademarks. In his 2006 volume Rage and Time, in which he also takes his cues from Nietzsche, Sloterdijk argued that in the West thymos had been largely forgotten because of the dominance of eros in consumer capitalism, with the result that envy and resentment dominate the inner lives of citizens. He echoed Francis Fukuyama’s argument in his The End of History and the Last Man that pacified liberal democracies generally fail to find a proper place for “thymotic energies,” and Sloterdijk has said explicitly that, in confrontations with Islam, the West needs to rediscover the role of thymos. Just like Jongen, who criticizes the EU for being “post-thymotic.”

URUGUAY -- SOUTH AMERICA'S MOST SECULAR COUNTRY AND INDIANA UNIVERSITY -- CLUELESS ON THE KKK AND DOMINICANS: Mary in Uruguay. A Dominican on campus - why the white robe?