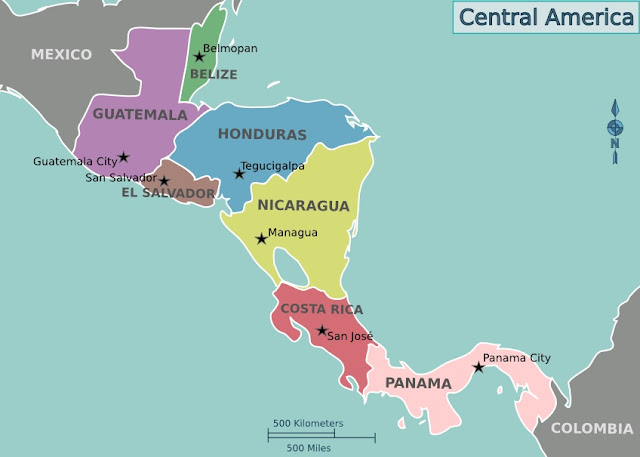 An Introduction to the Geography and History of Central America

Central America is comprised of seven Christian (mostly Catholic) nations: Belize (335,000), Costa Rica (4.7 million), El Salvador ( 6.1 million), Guatemala (14.4 million), Honduras (8.5 million), Nicaragua (5.8 million), and Panama (3.6 million). Today's Map on Monday, however, will consider Belize and the five nations that had been part of the Federal Republic of Central America. Panama, due to its strategic importance as well as its historic ties to the nation of Columbia and the short-lived republic of Gran Columbia, will be treated separately.

The geography of Central America is that of a tapering isthmus, running from the northwest at its widest to its narrowest point in the southeast. While the region shares land borders with Mexico and South America, most of Central America faces the ocean: the Pacific to the west and south, the Caribbean to the east and north, and the Gulf of Mexico further north. Central America also sits on what is called the Caribbean plate, which it shares with the island nations of Jamaica, Haiti, the Dominican Republic and the U.S. territory of Puerto Rico (Cuba sits on the North American Plate). Central America is also very mountainous with the Sierra Madre de Chiapas, the Cordillera Isabelia and the Cordillera de Talamanca as the three longest ranges in the region.

From 1523 to 1697, conquistadors brought the region under Spanish rule. In 1609, the area was given some autonomy in military and administrative affairs. Ruled by a governor-captain general, the region remained part of the Spanish Empire but was directed locally by a competent man with the crown's approval. Napoleon's intervention in Spanish affairs in Europe brought about independence movements in the region. On March 15, 1821, the region enacted the Act of Independence of Central America and spent the next two years as a member of the Mexican Empire. In 1823, it seceded from Mexico to form the Federal Republic of Central America, a representative democracy with its capital at Guatemala City. A lack of national identity eventually drove the region into civil war from 1838-1840 leading to the creation of five separate nations: Costa Rica, El Salvador, Guatemala, Honduras, and Nicaragua.

The land making up the nation of Belize did not become part of the Spanish Empire due to its lack of precious metal resources and its proximity to strongly held Mayan defensive positions. The British eventually began to settle the area for use in military engagements with the Spanish. Belize was called British Honduras from 1862-1973 before gaining its independence in 1981. It is strategically located between Central America, the Caribbean, and the Mexican/American north. Belize, thus, also acts as a cultural bridge between the Anglophone Caribbean/America and the broader Spanish-speaking world around it.


This post originally appeared on Anthropology of Accord on July 6, 2015.
Posted by Andrew Lynch at 6:00 AM