Remembering 9/11: The best tribute will be to name our real enemy 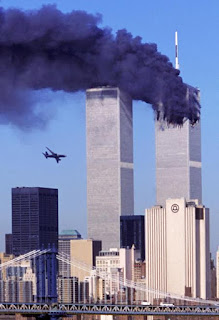 
The new alliance between Russia and the US in Syria is a fundamental change in policy that we have advocated for several years. Donald Trump has been dismissed as an incompetent ignoramus by the Washington think tanks for a similar proposal. Hillary Clinton and the Republican media neocons have found Mr. Trump’s rejection of their bipartisan failed strategy to be evidence of his unfitness for office. Now what will they say? President Obama and Secretary of State Kerry are finally realigning America with serious allies against our real enemies. This is a fundamental reformulation of policy which neither the George Bush White House nor the Hillary Clinton State Department could imagine in their Saudi-constructed vision of the US, Islam, and the war on terror. President Obama has decisively broken with what he calls "the Washington playbook" of think tanks and the national security establishment. As his presidency comes to an end, he has liberated himself from the "Arab occupied territory" which is a White House staff term for the many institutes funded by foreign governments pushing their own war aims as expert opinion. This alliance may be extremely short lived and this first attempt may quickly crash but it points the way conceptually and strategically to the only realignment of forces which will bring victory. Prayer may be our only hope that the partisan media and somnolent Congress will awaken to this startling departure from Sunni group-think and see the opportunity it presents for a reformulation of American war aims.

This recent report from Christians in Aleppo shows why the US must turn from supporting the Saudi-backed Salafist rebels, and help Russia and Syria establish safety for Christians, Shiites, and peace-seeking Sunnis in Syria and Lebanon. Many pundits mocked the Libertarian presidential candidate, Gary Johnson, for not knowing how to respond to the question, "What about Aleppo?" The NY Times in reporting the episode had to make two corrections of their own errors in describing the city that was Syria's largest before the civil war began in 2011. Instead of mocking the new guys at the table we might better reflect on why this geography has became important to Americans. That will lead us to the truly confused foreign policymakers from Hillary Clinton to John McCain who have involved us on the side of jihadist Sunnis in trying to overthrow the Syrian government.

The best way to honor our dead from 15 years ago is to align a new group of forces to define and defeat the real enemy who murdered our countrymen.