Many historians lump Nazi Germany, Imperial Japan, Mussolini’s Italy, and Franco’s Spain as the "fascists" of the twentieth century. Such a lumping was convenient for the anti-fascist coalition of Joseph Stalin, and is perpetuated by critics of the "authoritarian personality" today. This leaves us, though, quite ignorant of the Catholic nationalism of Franco, the Hegelian fascism of Mussolini, the Darwinian racism of Hitler, and the religious racialism of Shinto Japan. Each of these was a distinct type of social organization shaping a people in response to the bloody twentieth century. 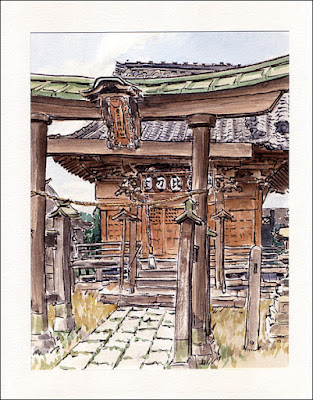 Shinto Japan was a spiritual military response against the West’s armed materialism and Social Darwinism poisoning Asia. Integrating mass participation with a revitalized Shrine Shintoism centered on a Divine Emperor is called "radical Shinto ultranationalism" in Walter Skya’s 2009 book, Japan’s Holy War. Skya's fidelity to Japanese sources untapped by previous scholars and his willingness to treat religious and spiritual forces as major determinants in social organization have given us the best intellectual history yet of the spiritual organism that was the 20th-century Japanese nation. (Review of book -- scroll down to page 144).

Revitalizing its centuries-old religion into a more organized  hierarchically ordered shrine-centered Shintoism was a fundamental aspect of the Meiji restoration (1857). This was deeply intensified in the first decades of the 1900s as state and familial theories of the sovereign gave way to a more organic sense of a Divine Emperor linked to the mass participation of the people in a Holy Nation. Shinto means the way of the Kami, or spirits or gods. The original creation narrative was centered on sexual order, the physical islands of Japan, and the ethnic continuity of the Japanese people. The Kokutai, or form of the Japanese polity, has been ruled by an unbroken chain of emperors "come from the same womb" of Amaterasu Omikami — the Sun goddess. The emperors are, in fact, the living reincarnation of Amaterasu. All of the people of Japan are meant to unite as one body under the head of the Emperor, breathing with the same lungs, beating as a single heart. The army, especially, becomes his limbs and the farmers his working arms. The Japanese are not a chosen people called from the many peoples created as a single humanity. The Japanese are a unique creation separated from other peoples by their story of origin.

The binding of the person in the sacred order of the Kami occurs through rituals consecrating  different life events. These must be performed in set aside holy ground. At the official and hierarchically ordered shrines there are different Kami to encounter. Coming to a shrine and performing the proper rituals brings a person in contact with the spiritual order. The goal of life is to become one as a people, as the people become one with the Kami. To die for the Emperor is to more fully enter into union with him. Die to self and become a true being.

Mr. Skya describes an important Japanese thinker: "Being was being only in so far as it formed an organic part of an irreducible aggregate of Beings. The affirmation of the existence of one's own being was possible only in the recognition of the interdependent existence of the self with the other selves in an organic reality …The movement of being related in a cause and effect relationship with other beings in a spatial environment was called man’s sokan. There also was the interrelationship with other beings in time, which he called man’s renzoku. Each being mutually and interdependently developing and perfecting the self in relation to other selves in a definite spatial temporal matrix was called hito no sokan to renoku. The mutual development and perfection of beings in this spatio-temporal matrix is called morality. Useugi’s concept of being was not limited to living beings with the living...It also included spiritual beings..the spirit of those who had come before us…"

This was not the atheist Darwinian racism of Hitler!

(From the linked review): "Another of Skya’s key themes pertains to the worldview of Shinto ultra-nationalists. Their goal was the establishment of a new world order based on the concept of Japanese imperial rule that was to replace the Wilsonian-inspired world order of 'democratic internationalism' that had been institutionalized through the League of Nations after World War I. Again, it was this so-called 'divine oneness' of the Japanese nation that was an attribute not shared by any other people. “ China, for example, was not one nation, but "a space where five major competing ethnic nations (Han, Manchu, Mongol, Uighur,and Tibetan) vied for dominance." (Doak, 2001). "Therefore, the rule of the Japanese emperor should have encompassed the globe since no other people could stand on an equal level with the pure Japanese in their sacred land. Thus, the worldview of these proponents of Shinto ultranationalism was that the war that they waged in the Pacific was a civilizational and religious conflict between a divinely governed theocratic Japanese empire and a secular global order created and controlled by the imperialist nations of the West." 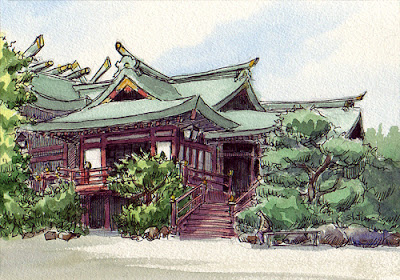 Christopher Dawson has written about Nazi Germany and the Soviet Union: "The racialist ideology like the Communist ideology... was an attempt to find a substitute for the spiritual reality in some other social element which is primary and indestructible. But Europe... was a spiritual reality and cannot be replaced by a biological or economic unit, for these belong to a different plane of social reality."

His words do not as aptly describe the Japanese who were consciously organizing a spiritual principle "opposed to western individualism and materialism."

When we consider Japan in the language of "social capital" we contrast their incredible ability to "bond within the in group" and their spectacular failure to "bridge to the out group." Certainly, though, there is more of a lesson to be learned here than painting Japan as just another fascist state. They achieved a deep level of human cooperation that defended the Eastern peoples from the rapaciousness of their foreign invaders. When one reads from the seminal 1937 document, Kokutai no Hungi (Fundamentals of Our National Polity), of botsuga kiitsu ("casting aside self to return to the One" or "dying to self and returning to the one") one is brought into the temporal/spatial sacred matrix of the Catholic Mass. The description of the spiritual and organic union of the Japanese under the Emperor is striking to anyone familiar with the ecclesiology of the Mystical Body of Christ. The Japanese who wrote the document were fully conscious that they were attacking the entire intellectual structure of the European Enlightenment, which as religious patriots they saw as a well-armed human catastrophe. The Japanese felt Western thinkers had adopted the social Darwinism model of humanity that held perpetual conflict -- not harmony -- as the basic reality in nature. They saw Western thinking as based on individuals and families with a mechanistic view of the state. They considered this lack of a more organic sense of the polity as a great impoverishment of the West; and they blamed Christianity for positing universal loyalties over the nation, and the Enlightenment for elevating the individual over the social group. They employed Aristotle to scold the Western thinkers for forgetting that man gains his true identity in the polis. Without that, he is an idiot (idios—entirely unto oneself). This deficit in more organic thinking about the polity remains a serious problem in Catholic social teaching today.

There are powerful Kami in Japan. So many great souls loved and died. So many killed others so harshly. We cannot lose their social courage or their spiritual sensibilities of union, beauty, and natural order. We cannot overlook the terrible slaughter. Certainly the Japanese spiritual and intellectual thinkers were right that the individualism and materialism of the Western empires couldn’t be the principle of social organization for humanity and the nations—not then and not now. 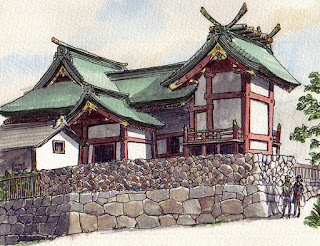 [Sketches of Shinto shrines by Russell Stutler, a Protestant missionary to Japan who converted to Catholicism several years ago.]  AOA geographical profile of Japan.