The Physical Ecology, Communal Loyalties, and Geopolitics of Syria 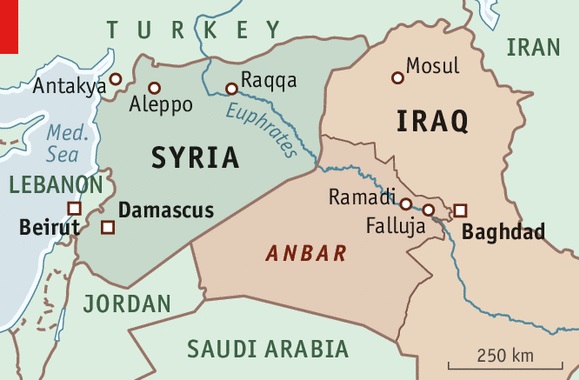 Syria is a nation about the size of Wisconsin but with four times the population (23 million vs. 5.5 million).  About a fourth of its land is fit for agricultural use. Syria is situated on the eastern end of the Mediterranean, wedged in between many contending powers of the Middle East. Syria is bisected into north and south by mountain ranges which run from its border with Lebanon to the Euphrates river in the east. In its far south, another mountain range anchors Syria's border with Jordan. The Golan Heights may be found along its border with Israel - but this area has come under Israeli control since the Six-Day War and annexed in all but name in 1981 (the western end of Golan Heights actually includes almost the entire eastern bank of the Sea of Galilee).

Syria's climate can be described in three zones. The western (coastal) and northern regions consist of cultivated land where fruits, olives, and tobacco are grown. Bordering this area to the south and east are steppe-lands where one may find nomads and sheep herders. As one travels further south and east, the steppe gives way to desert. The one exception to this is the Euphrates River which runs from the northwest through the southeastern corner of Syria into Iraq's Anbar province. Along the Euphrates are cultivated lands where sheep are raised and wheat is grown.

Among Syria's natural resources are petroleum, phosphates, chrome and manganese ores, asphalt, iron ore, rock salt, marble, gypsum, and hydropower. Sales of oil comprised 20% of Syria's GDP prior to the civil war with the vast majority of it sold to the European Union. With the spread of ISIS, there have been times that the Islamic State has produced and sold more Syrian oil than the Syrian government. Syria's top two oil refineries are today operating at less than 10% capacity. Syria's phosphate mines (located outside of Palmyra in the heart of Syria) were captured by the Islamic State in May 2015; and in June the Islamic State destroyed the gas pipelines to Damascus which were to heat its homes in the months ahead. The Islamic State is working hard to deny Syria access to its own natural resources.

The Arabic language is used across Syria, with several major dialects. The nation is a smorgasbord of ethnic groups (see map below). Approximately 60% of Syria is comprised of Sunni Arab Muslims. The rest of Syria's population is made up of various minorities like the Sunni Kurds (9%) in the north,  Shiite Alawites (12%) on the Mediterranean coast, Levantines - Arabic speaking Christians (9%) further inland from the coast, Druze (3%) in the south, and small Shia-Islamic groups (like the Ismaillis and Imamis) at a combined 3% of the population.

Colonial rule often employed ethnic and religious minorities opposed to the Sunni majority. The map reveals the disparate nature of this alliance. The Kurds are off in the extreme north and northeast while the Druze are located in the extreme south. Alawaites and Christians are located much closer to the Mediterranean coast, isolated from both Druze and Kurds.

Syrians also remember historical groupings of "Greater Syria." A term originating with Ottomans, it not only referred to present-day Syria, but it also included Lebanon, Jordan, Israel, the Sinai Peninsula, and the city of Antioch (the pre-Islamic capital of Syria now under Turkish rule). Syrian nationalist, Antun Saadeh, sought the creation of a pan-Syrian state to include the areas above along with Iraq. He grounded his vision in the region's physical geography by fixing the limits of Greater Syria with the following natural boundaries: the Taurus and Zagros Mountains in the north, deserts and the Persian Gulf in the east and south, the Gulf of Aquaba and Suez Canal in the southwest, and the Mediterranean island of Cyprus in the far west. While the modern Syrian state has never expanded to this extent, the Hashemites of Jordan had been promised rule over a Greater Syria for  helping the British defeat the Ottomans during WWI. The Hashemites once controlled Iraq, the western edge of Saudi Arabia, and parts of what is today Israel.

Syria's internal communal loyalties define its geopolitics. If we were to divide Syria into four main groups - Arab Sunnis (60%), Shiites and other Muslim minorities (19% ), Christians (10%), and Kurds (9%) - we have a good idea which nations will be lining up to support these four ethnic and religious peoples. Here, religion is the key to understanding the current struggle.

President Assad is part of the Alawite Shiite tradition which has dominated the Syrian officer ranks for a half century.  His father was Hafez-al-Assad and the leader of the nationalist-socialist movement in the secular Baath party. He assumed rule in the “Corrective Movement “ of 1970.  The father ruled until 2000 and was succeeded by his son.  The predominance of Alawite Shia in the military was fostered during French rule which favored minority groups over the Sunni majority in positions of military authority. Check out this excellent short history of the Baath party, Arab nationalism, ethnic differences and the Sunni-Alawite rivalry in 20th century Syrian history.

President Assad has protected the minority Christians, Druze and Kurds. He also has a considerable number of Sunnis in his government. Shiite Iran and Orthodox Russia will support his state. The Lebanese Shiites (Hezbollah) and Maronite Christians will not want to see the Syrian government  fall. The Sunni majority in the East may reconfigure themselves with the Sunnis in the Western regions of Iraq. Among the rebels, the Salafist Sunnis are establishing control over the opposition forces. This is ISIS and Al Qaeda (al Nusra in Syria). They will be supported by Saudi Arabia (salafist Sunni) and the Gulf States. The Syrian civil war seems similar to the Spanish Civil War where the local conflict provided a battleground attracting foreign recruits eager to depose the “fascist Franco.” Those international recruits were predominately Communist while the Syrian foreign fighters are principally Salafist Sunnis. Both of these killing movements masked their claims as battles for popular democracy.

The alliance between Iran and Syria is multifaceted. A reliable American who's reporting and analyzing Syria is Oklahoma professor Joshua Landis.


The Turks along Syria's northern border are Sunni Muslims - but their Turkic ethnicity makes them stand apart from the broader Arab Muslim Middle East. Turkey sees Syria in a few different ways: 1) Syria is a place to show Turkish might and win a renewed place of leadership in the Muslim world (recall Turkey was at the heart of the last Islamic caliphate - the Ottoman Empire); 2) intervention in Syria is meant to keep the Kurds from controlling Syria's northern border since Turkey has long worked to control the Kurdish minority within Turkey proper; 3) Turkey, like the Saudis, would like to see President Assad toppled and replaced with a Sunni. The Kurds of Syria -- like those of Iraq, Iran, and Turkey -- seek autonomy, and then a nation.

Update 11-20-2016:The election of Donald Trump and his advocacy of a Russian Syrian alliance will dramatically improve American strategy in the Mideast. We have advocated this change for several years.

Update (10/10/16): Syrian War Video: The short and excellent video below from Vox offers a concise overview of the Syrian War, the various factions, and a timeline narrative. It is well worth five minutes of your time to watch.

For more information on Syria, visit its page on the CIA World Factbook.

For more information on the region, see the following previous Map on Monday posts:


This post originally appeared on Anthropology of Accord on September 14, 2015
Posted by Andrew Lynch at 6:00 AM