Yes, folks, that is America's vice-president during her bicentennial year -- as he salutes student demonstrators in Binghamton, New York.

Behind Mr. Rockefeller at the campaign stop is Bob Dole, whom President Ford had chosen as his running mate (they would be defeated by Carter/Mondale).


The recent biography by Richard Norton Smith has received high praise. Mr. Smith has been the director of five of the presidential libraries. Here are excerpts from a review in the 'Wall St Journal':


It was the most memorable scene from the 1964 Republican National Convention in San Francisco: Nelson Rockefeller standing tall on the speakers’ platform, insistent on having his say—“This is still a free country, ladies and gentlemen”—as conservative yahoos below sent up a roar of hatred to this embodiment of the despised Eastern Establishment who dared denounce extremism. Operatives of the party’s impending presidential nominee, Barry Goldwater, aware of the damage the nationally televised scene was doing to his image, frantically tried to quiet the delegates, but to no avail.

So the scene made its fateful impression, not only of extremism on display but of its brave antagonist. Rockefeller, wrote Norman Mailer in 'Esquire' later that year, “had an odd courage which was profound—he could take strength from defying a mob. Three hundred thousand years ago, a million years ago, some gorilla must have stood up to an enraged tribe and bellowed back and got away alive and human society was begun. So Rocky finally had his political moment which was precisely right for him.”

Richard Norton Smith builds a 20-page prologue around that telling moment in his splendid biography of Rockefeller. On His Own Terms is a clear-eyed, exhaustively researched account of a significant and fascinating American life.

In retrospect, Rockefeller’s moment in San Francisco told of more than his courage and a changing GOP. It also vividly suggested that, if he wanted to be president, he was in the wrong party. It was not the first such suggestion. Franklin D. Roosevelt had tried to get Rockefeller, his coordinator of inter-American affairs during World War II, to change his political affiliation. Harry Truman, too, had urged him to become a Democrat. Rockefeller’s answer: “If I became a Democrat, I’d always be in the position of holding the party back, whereas if I stayed a Republican, I’d be pushing the party forward.” He wanted the presidency but, as Mr. Smith’s title suggests, on his own terms.

When Rockefeller made his entry into elective politics, running for governor of New York in 1958, he proved a terrific campaigner, plunging into crowds, heartily offering a “Hiya fella!” to one and all, enthusiastically eating blintzes and giving voters the impression that he was a backslapping regular guy. In a year in which the GOP nationally suffered its worst defeat since 1936, he crushed incumbent Democratic Gov. Averell Harriman by 557,000 votes.

In contrast with his New York campaigns, Rockefeller’s repeated efforts to win the presidency in the 1960s “appeared amateurish,” Mr. Smith notes...

But Rockefeller was unmistakably different, not least in his strong support for the civil-rights movement. (He provided money to Martin Luther King Jr. and his crusade at various junctures, such as when he helped pay the bail costs for hundreds of youngsters who had been jailed after marching in Birmingham, Ala., in 1963.) “The struggle for racial equality is as much a part of his family lineage as oil wells and art museums,” Mr. Smith observes. Rockefeller’s grandfather had endowed Atlanta’s Spelman College to educate black women; his father had supported the United Negro College Fund and the Urban League. When Rockefeller was vice president under Gerald Ford in the mid-1970s, his support for filibuster reform in the Senate and for a tough Voting Rights Act fired Southern opposition and, by some accounts, led to his being dropped from the 1976 ticket.

During Rockefeller’s 35 years of public life, two things were kept largely hidden. One was his compulsive philandering, which only began to come to light in 1979 with his sensational death in the company of his latest mistress. (It had not taken an aggressive press long to shred the official fiction that his fatal heart attack had occurred when he was at his desk, working in his office, alone except for a security aide.) The other hidden trait was his dyslexia, a condition that is generally characterized, as Mr. Smith says, by “poor reading, writing, and spelling skills, the misuse of words, and the transposition of numbers.” This difficulty helped to shape his approach to public life, giving him a preference for the visual over the written and a pronounced inclination to rely on supposed experts as a kind of “intellectual security blanket.”

Rockefeller liked to use visual aids to get his points across. Early in the Eisenhower administration, when he became undersecretary at the new Department of Health, Education, and Welfare, he insisted on a bigger conference room, opening up his own wallet to equip it. He turned the large space into “the Chart Room” and took over an adjoining room to serve as a staging area, from which the charts could be rolled out on tracks.

His difficulty reading persuaded him that, as he said, “the best way to read a book is to get the author to tell you about it.” When he was governor of New York and trying to fathom the moral complexities of abortion, he saw a reference to Thomas Aquinas in a newspaper editorial and asked a staffer to arrange a meeting with the eminent theologian.

When venturing forth to meet a new challenge, Rockefeller resorted almost reflexively to summoning experts to advise him. After he left HEW in late 1954, he became a special assistant to President Dwight Eisenhower for “psychological warfare” (or, as Ike later described it, for “Cold War strategy”), with a vague mandate to explain America to the world. Taking the mandate and, to the dismay of the State Department, running with it, Rockefeller assembled a panel of academic heavyweights in advance of the 1955 Geneva Summit. The group’s brainstorming led to Eisenhower’s proposal there for “open skies” aerial inspection of military facilities on American and Soviet soil. Rejected by the Soviets, the proposal proved a propaganda coup for the U.S., showing the Soviets to be not as committed to nuclear disarmament as they pretended. The brainstorming group’s success, Mr. Smith observes, “foreshadowed [Rockefeller’s] later reliance, as governor of New York and would-be president, on a dizzying array of study groups, commissions, and grand planners.” Yet doubts arose about the practice. “He is too used to borrowing brains instead of using his own,” Ike once observed...

Rockefeller had no liberal guilt about his inherited wealth. Once, on the campaign trail, a young woman asked him how it felt to be rich. “Fine!” he replied. “How’s it feel to be good-looking?”

... After his death, no less a conservative than William F. Buckley, long impressed by Rockefeller’s staunch anticommunism and more recently by his ability as governor to learn from his mistakes, wrote—in a judgment that would have appalled the yahoos at the 1964 convention—that it was “altogether possible” that Rockefeller “would have been a great president.”

Here are some lines by Mark Tooley, from his interesting profile of Nelson Rockefeller as Social Gospel Christian: "He was an enthusiast for American democracy and hated Communism. One campaign aide who worked for him, Reagan, and Goldwater claimed Rockefeller was the most passionately anti-Soviet of all of them."

"The grandson of America’s first billionaire, Rockefeller was born into a pious Baptist home where liquor, smoking and profanity were prohibited, family prayers were a daily ritual, and the Sabbath always sacred. His grandfather, John Sr., the builder of an oil empire, was a conventional but not very theologically minded Baptist. His father, John Jr., the heir and only son, was devout but committed to modernizing Christianity under the guidance of experts he would fund. His counsel for philanthropy was Raymond Fosdick, a backslidden Baptist who championed cautiously progressive causes. Fosdick was brother to the great liberal preacher Harry Emerson, a zealous foe of 'fundamentalism' who had survived a Presbyterian heresy trial.

"John Jr. so admired Rev. Fosdick that he funded his tracts and built a cathedral for him on New York’s upper West side, Riverside Church, where Protestantism and modernity were merged together by Fosdick’s sermons and the church’s progressive iconography. The church was and is next door to Union Seminary, once Baptist, and long an academy of liberal Protestantism, also supported by the Rockefellers. In the same neighborhood in the late 1950s the Rockefellers also built the soaring Interchurch Center as headquarters for liberal Protestant denominational and ecumenical agencies.

"Earnest, chaste, sober, punctilious, generous, and committed to social uplift, John Jr. and his more exuberant wife Abby raised their five sons to be conventionally moral but theologically liberal Baptists who would perpetuate the family tradition of high-minded philanthropy..."


UPDATE: This is a 1932 photo of Nelson with his grandfather -- John D. Rockefeller (bottom right) -- the founding patriarch. Take a look at this five-minute video. 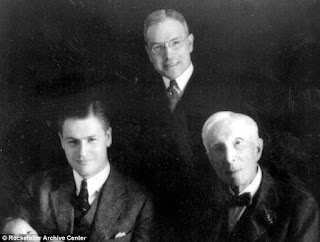 [Nelson's father, John Jr., is in the center. He spent his life as a philanthropist, and died in 1960.
Richard Norton Smith -- in this lengthy interview with Brian Lamb -- said of John Jr.: "I think, of all the Rockefellers, he was probably the most complicated figure."

Mr. Smith also tells of Richard Nixon's secret visit to Rockefeller in July 1960, as he unsuccessfully urged him to be his vice-presidential running mate. The NY governor asked for two changes in the party platform: a stronger civil rights plank, and a promise to spend more on defense. He had not been happy with President Eisenhower's cost-cutting measures.]