The Physical Ecology, Communal Loyalties, and Geopolitics of Bangladesh 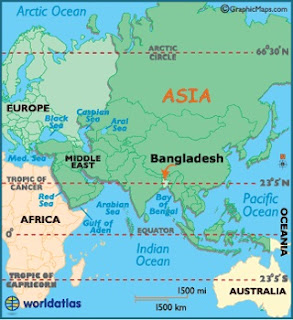 Bangladesh is a small, Asian nation about the size of Iowa. Located along the Tropic of Cancer on the Bay of Bengal, Bangladesh is subject to a humid, wet, monsoon climate. Furthermore, around 75% of Bangladesh is less than 10 yards above sea level. This, combined with the great Ganges, Brahmaputra, and Meghna Rivers, makes Bangladesh both fertile but also susceptible to flooding.

Nearly 20% of the nation is flooded each year, destroying seven million homes and killing around 5,000 people. In heavy flooding years, the vast majority of the nation is flooded, tens of thousands are killed or displaced, and millions of dollars of agriculture are lost. Over a half million Bengalis perished in 1970 due precisely to this.

Bangladesh is rich in arable land, timber, and coal. While Bangladesh imports crude oil and petroleum products, it is Asia's seventh largest producer of natural gas. Agriculture plays a key role in the nation's economy, with tea, rice, sugarcane, cotton, and jute (used in ropes and textiles) being important cash crops. Access to the sea has also made the nation the world's fifth largest producer of fish. The textile industry of Bangladesh is ranked as the second-largest across the globe.

In 1951, the population of Bangladesh was around 44 million. That population has grown to over 160 million today, making Bangladesh the world's eighth most-populous nation - and its small (Iowa) size means Bangladesh is the most densely-populated nation in the world (excluding micro-states). Around 18.5 million live in either the capital city of Dhaka (12 million) or the port city of Chittagong (the largest seaport in the eastern Bay of Bengal).

Some 98% of the population is ethnically Bengali and speak Bengali as their primary language. Bangladesh is also a majority-Muslim nation with Sunni Islam comprising nearly 90% of the nation populace. A small Shiite-Muslim minority lives mostly in urban areas of Bangladesh. Around 9% of the population is Hindu while Buddhists and Christians each holding less than 1%. 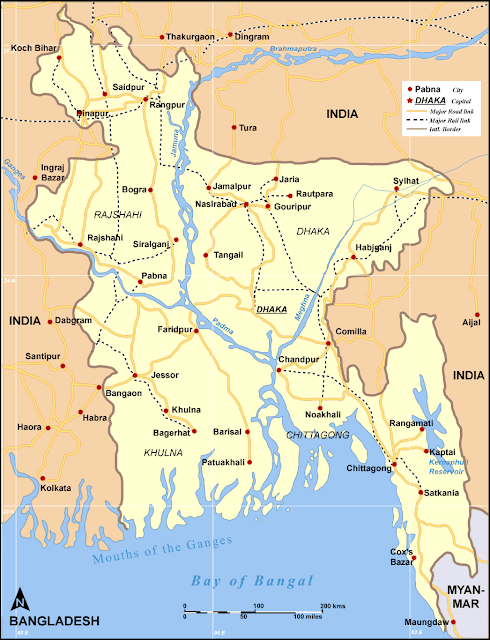 A brief sketch of Bangladesh's history is important for understanding its geopolitics. Although Hinduism has a long history in the country, Islam - the dominant religion of the nation - came to Bangladesh in 1204 (the same year the 4th Crusade sacked Constantinople). By 1500, Muslims had forged a large Bengal Sultanate with political links to Ming China, Indonesia, and the Ottoman Empire. In 1517 (the same year Martin Luther posted his 95 Theses), Portuguese traders began coming to Bengal and soon building factories. Following the Battle of Plassey in 1757, the area came under the control of British East India Company. British power in the wider area soon encompassed what is today India, Pakistan, and Bangladesh. Although victorious in World War II, the bankrupted British began withdrawing from the region.

In 1947, India became a separate nation from a new Islamic-based nation that included both Pakistan (formerly "West Pakistan") and Bangladesh (formerly "East Pakistan"). Language and ethnicity, combined with distance, drove division between the two halves of the nation. Although the Bengalis outnumbered the Pakistanis, West Pakistan controlled the military and higher government offices. Urdu (the official language of Pakistan) became the sole official language and the Bengali language left unrecognized. This rejection led to the Bengali Language Movement and increasing tension between east and west through the 50s and 60s. In 1970 - the same year thousands died in a massive cyclone to little government response - the Bengalis concentrated their population against the Pakistanis in national elections, winning a majority in the National Assembly. The new government, however, was not allowed to sit and its leaders forced to flee into India. This was the beginning of the Bangladeshi Liberation War.

India's support for a free Bangladesh brought it to war with Pakistan and made it a regional partner to the fledgling new nation. The war also witnessed the 1971 Bangladeshi genocide in which Pakistani militias killed between 300,000 and 3 million Bengalis. India and Bangladesh, however, proved victorious, and the Pakistanis surrendered at Dhaka on December 16, 1971. In the period thereafter, Bangladesh remained non-aligned in its foreign policy. It has, however, specifically sought to build fraternity with other Muslim nations. In 1997, Bangladesh co-founded the "Developing Eight" along with Islamic Egypt, Indonesia, Iran, Malaysia, Pakistan, Turkey, and (about 50% Muslim) Nigeria. Today Bangladesh still holds good relations with India and Great Britain, but has sought investment from Japan and China while purchasing Russian and Chinese military equipment. As a Muslim nation in east Asia, the United States has forged a strong relationship with Bangladesh in terms of anti-terror operations (in 1991, Bangladesh also gave 2.300 troops for the liberation of Kuwait from Saddam Hussein).

For more information on Bangladesh, visit its page on the CIA World Factbook.

The video series, Geography Now!, offers additional information on Bangladesh through a short video.
Posted by Andrew Lynch at 6:00 AM